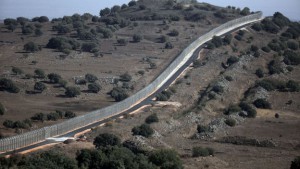 A picture taken from the Israeli-occupied Golan Heights on August 30, 2014 shows the Israeli border with Syria near the Quneitra crossing, the only border crossing between Israel and Syria. UN peacekeepers caught up in heavy fighting on the Golan Heights were evacuated as the fate of more than 110 of their colleagues captured by Syrian rebels remained uncertain. Irish soldiers with UNDOF, which is responsible for ensuring the maintenance of the armistice line between Israel and Syria, took part in an evacuation of UN troops during today’s fighting, the Irish military said in a statement. AFP PHOTO / AHMAD GHARABLI