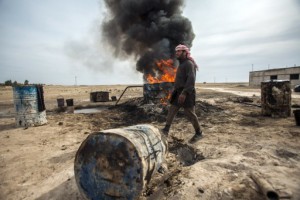 TO GO WITH AFP STORY BY JOSE MIGUEL CALATAYUD
A picture taken on April 15, 2013 shows a Syrian man in the Al Raqqa countryside, who until three months ago was a farmer, pouring crude oil brought from Deir Ezzor province into a pit where it will be distilled as part of the refining process to produce fuel. Final products such as benzine and diesel are then sold to locals. Deir Ezzor contains the largest energy reserves in Syria, which produced some 420,000 of barrels of oil a day before the United States and the European Union banned the import of Syrian petroleum in 2011. AFP PHOTO/ALICE MARTINS