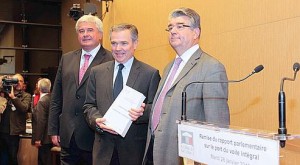 French President of National Assembly Bernard Accoyer (C) receives the report of the parliament commission working on the wearing of the full veil on January 26, 2010 in Paris near the head Andre Gerin (R) and the speaker of the commission Eric Raoult (L). The reports calls for a ban on the full Islamic veil, saying Muslim women who wear the burqa were challenging French values in an unacceptable manner. After six months of hearings, a panel of 32 lawmakers recommended a ban on the face-covering veil in all schools, hospitals, public transport and government offices, the broadest move yet to restrict Muslim dress in France. AFP PHOTO/JACQUES DEMARTHON