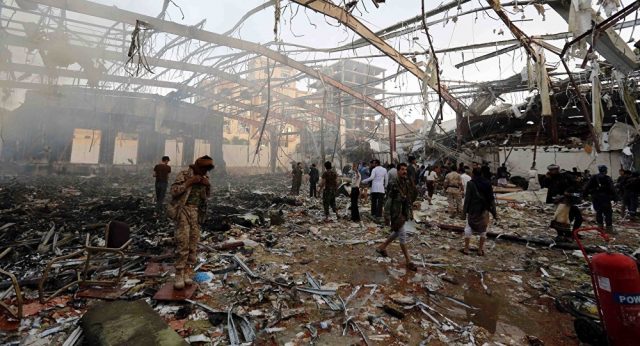 Almost three years have passed since Saudi Arabia announced it was intervening militarily, with its allies, in Yemen, to remove the Houthis (officially called Ansar Allah) from power after they had taken over the capital. Western analysts saw it as a bold move from recently-empowered (deputy) crown prince Mohammad bin Salman (MbS), weapons manufacturers and their political representatives were delighted. But what had been predicted as a swift military operation has turned into a humiliating stalemate. Unable to impose its will by force, Saudi Arabia and its bold prince have resorted to war crimes and collective punishment, imposing a humanitarian catastrophe on the Yemeni people.

The lack of media interest makes it seem like a crisis unfolding in slow motion. But that is only because outrage and compassion are now meant to be weaponised when they can be useful in justifying imperialist interventions. For the Yemeni people the agony is real and there is no escaping it. In what was already the poorest country in the region, the Saudi-led bombings of infrastructure and the blockade imposed on Yemeni ports have left millions on the brink.

According to UN estimates, 17 million Yemenis, more than 60% of the population, are in urgent need of food. Out of these, 7 million are facing famine. The destruction of infrastructure has also left 15 million without any access to healthcare and generated an unprecedented cholera outbreak, with 900.000 cases and thousands dead already. 50.000 Yemeni children have died in 2017 as a result of disease and starvation. There is no hyperbole needed, this is a humanitarian disaster that is beyond words. Only it is not a natural catastrophe. More than something that is being allowed to happen, it is something that is being deliberately imposed on the Yemeni people.

As the Syrian army moved to re-take eastern Aleppo, a monumental PR campaign saw people who had never bothered before rise up from their Starbucks couches to proclaim that humanity had lost its ways. One day, hopefully, people will wonder how large swaths of western public opinion were manipulated into working in a propaganda stunt to defend a city held by al-Qaida (1). Months earlier we were bombarded by the media about the siege of Madaya, where 40.000 people were being starved to death (2). Yet now, with an entire country on the brink of famine, the media silence is telling. 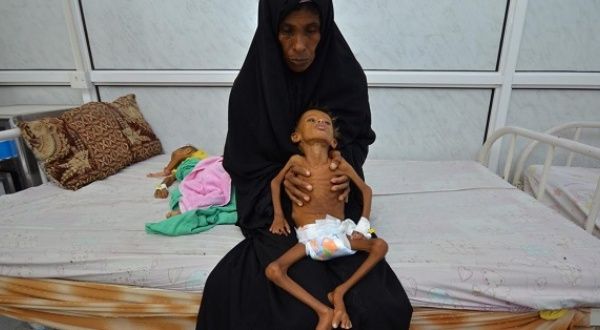 Saudi-led bombings and blockade of ports have created a humanitarian nightmare in Yemen, with millions threatened by famine.

Anyone can voice their horror at a hospital being bombed in Syria. The issue here is not one of comparing tragedies and demanding proportional levels of outrage. The issue is that the West is directly responsible for the tragedy in Yemen. Western companies supply the weapons, western military advisors are involved in the intelligence work and the selection of targets, US airplanes are refuelling Saudi (and coalition) jets as they carry out their savage bombings in Yemen. The supposed outrage is not connected to any concern for human rights, it is merely a foreign policy propaganda trick. And the main priority for people in the west should be to stop the crimes being committed, or abetted, by their own governments.

There is no point in invoking this or that convention, because all western governments and weapons manufacturers will claim that they do not sell weapons if they end up being used to commit human rights violations. But there is overwhelming evidence that war crimes are being committed left and right, from double-tap strikes to bombings of hospitals, schools, or even funerals, and nobody has suggested putting the brakes on this money train of weapons sales. Evidence of war crimes will be either ignored or, as British Foreign Secretary Boris Johnson suggested, left to the Saudis themselves to investigate!

Some media outlets could even be mistaken for Saudi propaganda pieces. The media coverage of MbS is nothing less than fawning in outlets such as the Guardian, not to mention the ineffable Thomas Friedman. And Saudi officials always get to voice their positions and denials through western outlets. One recurring example has a Saudi official denying that a given airstrike has been carried out by the Saudis, and the western media are happy to publish this without reminding their readers that nobody else is flying over Yemen. It is as if wayward bombs just wander into Yemen.

Even the United Nations has all but sidestepped its responsibilities. Its role is reduced to calling on Saudi Arabia to stop blocking the ports of a foreign country. The UN High Commissioner for Human Rights, a western puppet par excellence, is his latest report, mentions the horrific suffering in Yemen. But while the usual suspects (North Korea, Venezuela, Iran, etc) had all sorts of claims – real, exaggerated or fabricated – amplified in the report, Saudi Arabia is not even named as responsible for this situation, only “coalition airstrikes” are mentioned. 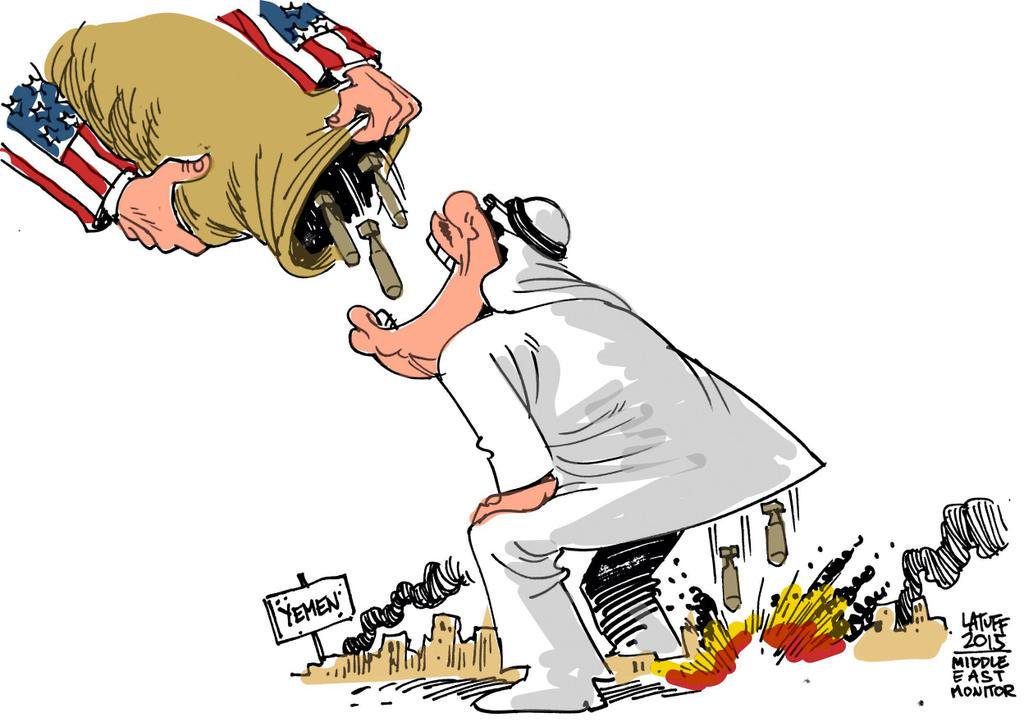 War, what is it good for?

Articles no longer wonder what this war is even about, and why it continues. Impunity on the global stage usually comes hand in hand with indifference in the media. For one, beyond the lucrative weapons dealing, it is a matter of letting the Saudis do what they want. With trillions of dollars looming large in the near future with major privatisation plans in motion, including of Saudi Aramco, letting millions of unworthy victims die in Yemen is a small price to pay. The Saudi crown prince can throw a tantrum, launch a deadly war and kill millions in the process and get away with it because he is sitting on a giant pile of money.

The “Iran is behind it” angle is not very convincing for anyone who can look at a map. Given that the Saudis and local allies control the gulf of Aden, Iranian ships laden with weapons cannot exactly waltz all the way to northern Yemen and Sanaa. The same applies to the airspace, which is entirely controlled by the Saudis. So while Iran may have managed to send some support and advisors, it is laughable to describe the Houthis as Iranian-controlled or even Iranian-backed. But as is often the case, bogeymen tend to have fantastical properties.

In the beginning of the war we often heard that the war was about restoring Yemen’s legitimate, democratically-elected government. Dozens of journalists wrote that the backward kingdom of Saudi Arabia was launching a war to restore democracy without sensing that something was off. The articles usually mentioned that Yemen was emerging from decades of dictatorship under Ali Abdullah Saleh. Saleh had ruled Yemen with an iron fist, and had been a useful ally both for Saudi Arabia and the US, which has been drone-bombing everything in the vicinity of a cellphone that once belonged to an alleged terror suspect (3). 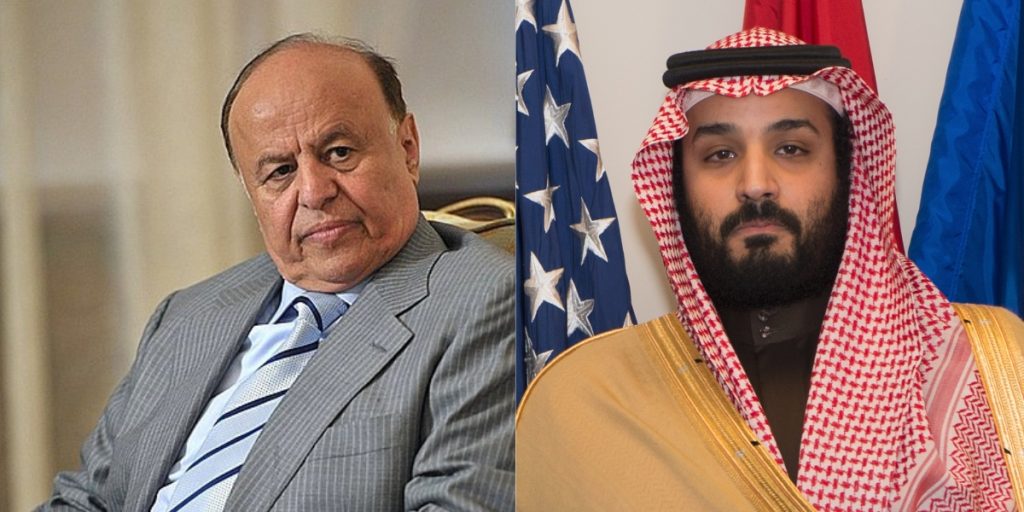 When massive protests starting in 2011 forced Saleh out, the US and the Saudis scrambled to salvage the situation. In the end they managed to get all parties, including the Houthis, to agree to a political transition. This included an election in which Abdrabbuh Mansour Hadi ran as the only candidate. So he is the legitimate president to be restored, but the media never mention that he had been vice-dictator for 20 years. One election with no other candidates and voilà, you get all the stamps you need from the western press.

What the articles also forget to mention is that Hadi’s term was supposed to finish in late 2014, and it was only after he did not deliver on political and economic measures that the Houthis seized power. Now, after almost three years of a Saudi war imposing death and misery on the Yemeni people on his behalf, who can refer to Hadi as being internationally recognised? What is that recognition even worth? And to add insult to injury, it seems Hadi is now allegedly under house arrest.

The Saudis latest gamble involved getting their former friend Saleh to turn against the Houthis (4). Given their long history of oppression at the hands of Saleh and the fact that there had been previous armed uprisings, this alliance was always going to be fragile. Saleh thought there was an opening, and Saudi air cover, for him to make a move and restore normal subservience to the northern neighbour. But the move backfired, Saleh ended up killed and, according to reports, the Houthis regained full control of the capital. Otherwise the media rehabilitation of Saleh as the man who restored Yemeni democracy would be in full-swing by now. 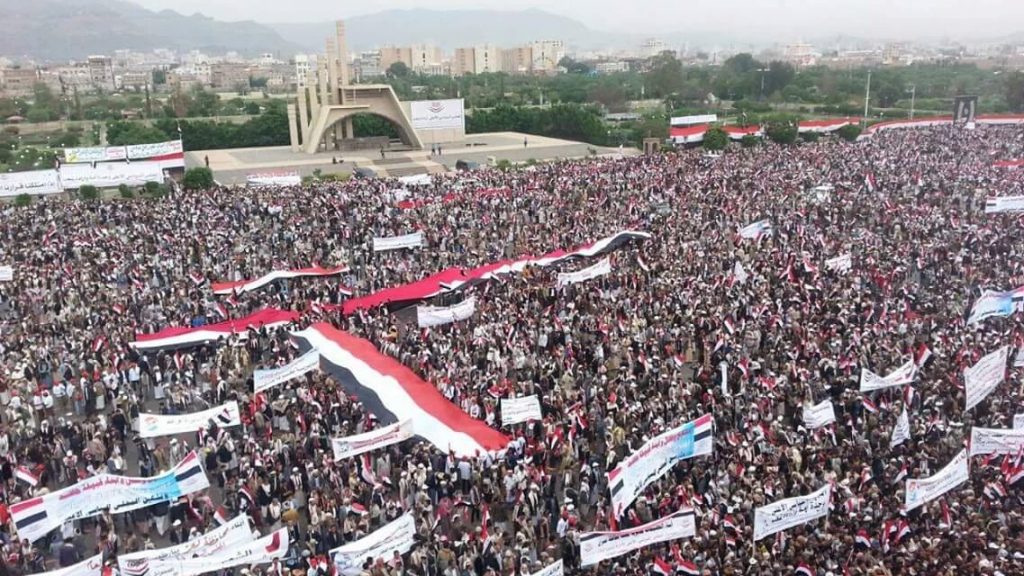 Massive demonstration in Sanaa against the Saudi-led bombing campaign in August 2016.

In summary, an entitled royal with a short temper and a large arsenal plunged himself into an endless war because Saudi Arabia, with its very fragile legitimacy, cannot tolerate an insubordinate neighbour. But it takes more than weapons, and the Saudis have lots of them, to subjugate a people. Only those who are too short-sighted or too eager to push the Iran angle cannot see that not only are the Houthis a Yemeni movement with ample support on the ground, they have also proven themselves a mighty opponent on their home turf.

The war has turned into a conflict that the Saudis cannot win, but still there is no end in sight. The Saudis are willing to let millions die because they can do so with impunity. And their western sponsors are also happy to let this genocide carry on. Because although it might cause some PR problems, it is, both in the short and long run, great for business, and at the end of the day that is what western foreign policy has always been about.

(1) For all the proclamations that the West is committed to fighting terrorism, with Saudi Arabia as their main ally (believe it or not), the reality on the ground tells a different story. Saudi-led troops have been happy to collude and even fight alongside al-Qaida on the battlefield. Terrorism can be a threat or, more usually, an asset to advance Western interests.

(2) This would be a matter for another essay, but Eva Bartlett has actually visited these places after they were re-taken by the Syrian army and found that the locals tell a story that differs significantly from the narrative of civilians deliberately starved by brutal regime while brave moderate rebels resisted.

(3) US intelligence agencies track their targets from their cellphone signals. With other people nearby, or the simple possibility of giving the cellphone to someone else, a high number of civilian casualties is to be expected. And this without going into the whole issue of US agencies deciding in secret who gets to live or die thousands of miles away.

(4) It is worth mentioning that both Saleh and the Houthis are from the (Shia) Zaydi branch of Islam. So much for the Orientalist assertion that these deeply-rooted economic and political grievances are at heart a dispute about the succession of the Prophet Muhammad…

Cover photo: In October 2016 Saudi Arabia struck a funeral hall in Sanaa twice in a space of minutes, killing over 150 people.