Why the occupation is no accident 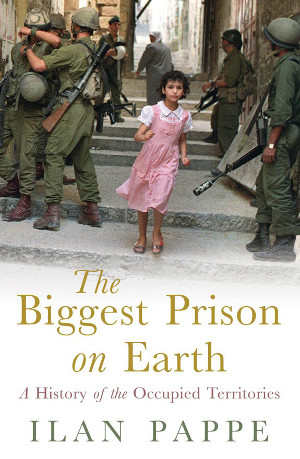 Rod Such reviews the latest book by Ilan Pappe, The Biggest Prison on Earth. A prominent Israeli historian, Ilan Pappe is also a close collaborator of Investig’Action. His book, in French, “La propagande d’Israel” (“Israel’s propaganda”) is available at our online store.

As early as 1963 – four years before the 1967 War – the Israeli government was planning the military and administrative takeover of the West Bank, according to The Biggest Prison on Earth, a new book by the Israeli historian Ilan Pappe.

The planning for that operation – codenamed Granit (granite) – took place over a month on the campus of Hebrew University in the Givat Ram neighborhood of western Jerusalem. Israeli military administrators responsible for overseeing Palestinians within Israel joined military legal officials, interior ministry figures and private attorneys to create the judicial and administrative decrees required to rule over the one million Palestinians then living in the West Bank.

These plans were part of a larger strategy for placing the West Bank under military occupation. That strategy was codenamed the Shacham Plan for the Israeli colonel, Mishael Shacham, who authored it, and was formally presented by the Israeli chief of general staff to the army on 1 May 1963.

Pappe has long maintained that the 1967 War and the occupation that followed was not the “accidental empire” described by liberal Zionists. A “Greater Israel” was envisioned as early as 1948, Pappe argues, and planning for it occurred as early as the 1956 Suez War.

What is new in The Biggest Prison on Earth is Pappe’s detailed accounting of exactly what the Israeli planners were contemplating in 1963; namely, “the largest ever mega-prison for a million and a half people – a number that would rise to four million – who are still today, in one way or another, incarcerated within the real or imaginary walls of this prison.”

Pappe’s description of the Givat Ram meetings is reminiscent of the way he opened his best-selling book, The Ethnic Cleansing of Palestine, with its depiction of the Red House in Tel Aviv where Plan Dalet (Plan D) – to expel nearly a million Palestinians – was hatched about 15 years earlier.

Pappe argues that the Israeli government understood in 1963 that it would be unable to carry out massive expulsions on the scale of the Nakba, the forced removal of Palestinians in 1948, due to international scrutiny. That explains why it set about designing a system of control and partition that would ensure a successful colonization of the West Bank, deprive Palestinians of their fundamental human rights by not granting citizenship and guarantee that their status as non-citizens in their own country would never be subject to negotiation.

Although the 1967 War did result in the expulsion of another 180,000 Palestinians (according to the United Nations) and perhaps as many as 300,000 (according to Robert Bowker’s book, Palestinian Refugees: Mythology, Identity, and the Search for Peace), the Givat Ram meetings and those that followed envisioned a kind of prison administration for the remaining Palestinians, Pappe argues.

As early as 15 June, three days after the conclusion of the war, a Committee of Directors General, comprising all the government ministries responsible for the newly occupied territories, began building what Pappe calls an “infrastructure for the imprisonment” of Palestinians. All of this planning, he writes, is now available in two volumes of public records totaling thousands of pages derived from the minutes of the committee meetings.

Almost immediately upon conclusion of the war, Israel began implementing a plan envisioned by Yigal Alon – a member of Israel’s parliament, the Knesset. The plan was to create de-Arabized “wedges,” chains of Jewish-only colonies in the West Bank “that would separate Palestinians from Palestinians and essentially annex parts of the West Bank to Israel.”

These wedges, initially in the Jordan Valley and the eastern mountains, would later be perfected by Ariel Sharon, Israel’s housing minister and later prime minister. Eventually, they would assume the concrete manifestations of a prison in the form of checkpoints, an apartheid wall and other physical barriers.

Pappe takes issue with the argument that the Jewish settlements, illegal under international law, resulted from a messianic religious nationalist movement, an argument advanced most articulately by Idith Zertal and Akiva Eldar in their book Lords of the Land: The War Over Israel’s Settlements in the Occupied Territories, 1967-2007. Instead, he provides evidence showing that secular Zionist governments, including that of Golda Meir of the Labor Party, courted this movement and used it to promote Israel’s expanded colonization.

It did not take long, however, before the government’s scheme engendered mass resistance, beginning with the first intifada of 1987-1993. The Oslo accords attempted to address this resistance

Pappe shows that the Oslo accords were never meant to result in Palestinian statehood and merely codified the creation of small cantons resembling apartheid South Africa’s bantustans with the added benefit that the costs and responsibilities of the occupation were largely transferred to major international donors and organizations – notably the European Union – and the newly created Palestinian Authority.

Here is where Pappe’s prison metaphor becomes most perceptive. As long as the PA carries out its security responsibilities and Palestinian resistance is muted, Palestinians can live in a minimum-security prison “without basic civil and human rights” but with the illusion of limited autonomy. As soon as resistance manifests itself, however, Israel imposes the controls of a maximum-security prison.

Everything that followed the 1967 War, notes Pappe, follows the “logic of settler colonialism” and that logic in turn foresees the eventual elimination of the indigenous Palestinians. That outcome, however, is not inevitable. An alternative is possible, Pappe maintains, if Israel decolonizes and makes “way for the logic of human and civil rights.”

Rod Such is a former editor for World Book and Encarta encyclopedias. He lives in Portland, Oregon, and is active with the Occupation-Free Portland campaign.

Why Are Countless Palestinian Photos and Films Buried in Israeli Archives?