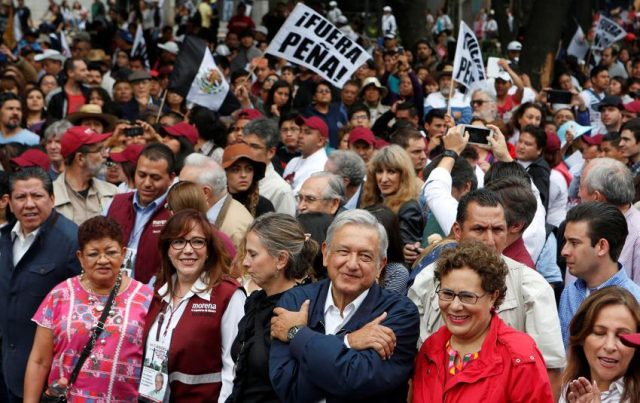 The slow-burn fire sale of Mexico’s public assets could be about to end – or at least, that’s what has market analysts worried.

“The market is not priced for this,” Schroders Investment Management’s emerging markets analyst Jim Barrineau recently told CNBC. Barrineau was referring to the very real possibility that a left-wing candidate might win Mexico’s July 1 presidential election.

“Since last year when the earliest polls showed [AMLO] with a lead, he has been a concern to investors,” Barrineau said.

Barrineau is right – at least about AMLO leading in the polls.

AMLO consistently fared either near or at the top of almost all major opinion surveys throughout last year. The latest such poll, by Buendia & Laredo in late January, found AMLO was winning with 32% support.

These numbers might sound low, but in today’s Mexico it is unusual for a winning candidate to secure any more than 30-40% of the vote. The last time this was done was in 2000, when the PAN’s Vicente Fox was elected with 42.5% of the vote.

So for now, AMLO’s chances of becoming Mexico’s next president remain high. As for why AMLO is scaring investors, the reasons are clear.

AMLO has long railed against Mexico’s far-reaching energy reforms, which his supporters have decried as a fire sale of the country’s natural resources. The centrepiece of the reforms was the current government’s dramatic 2014 decision to end state oil firm Pemex’s domestic monopoly.

In late January, the government carried out its largest auction to date of oil and gas concession blocks. Companies like Exxon Mobil and Royal Dutch Shell were invited to participate, though the outcome has not been made public at the time of writing.

Rather than see Mexico’s natural resources sold off, early last year AMLO called for a public consultation on whether the reform should be repealed.

Since then, AMLO has admittedly sent mixed signals.

In a recent interview with El Financiero, AMLO’s pick for secretary of finance, Carlos Urzua, said a MORENA government will neither repeal the reform nor kill existing oil privatisation deals. “They will be completely respected,” Urzua said.

It is comments like these from AMLO allies that have made it difficult for much of Mexico’s left to believe his oft-fiery anti-neoliberal rhetoric is genuine.

After all, they have been here before: AMLO has his political roots in the Party of the Democratic Revolution (PRD). Once considered the go-to major party for Mexican leftists, today the now struggling PRD is largely dismissed by progressives as a disappointment.

In the upcoming general elections, the PRD is widely expected to get less than 15% of the vote.

The only other alternative for Mexico’s left is indigenous candidate Maria de Jesus Patricio Martinez Marichuy. Supported by the National Indigenous Congress and the radical leftist Zapatista movement, Marichuy has called for a revolution that prioritises women’s rights and dignity for indigenous communities.

“We must be able to transform that rage in an organised way to go on the offensive to dismantle the power from above, building with determination and without fear, the power from below,” she said, while surrounded by Zapatista militants wearing their iconic balaclavas.

Although Marichuy has brought renewed public attention to the indigenous movement, she is unlikely to appear on the ballot during the general elections.

To qualify, her campaign needs to collect 860,000 signatures from across 17 of Mexico’s 33 states. With a March 30 deadline rapidly approaching, she has nowhere near the number of signatures needed.

In part, this could be put down to a lack of resources for her grassroots campaign, which is largely comprised of just a few thousand indigenous activists and other volunteers. The campaign itself appears to simply lack the money and extensive organisational infrastructure that established parties not only have, but need to compete on a national level in a country of 127.5 million people.

On top of this, Marichuy’s campaign has complained of conditions set down by electoral authorities for the signature collection drive. Activists say the conditions are unfair and dysfunctional, such as the mandatory use of specific types of smart phones to collect signatures, not to mention clunky official software provided by electoral authorities.

Marichuy said that in rural indigenous communities, spotty internet access made signature collection almost impossible, and that it often took her campaign as much as 16 hours to collect, process and upload a single signature.

Ultimately, activists from her campaign have complained the system is designed for large, well-funded establishment parties, while making it almost impossible for outsider candidates to qualify.

Nonetheless, many familiar faces of Mexico’s political establishment are likewise struggling. While the PRD could be heading for a historic wipe-out, the right-wing PAN and the Institutional Revolutionary Party (PRI) are facing their own long-term crises.

Once considered almost synonymous with the Mexican state, the PRI’s expected presidential candidate, Jose Antonio Meade, is trailing AMLO in third place, according to a recent poll published by El Universal.

Meade has held numerous ministerial positions over the years, but for average voters he was a relative unknown until recently – at least when compared with household names like AMLO.

So far, his campaign’s biggest claim to fame has been a controversy around allegations that 94% of its official Twitter account’s followers were bots.

PAN candidate Anaya is in better standing, despite being the party’s second choice. Their original candidate, former first lady Margarita Zavala, announced she would run as an independent back in October.

Most Mexican pundits agree Anaya’s best chance is his newly minted coalition with the PRD. The PAN-led Mexico to the Front coalition includes the PRD and another minor party, and has the raw numbers to potentially defeat AMLO.

However, it is unclear if both PAN and PRD voters will ultimately buy into the unstable alliance on election day. The PRI also has its own coalition with two minor parties, but faces a much tougher uphill fight.

To muddy the waters even further, it is worth noting there is no guarantee that the most popular candidate will win. Mexico’s epidemic of vote buying is an open secret, and it is rare to encounter a Mexican voter who genuinely has faith in the system.

Fewer than 64% of registered voters bothered to cast a ballot in the 2012 general election. Abstention will again likely play a key role in the outcome of this vote.

To make matters worse, there is already speculation this year’s vote could be Mexico’s dirtiest election in recent memory.

“We have no reason to be optimistic,” political scientist Jesus Cantu told Bloomberg, warning a close vote in particular could quickly become mired in political violence, not to mention Mexico’s other trademark election day curiosities.

“This could be the worst election since democratic races were born,” he said.

On the streets of Mexico City, the feeling of political disenfranchisement among ordinary people is already palpable; yet it only gets worse the further one travels from the capital.

The simmering pessimism has blended with the Trump-induced sense of national humiliation, creating a cocktail of cynical frustration that can be hard to shrug off.

The offhand remark, “they’re all the same”, has become something of a national mantra. Like abstention, this mantra will be among all the candidates’ worst enemies – AMLO included.