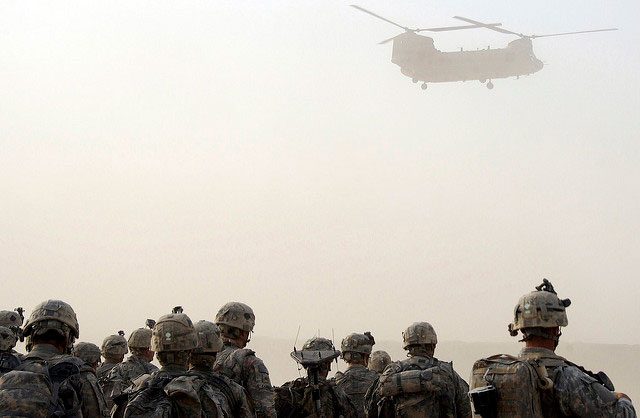 Truthout – President Donald Trump is hesitating to agree to thousands of additional troops for the war in Afghanistan as recommended by his secretary of defense and national security adviser, according to a New York Times report over the weekend.

So, it’s a good time to put aside, for a moment, the troop request itself and focus on why the United States has been fighting the Taliban since 2001 — and losing to them for well over a decade.

Some of the war managers would argue that the United States has never had enough troops or left them in Afghanistan long enough. But those very figures are openly calling for an indefinite neocolonial US military presence. The real reason for the fundamental weakness of the US-NATO war is the fact that the United States has empowered a rogues’ gallery of Afghan warlords whose militias have imposed a regime of chaos, violence and oppression on the Afghan population — stealing, killing and raping with utter impunity. And that strategy has come back to bite the Pentagon’s war managers.

The Taliban hold the same sexist ideas as many members of rural Afghan society about keeping girls out of schools and in the home. But the organization appeared in 1994 in response to the desperate pleas of the population in the south — especially in a Kandahar province divided up by four warlords — to stop the wholesale abduction and rape of women and pre-teen boys, as well as the uncontrolled extortion of tolls by warlord troops. The Taliban portrayed themselves as standing for order and elementary justice against chaos and sexual violence, and they immediately won broad popular support to drive the warlords out of power across the south, finally taking over Kabul without a fight.

Then in 2001 the United States ousted the Taliban regime — implicitly as retribution for 9/11, even though the Taliban leader Mullah Omar had not been informed of Osama bin Laden’s plot and had strongly opposed any such plotting. Instead of forcing the warlords to give up their power or simply letting Afghan society determine the Taliban’s fate, the United States helped its own warlord allies consolidate their power. President Hamid Karzai was encouraged to appoint the most powerful warlords as provincial governors and their private militias were converted into the national police. The CIA even put some of the militias on their payroll along with their warlord bosses to help track down Taliban and al Qaeda remnants.

These early US decisions created the plague of abuses by the “police” and other militias that has remained the underlying socio-political dynamic of the war ever since. Ron Neumann, US ambassador to Afghanistan from 2005 to 2007, explained the accepted rules for the warlords and the commanders of their militias toward those who are not part of their tribal in-group. “You take the people’s land, their women — you steal from them — it’s all part of one package,” he told me in a 2009 interview.

It was not long before the Taliban began to reorganize for a second resistance to the warlords. From 2003 to 2006, they were taking the offensive across the Pashtun area of the south, with a rapidly increasing tempo of attacks.

In 2006 the US-NATO command responded to the Taliban offensive by creating the “Afghan National Auxiliary Police” (ANAP). ANAP officers were given new AK-47 assault rifles and uniforms like those of regular police, but the group was in essence another warlord militia, composed of the same individuals as other warlord militias. As a senior official in the Afghan Ministry of Interior told Human Rights Watch, the ANAP “was made for the warlords.” They were “the same people, committing the same crimes, with more power.”

The ANAP program was abandoned in April 2008, an apparent failure, but the US-NATO reliance on the warlords’ militias continued. When US and British troops moved back into Lashkar Gah district of Helmand Province in mid-2009, their plan was to rely on police to reestablish a government presence there. But the police, commanded by mujahideen loyal to province warlord Sher Mohammed Akhunzadeh, had terrorized the population of the district with systematic violent abuses, including the frequent  abduction and rape of pre-teen boys. The residents and village elders warned the British and Americans stationed in the district that they would again support the Taliban if necessary to protect themselves against being victimized by the police.

By September 2009 as the US commander in Afghanistan, Gen. Stanley A. McChrystal was pressing Obama to add 40,000 more troops, his command was no longer under any illusions about being able to regain the support of the rural Pashtun population as long as it was so closely associated with the warlords. In his initial assessment of August 2009, McChrystal referred to “public anger and alienation” toward the US and NATO troops, because of the general perception that they were “complicit” in “widespread corruption and abuse of power.”

But by then McChrystal and the US-NATO command chose to continue to rely on their warlord clients, because the US military needed their militias to supply all the US and NATO troops in the country. In order to get food, fuel and arms to the foreign troops at over 200 forward-operating military bases and combat outposts, the command had to outsource the trucking of the supplies and the security to private companies. Otherwise the command would have had to use a large percentage of the total foreign troops in Afghanistan to provide security for the convoys, as the Russians had done in Afghanistan in the 1980s.

But the only plentiful and instantly available supply of armed forces to provide the security was in the ranks of the warlords’ own militias. So, the Pentagon designed a massive $2.16 billion annual logistics contract in 2008-09 under which about 25,000 militiamen were paid by dozens of private trucking companies and security companies owned by the warlords. The warlords were paid tens of millions of dollars a year, further consolidating their hold on the society.

The abuses by militias continued to be the primary complaint of village residents. The district governor in Khanabad district of Kunduz province told Human Rights Watch, “People come to me and complain about these arbakis [militias], but I can do nothing about this. They collect ushr [informal tax], take the daughters of the people, they do things against the wives of the people, they take their horses, sheep, anything.“

When he assumed command in Afghanistan in mid-2010, Gen. David Petraeus immediately decided to turn yet again to the same warlord source of manpower to create the “Afghan Local Police” or ALP to provide 20,000 men to patrol the villages. Each ALP unit had its own Special Forces team, which gave its officers even greater impunity. The chief of the Baghlan Province council recounted a meeting with the US Special Operations Forces officer in charge of the ALP at which he had warned that the militiamen were “criminals.” But the officer had flatly rejected his charge.

In theory, the ALP was supposed to be accountable to the chief of police in each district where it was operating. But one district chief of police in Baghlan province complained that it was impossible to investigate ALP crimes because the US Special Operations Forces were protecting them.

A Green Beret officer interviewed by the Christian Science Monitor in 2011 explained the US Special Operations Forces’ perspective on the depredations of its Afghan clients:  “The ugly reality,” he said, “is that if the US wants to prevail against the Taliban and its allies, it must work with Afghan fighters whose behavior insults Western sensibilities.”

By 2013 the ALP had grown to nearly 30,000, and even the State Department annual report on human rights in Afghanistan acknowledged the serious abuses blamed on the ALP. The 2016 State Department report on human rights in Afghanistan refers to “credible accounts of killing, rape, assault, the forcible levy of informal taxes, and the traditional practice of ‘baad’ — the transfer of a girl or woman to another family to settle a debt or grievance” — all attributed by villagers to the ALP.

The linkage between warlord militia abuses and the cooperation of much of the rural population with the Taliban has long been accepted by the US command in Afghanistan. But the war has continued, because it serves powerful interests that have nothing to do with Afghanistan itself: the careers of the US officers who serve there; the bureaucratic stakes of the Joint Special Operations Command and the CIA in their huge programs and facilities in the country; the political cost of admitting that it was a futile effort from the start. Plus, the Pentagon and the CIA are determined to hold on to Afghan airstrips they use to carry out drone war in Pakistan for as long as possible.

Thus Afghanistan, the first of the United States’ permanent wars, is in many ways the model for all the others that have followed — wars that have no other purpose than to serve the US war system itself.

Gareth Porter is an independent investigative journalist and historian writing on US national security policy. His latest book, Manufactured Crisis: The Untold Story of the Iran Nuclear Scare, was published in February of 2014. Follow him on Twitter: @GarethPorter.

Cover photo: US Army paratroopers watch as a CH-47 Chinook helicopter descends to pick them up for an air-assault mission July 17, 2009, during a dust storm at Forward Operating Base Kushamond, Afghanistan. Many careers, reputations and programs tied to the war industry depend upon the continuation of the failed Afghan war. (Photo: Pfc. Andrya Hill / US Army)