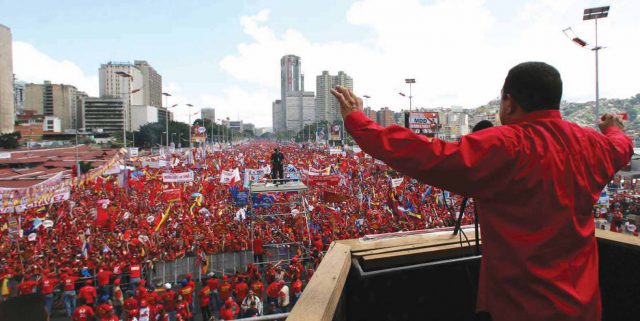 It’s difficult to know where to begin in responding to the article “In Venezuela, we couldn’t stop Chávez. Don’t make the same mistakes we did,” by Andrés Miguel Rondón, recently published by the Washington Post.

In the piece, Rondón recycles the by-now worn out cliché of “Donald Trump = Hugo Chávez” that has circulated in international media over the past six months, claiming to present readers with “lessons” from Chavista Venezuela for resistance in the Trump era.

Sadly readers interested in gleaning organizing tips for combatting Trump will be disappointed, given that Rondón is spectacularly wrong on just about everything in the article.

Rondón begins by equating his situation with that of the mass of the US population – muslims, LGBTQ, workers, Blacks, women, Latin@, and other immigrant communities – who are currently on the receiving end of Trump’s right-wing onslaught.

“I grew up as the “you” Trump is about to turn you into,” he tells us forebodingly and without the slightest hint of irony.

Has Rondón actually suffered proto-fascist persecution in Chávez’s Venezuela? Has he really spent his entire life having his sex organs policed, surviving at the mercy of law enforcement officials, or fearing that knock on the door at any moment which could be a less than friendly immigration official?

Or does he have more in common with the elite student protesters he describes, unjustly derided by Chávez as “pups of empire,” simply for receiving hundreds of thousands of dollars from US institutions such as the Milton Friedman Foundation?

According to his LinkedIn profile, Rondón is a Madrid-based junior banker hailing from an upper middle class Venezuelan family, educated in elite private educational institutions his entire life. Fittingly, he even did an internship with the transnational food conglomerate Polar, owned by Venezuelan billionaire Lorenzo Mendoza, who happens to be the cousin of ultra-right Venezuelan opposition leader Leopoldo López.

It’s therefore unsurprising that Rondón’s entire piece reads like one long eulogy to the bygone days when Venezuela “respected the experts, the people who know how to do business”. His mourning reflects the collective trauma of an entire generation of would-be technocratic elites – including most emblematically Leopoldo López, Henrique Capriles, and María Corina Machado – whose presumed “right” to rule Venezuela was unceremoniously denied by Hugo Chávez and the Bolivarian Revolution.

Coming to power in 1999, Chavismo promised to transform the country’s less than democratic system, redistribute its oil wealth to the poor, and most importantly, to include the country’s mostly Black and Brown majority in politics for the first time. On the bulk of these pledges, Chavismo has kept its word.

In contrast to the glaring misogyny at the core of Trumpism, the Bolivarian Revolution has provided financial support for poor single-moms to attend college, and is responsible for one of the most progressive constitutions in the world, which recognises domestic labour and child raising as legitimate remunerated work. Far removed from the Trump’s White supremacy, the Chavista government has sought to empower Afro-Venezuelan and indigenous communities, passing anti-racial discrimination laws, forging links to African and Caribbean nations, recognizing indigenous land rights, and setting up new government agencies aimed at addressing centuries long structural inequalities affecting these populations.

It is precisely the empowerment of this demographic majority at the expense of the country’s White, Western-educated elite that renders Chavismo and Trumpism quite literally worlds apart, as Rondón himself recognizes in a brief flicker of veracity: “One owned skyscrapers, another expropriated them.”

And while it is true that Chavismo and Trumpism share some minor discursive and stylistic similarities – both are indeed populisms that by very definition call into being that collective and quasi-mythical political actor known as the “people” in confrontation with the “establishment” – all possible analogies start and end here. Quite simply, content cannot be reduced to form.

For Chavismo, the “people” or pueblo is fundamentally inclusive, encompassing not just the racialized poor, but also new professionals as well as more traditional working and lower middle class strata who stand united against an oligarchy that has for a century treated Venezuela’s oil wealth as its private ATM. It is, in Argentine-Mexican philosopher Enrique Dussel’s terms, the “social bloc of the oppressed”.

In contrast, the Trumpian “people” is minoritarian, limiting itself largely to middle and upper-middle class Whites. These nearly 62 million people – roughly a quarter of the US voting population – were driven by reactionary fears of downward mobility that were successfully channeled against a racialized Black and immigrant other as well as a global (Jewish) financial elite.

Unsurprisingly, Rondón’s inability to distinguish between Chavismo and Trumpism somewhat affects the quality of his advice on how to mount effective resistance against the new administration’s far-right policies.

Rondon’s tips include such revolutionary gems as “don’t feed polarization: disarm it,” “don’t try and force him out,” and what is for all intents and purposes “try not to think of poor people as stupid, and if you can’t help it, then don’t let them know it”. Even tame protests against Trump’s new administration, for instance the cast of Hamilton’s message to VP Mike Pence, are criticised by Rondon as “antagonizing” Trump. That is, the best way to fight Trump is not to upset the status quo.

If you think that you’ve witnessed this political strategy in action before, then you’d be right.

Yes, Rondón’s recipe reads just like a page out of the Democratic Party’s playbook, which incidentally brought about Hillary Clinton’s catastrophic defeat at the hands of literally the most disliked US presidential candidate in thirty years. Indeed, Rondón exemplifies Clintonism’s stale status quo centrism that rejects combative class politics in favor of elite consensus among “[preferably multicultural, female, and non-heteronormative] experts who work hard and know how to do business”.

Once again, Rondón fetichizes form, ignoring the vital question of political content. A politics that asks students how they feel about their student debt in “three emojis or less” instead of actually fighting to improve conditions for a cross-racial working class is doomed to failure, no matter how diverse its standard bearers or how “woke” its discourse.

This discredited approach contrasts sharply with that of Bernie Sanders, who waged a grassroots campaign against what he termed the “billionaire class” on a platform of universal healthcare, free college education, and a living wage.

In fact, a number of polls have suggested that Sanders’ left-wing populism – the product of years of social movement organizing from Occupy Wall Street to Black Lives Matter – may very well have trounced Donald Trump and his xenophobic channeling of social grievances.

Indeed, one can plausibly argue that the Sandersistas’ anti-neoliberal politics echoes the leftist populism of Latin America’s “pink tide”, of which Chavismo is the most emblematic expression.

There is, however, much inspiration to be drawn from the impressive array of social movements that have emerged from and built Chavez’s Venezuela. Important lessons on maintaining unity, the significance of using creativity and culture in struggle, and constructing alternative forms of popular pedagogy – all of which would require a separate article to explore fully. Perhaps the most important of them all is that only left-wing populism’s “social bloc of the oppressed” – and not pro-Wall Street faux progressivism – is capable of defeating Trumpism. In the spirit of Fred Hampton, you don’t fight fascism with neoliberal capitalism; only socialism can triumph.