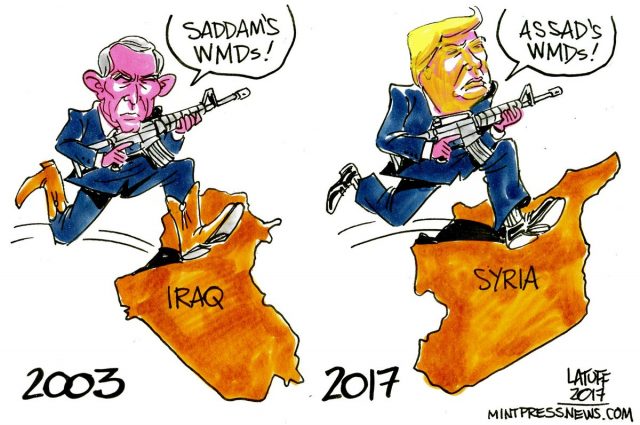 US makes new claims of WMD in Syria

It’s WMD all over again.

Anonymous “US officials” are once again accusing a targeted “regime” of using “chemical weapons” and threatening that the U.S. military may have to “hold it accountable”. Once again, western media is broadcasting these accusations and threats without skepticism or investigation.

The Washington Post story is titled “Trump administration: Syria probably continuing to make, use chemical weapons”. Jane’s Defence Weekly quotes a U.S. offical saying “They clearly think they can get away with this ….”

Jerusalem Online says “A US official says Syrian President Assad’s forces may be developing new types of chemical weapons, which which could reach as far as the US..”

The Reuters story in the New York Times says “US officials have said the Syrian government may be developing new types of chemical weapons, and President Donald Trump is prepared to consider further military action…. President Bashar al Assad is believed to have secretly kept part of Syria’s chemical weapons stockpile….”

The Washingon Post article concludes with the threat, “If the international community does not take action now . . . we will see more chemical weapons use, not just by Syria but by non-state actors such as ISIS and beyond,” the first official said. “And that use will spread to U.S. shores.”

Based on a review of facts from recent history, it is very likely the story is false and is being broadcast to deceive the public in preparation for new military aggression. Anyone who thinks that politicians don’t consider timing and marketing needs to only recall the statement of a GW Bush official that “from a marketing point of view, you don’t introduce new products in August.” The “product” was the PR campaign to get the American public to accept the invasion of Iraq.

When is there going to be some accountability for the US military industrial complex and their political and media enablers and promoters?

The invasion of Vietnam with over 500 thousand US soldiers was preceded by the phoney Gulf of Tonknin incident where a US ship was supposedly attacked by a North Vietnamese vessel. It was untrue and President Johnson knew it. The resolution was passed unanimously (416-0) in the House and only Wayne Morse and Ernest Gruening had the integrity and insight to oppose it in the Senate. Was anyone ever held accountable for the lie that led to 55 thousand dead US soldiers and millions of dead Vietnamese? No.

The 1991 attack on Iraq and subsequent massacre of Iraqi soldiers and civilians was preceded by the fabricated testimony of the Kuwaiti Ambassador’s daughter pretending to be a nurse who had witnessed Iraqi soldiers stealing incubators and leaving Kuwaiti babies on the floor. Were the marketing officials Hill & Knowlton and politicians such as Tom Lantos who managed this deceit ever held accountable? No.

In 2003 the US launched the invasion of Iraq leading to the death of over a million Iraqis based on the false and fabricated evidence provided by the CIA and uncritically promoted by the mainstream media. For example, Michael Gordon and Thomas Friedman promoted and lauded the invasion at the NYTimes. Were they held to account? No, they carry right on to today.

In 2011 the US led NATO attacks on Libya with the stated purpose to “protect civilians” from massacre. This was explained and encouraged by journalists and pundits such as Nicholas Kristof and Juan Cole. NATO officials bragged about their operation. After the brief western euphoria, it became clear that the campaign was based on lies and the real result was an explosion of extremism, massacres and and chaos which continues to today. Accountability? None. One rarely hears about Libya today. Out of sight, out of mind.

In August of 2013 we heard about a massive sarin gas attack on the outskirts of Damascus. Human Rights Watch and others promoting a western attack quickly accused the Syrian government. They asserted that Assad had crossed Obama’s “red line” and the US needed to intervene directly. Subsequent investigations revealed the gas attack was not carried out by the Syrian government. It was perpetrated by a Turkish supported terrorist faction with the goal of pressuring the Obama administration to directly attack Syria. Two Turkish parliamentarians presented evidence of Turkey’s involvement in the transfer of sarin. Some of the best and most time-proven US investigative journalists, including Robert Parry and Seymour Hersh, researched and discovered the evidence points to Turkish supported “rebels” not Syria. Despite the factual evidence exposing the “junk heap” of false claims, mainstream media and their followers continue to assert that Assad committed the crime.

In April 2017 it was the same thing: US and allies made accusations which were never proven and ultimately discredited. The UN / OPCW investigation team never visited the scene of the crime. They discovered the curious fact that dozens of victims in multiple locations showed up at hospitals with symptoms of chemical injuries before the attack happened. This is strong evidence of fraud but that investigation was not pursued. With or without awareness of the deceit, Trump ordered missile strikes on a Syrian air base which killed 13 people including four children. Accountability? None.

Recently it has become clear that dark forces in the US government ad military do not intend to stop their efforts to destroy Syria. Despite confusion and contradictory claims in the US administration, a core fact is that the US is training and supplying a sectarian military militia inside northern Syria against the wishes of the Syrian government. The US said they were in Syria to get rid of ISIS but now that ISIS is largely gone, the US military says it is not leaving. On the contrary, the US military helped escort ISIS fighters from Raqqa to al Bukamal and the US is now training ISIS fighters to be reincarnated as yet another anti-Assad “rebel” force.

As always, US aggression needs some measure of political support. To gain that, they need a justification. Thus it’s WMD all over again. Once again. the “bad guys” are using chemical weapons on their own people. Supposedly the Syrian government is incredibly stupid …. they just keep on using chemical weapons and giving the US a justification to act as judge, jury and executioner.

Most of the American public is too busy, distracted or overwhelmed with problems to investigate U.S. government claims. Mainstream media, including some alternative media, are failing badly. They are supposed to be holding government to account, critically questioning the assertions, investigating the facts, exposing contradictions and falsehoods. Along with the politicians and government, they have some responsibility for the ongoing wars and aggression. They all should be accountable. When is that going to happen?

Rick Sterling is an investigative journalist based in the San Francisco Bay Area. He can be reached at [email protected]