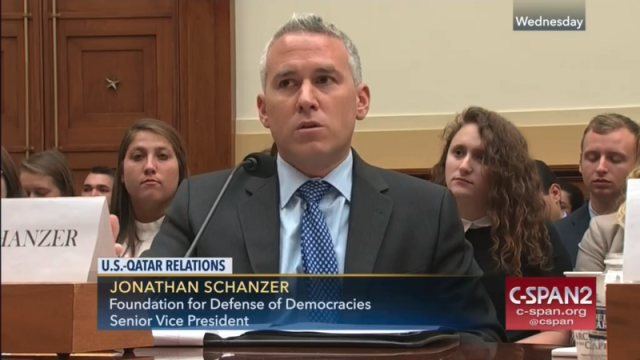 The leading neoconservative think tank Foundation for Defense of Democracies is functioning as an agent of the Israeli government, Al Jazeera’s forthcoming investigation on the US Israel lobby will reveal.

According to a source who has seen the undercover documentary, it contains footage of a powerful Israeli official claiming that “We have FDD. We have others working on this.”

Sima Vaknin-Gil, a former Israeli military intelligence officer, is said to state that the foundation is “working on” projects for Israel including “data gathering, information analysis, working on activist organizations, money trail. This is something that only a country, with its resources, can do the best.”

Under the Foreign Agents Registration Act, commonly known as FARA, US organizations and individuals who work on behalf of foreign governments are required to register with the counterintelligence section of the Department of Justice.

A search on the FARA website shows that the Foundation for Defense of Democracies is not registered.

Al Jazeera’s film reportedly identifies a number of lobby groups as working with Israel to spy on American citizens using sophisticated data gathering techniques. The documentary is also said to cast light on covert efforts to smear and intimidate Americans seen as too critical of Israel.

Israel lobby groups have placed intense pressure on Qatar, which funds Al Jazeera, to shelve the film, fueling speculation it may never be aired.

Sima Vaknin-Gil, who holds the rank of brigadier-general in Israel’s military, is now the top civil servant at Israel’s Ministry of Strategic Affairs.

The ministry is in charge of running a covert campaign of sabotage against BDS, the boycott, divestment and sanctions movement in support of Palestinian human rights.

Soon after she was appointed to lead the ministry at the start of 2016, Vaknin-Gil promised to “create a community of fighters” who would “flood the internet” with Israeli propaganda that would be publicly distanced from the government.

As well as getting funding from Sheldon Adelson, the anti-Palestinian billionaire and number one donor to Donald Trump’s presidential campaign, the Foundation for Defense of Democracies has close ties to the United Arab Emirates.

In hacked emails last year the Emirati ambassador in Washington encouraged the foundation to push for moving a US military base from Qatar to his own country.

The film will also reportedly show undercover footage of a junior Israel lobbyist boasting of how close Israel’s ties are with the United Arab Emirates and other Gulf regimes. 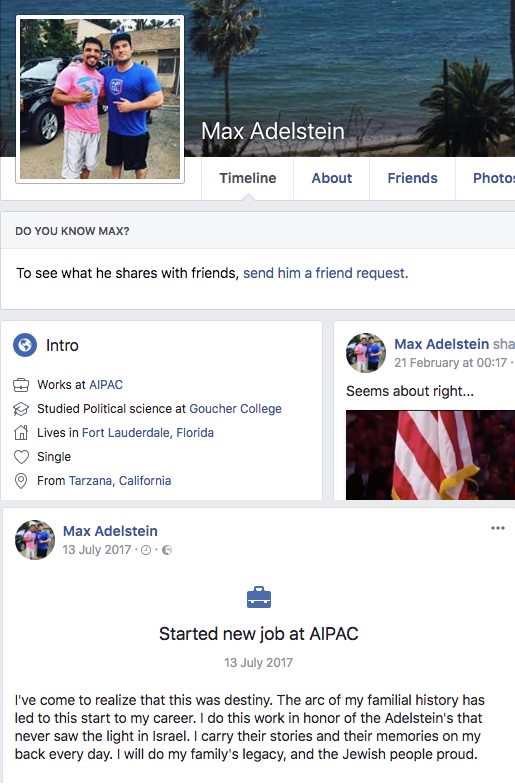 Max Adelstein is said to be seen in the film stating that the lobby has helped Israel and the United Arab Emirates develop security links “all under the table.”

Adelstein was an intern at Washington lobbying firm the Harbour Group. The firm’s clients include the United Arab Emirates and Saudi Arabia.

Adelstein now says he works for AIPAC, Washington’s most powerful Israel lobby group whose annual conference began Sunday. (Shortly after this article was published, Adelstein switched on his Facebook privacy settings and removed mention of his AIPAC role. Screenshots of his profile have been added.)

The film is said to show Adelstein boasting that ties between the United Arab Emirates and Israel are “getting so much better, and nobody knows it.”

He told an undercover Al Jazeera reporter that “The governments have to coordinate on security. It’s all under the table. But on trade, security, tech, medicine, there’s a lot of cooperation.”

According to The Electronic Intifada’s source, Adelstein is seen in the undercover footage explaining that an American Jewish Committee “study tour” of the United Arab Emirates focusing on “mutual cooperation” was planned.

In January, the Conference of Presidents of Major American Jewish Organizations, a forum of Israel lobby groups whose membership includes the American Jewish Committee, announced it had sent a “large delegation” of leaders to the United Arab Emirates, where it “met with everybody at the highest levels.”

The additional insight into the United Arab Emirates’ cozying up to Israel lobby groups comes as the wealthy monarchy’s activities in Washington are facing renewed scrutiny. 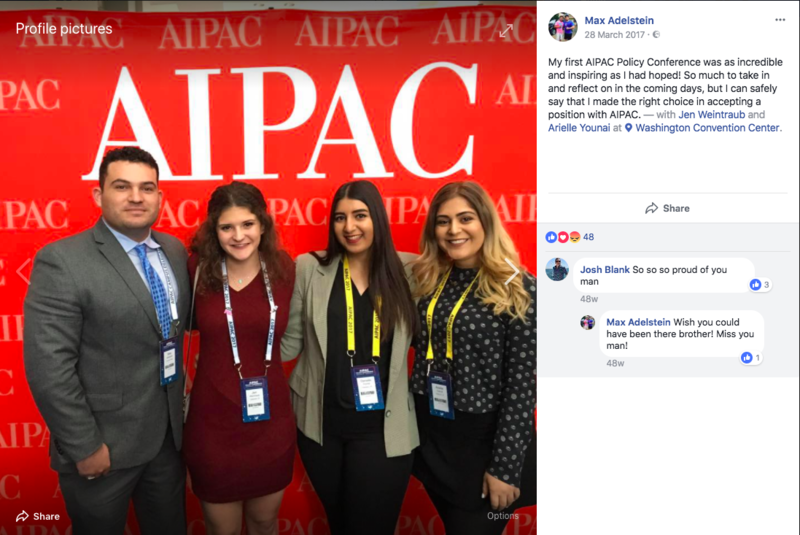 A photo from AIPAC staffer Max Adelstein’s Facebook profile, which has now been made private.

On Saturday, The New York Times reported that special counsel Robert Mueller is expanding his investigation from alleged Russian meddling in the US presidential election to “include Emirati influence on the Trump administration” through the president’s son-in-law and adviser Jared Kushner.

Jonathan Schanzer, senior vice president of the Foundation for Defense of Democracies, is said to be seen in the undercover footage briefing recruits on how to smear Palestine solidarity groups in the US who support the BDS movement.

According to the source, Schanzer admits to the undercover reporter that “BDS has taken everybody by surprise.”

According to the source, Schanzer laments that attempts to smear Students for Justice in Palestine and American Muslims for Palestine as linked to extremist Islamic terrorism have failed to gain traction.

He is also said to regret that the Israel lobby’s habitual tactic of falsely alleging Palestine solidarity activists are motivated by anti-Jewish hatred is losing its impact.

“Personally I think anti-Semitism as a smear is not what it used to be,” he is said to tell the undercover reporter.

Schanzer’s views echo a secret report endorsed by the Israeli government and distributed to Israel lobby leaders last year. That report, a leaked copy of which was published by The Electronic Intifada, concludes that Israel’s efforts to stem the growth of the Palestine solidarity movement have largely failed.

In October last year, Clayton Swisher, Al Jazeera’s head of investigations, first announced that the Qatari satellite channel had in 2016 run an undercover journalist in the US Israel lobby.

Swisher made the announcement soon after the UK’s broadcast regulator dismissed all complaints against Al Jazeera’s film The Lobby.

That documentary, broadcast in January 2017, exposed Israel’s covert influence campaign in the UK’s ruling Conservative and opposition Labour parties. The film revealed an Israeli embassy agent plotting with a British civil servant to “take down” a government minister seen as too critical of Israel.

Although Swisher promised the US film would come out “very soon,” nearly five months later it has yet to be broadcast.

Over the same period, a wave of Israel lobbyists has visited Qatar at the invitation of its ruler, Emir Tamim bin Hamad Al Thani.

Among them have been some of the most rightwing and extreme figures among Israel’s defenders in the US, includingHarvard law professor Alan Dershowitz and Morton Klein, the head of the Zionist Organization of America.

Multiple Israel lobby sources told Israel’s Haaretz newspaper last month that they had received assurances from Qatari leaders late last year that the Al Jazeera documentary will not be aired.

Qatar has denied this.

Pro-Israel groups have gone on the offensive to try and deter Al Jazeera from showing the film.

“Let’s not mince words about what this was – a well-funded, professional espionage operation carried out by Qatar on American soil,” Noah Pollak, executive director of the neoconservative Committee for Israel, has stated.

Ironically, pro-Israel members of Congress are now pressuring the Department of Justice to force Al Jazeera to register as an arm of Qatar, under the Foreign Agents Registration Act, just as the Russian-funded network RT was recently forced to do.

Whether this pressure will succeed in burying the documentary for good is perhaps the ultimate test of the Israel lobby influence Al Jazeera journalists sought to expose.

Asa Winstanley is an investigative journalist and associate editor with The Electronic Intifada.