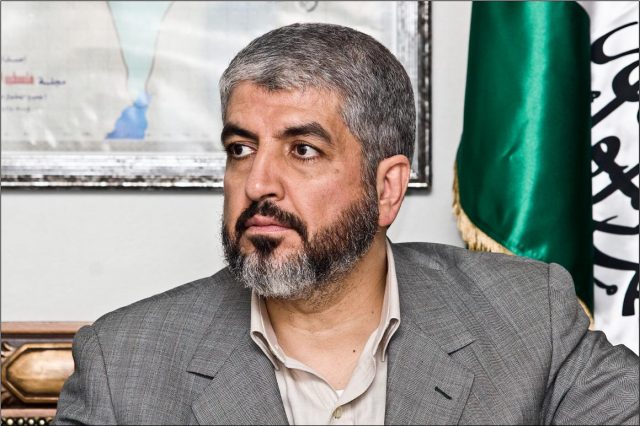 Leaders of Hamas released a document outlining their guiding principles at a press conference in the Qatari capital Doha on Monday.

Much coverage focused on the document’s acceptance of the 1967 boundary as the basis for establishing a Palestinian state alongside Israel. The document also includes pronouncements on how Hamas views the roots of the conflict, the role of resistance and its position towards Jews.

It aims to reposition Hamas as part of a Palestinian national consensus and as an interlocutor which can eventually be part of an internationally brokered political resolution.

The document attempts to do this while not compromising basic principles, an exercise that leads to some apparent contradictions.

Hamas also aims to assert its independence from the Muslim Brotherhood, the Islamist movement founded almost a century ago in Egypt and which is viewed as an enemy by several regional regimes.

With an eye to international opinion, Hamas released its “Document of General Principles and Policies” in official Arabic and English versions.

Hamas leader Khaled Meshaal said the new document had been two years in the making, but it is really the culmination of internal debates that go back more than a decade.

Jews are not the enemy

Hamas leaders have long recognized that the group’s founding charter, written by one man in 1988, served as an impediment to political outreach within and beyond Palestine.

Few would dispute that the worst aspect of the original charter was its unabashedly anti-Jewish language. Borrowing from classic European anti-Semitism, it even cites as a reference the Tsarist anti-Semitic hoax The Protocols of the Elders of Zion.

Even if this long ago ceased to reflect Hamas leaders’ thinking, these odious statements served as reliable weapons in Israel’s anti-Palestinian propaganda arsenal.

This brings Hamas into line with the historic position of the Palestinian national movement. As Palestine Liberation Organization chairman Yasser Arafat stated in his 1974 speech to the United Nations, “We do distinguish between Judaism and Zionism. While we maintain our opposition to the colonialist Zionist movement, we respect the Jewish faith.”

Meshaal had already made a similar statement during his 2012 visit to the Gaza Strip. “We do not fight the Jews because they are Jews,” he said. “We fight the Zionist occupiers and aggressors. And we will fight anyone who tries to occupy our lands or attacks us.”

The original charter characterizes the problem in Palestine as rooted in Muslim-Jewish religious strife and describes the land of Palestine as an Islamic waqf, or endowment.

But in his 2007 book Hamas: A History from Within, scholar Azzam Tamimi writes that Hamas leaders already felt that they needed to move away from these concepts and seek more universal language.

Tamimi notes that under the influence of such thinkers as Abdelwahab Elmessiri, “the problem of Palestine is today seen by many Islamists, including leaders and members of Hamas, simply as the outcome of a colonial project” which could better be explained “in political, social or economic terms, than in terms of religion.”

The new document reflects this thinking: “The Palestinian cause in its essence is a cause of an occupied land and a displaced people.”

It also removes mention of Palestine as an Islamic waqf, affirming rather that “Palestine is a land whose status has been elevated by Islam” – just as it has been in other religions. Palestine is “the birthplace of Jesus Christ,” it states, and the resting place of prophets.

In the new document, Hamas states that the “establishment of ‘Israel’ is entirely illegal and contravenes the inalienable rights of the Palestinian people.” It affirms that there will be no recognition of the “usurping Zionist entity” or any concession on the right of return for refugees.

Yet in seeming contradiction, it states: “without compromising its rejection of the Zionist entity and without relinquishing any Palestinian rights, Hamas considers the establishment of a fully sovereign and independent Palestinian state, with Jerusalem as its capital along the lines of the 4th of June 1967, with the return of the refugees and the displaced to their homes from which they were expelled, to be a formula of national consensus.”

In other words, Hamas is formally signing up to the two-state solution at the very moment it is becoming clear that such an outcome will not come about.

Putting that aside, a good analogy for Hamas’ balancing act would be the Irish nationalist party Sinn Féin’s acceptance of the 1998 Belfast Agreement, which entailed entering a power-sharing government in Northern Ireland, while simultaneously continuing to reject partition.

In the wake of last year’s British vote to exit the European Union, Sinn Féin is reviving its campaign to abolish Northern Ireland and bring about a single state on the island of Ireland, an outcome the Belfast Agreement allows if a majority backs it in a referendum.

Something similar has been articulated by Hamas leaders for years. In a 2006 New York Times article, Hamas adviser Ahmed Yousef proposed a long-term truce, or hudna, citing the Irish peace process as a model for ending conflict without Palestinians abandoning their positions. A years-long “period of calm,” he argued, might create later the conditions for a durable political settlement that do not exist now.

In 2009, Meshaal told The New York Times that his party had “accepted a Palestinian state on the 1967 borders including East Jerusalem, dismantling settlements, and the right of return based on a long-term truce.”

The new document attempts a similar balancing act with respect to internal Palestinian politics. It states that the 1993 Oslo accords signed between the PLO and Israel “violate the inalienable rights of the Palestinian people” and it strongly condemns as “collaboration” the ongoing “security coordination” between Israeli forces and the PA.

But Hamas also accepts the PA as a reality, arguing that it should “serve the Palestinian people and safeguard their security, their rights and their national project.” Hamas also calls for rebuilding the PLO – of which it is not currently a member – on “democratic foundations.”

Since it won Palestinian legislative elections in 2006, Hamas has been subjected to discriminatory conditions by the so-called Quartet – the ad hoc grouping of EU, UN, US and Russian officials – who claim authority over the question of Palestine.

In order to be recognized as an interlocutor, Hamas is required to renounce violence, recognize Israel and accept all previous agreements.

Israel, meanwhile, is not required to recognize a Palestinian state or any Palestinian rights; Israel continues to use violence, not just with impunity but with weapons supplied by Quartet states; and Israel routinely tramples signed agreements and international law with its massive colonization of occupied Palestinian land.

But it also reserves “the right of our people to develop the means and mechanisms of resistance.”

Hamas adds: “Managing resistance, in terms of escalation or de-escalation, or in terms of diversifying the means and methods, is an integral part of the process of managing the conflict and should not be at the expense of the principle of resistance.”

In other words, Hamas sees armed resistance as something to be used or not used as circumstances dictate. If a political horizon opens up, it can turn away from armed resistance without conceding the right, just as other resistance and liberation movements have done.

Israel, unsurprisingly, dismissed Hamas’ new document before it had even been published, as a rebranding exercise designed to “fool the world.”

The reality, however, is that despite their differences, both major wings of the Palestinian national movement have expressed varying degrees of readiness for an accommodation with Israel.

It is Israel that stands adamantly against any political process or agreement that would place a limit on its voracious theft of Palestinian land.

More than providing anything new, the Hamas document confirms and enshrines long-term shifts in the movement’s thinking at a moment when it is about to undergo a political transition – Meshaal announced last September that he would soon be stepping down.

For all the significance that may have, it does not resolve the basic problem afflicting the institutionalized Palestinian national movement: neither Hamas, nor Fatah – its rival headed by PA leader Mahmoud Abbas – has a vision to mobilize and unite Palestinians in a struggle for their rights and land at a moment when the two-state solution has become irrelevant.