What does the Russian Revolution mean to you? 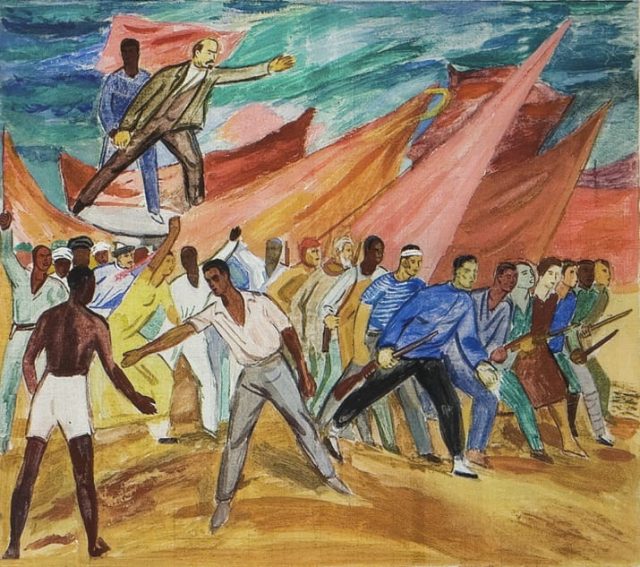 To mark the centenary of the October Revolution, Verso Books posed the question “What does the Russian Revolution mean to you?” to several authors. Below we show the testimonies of Domenico Losurdo and Boris Groys.

“Two epidemics swept the world in 1918.  One was Spanish influenza […] The other epidemic was Bolshevism, which for a time seemed almost as contagious and ultimately proved as lethal as the influenza” (Niall Ferguson, The War of the World, pp. 144-5).

As the authoritative British historian AJP Taylor observed, ‘some 50 million Africans and 250 million Indians were involved, without consultation, in a war of which they understood nothing’. They were simply rounded up by the London government and deported thousands of miles away, ultimately to be led into the ‘nightmarish corpse factory’ which was now working away in Europe at full speed. They were taken there as members of an ‘inferior’ race, which a ‘superior’ race could in good conscience sacrifice as cannon fodder (see War and Revolution. Rethinking the Twentieth Century, pp. 276-7, 309 and 168). And yet for Ferguson as for today’s dominant ideology, there is no doubt: colonial domination and the bloodbath of world war are synonymous with normality, or even with psychological good health, while the October Revolution – opposed to all this – represents epidemic, the spread of madness.

When did the revolutionary disease first strike? According to another of the liberal and capitalist West’s acclaimed court historians, Richard Pipes, Bolshevik October was but the conclusion of the ruinous historical cycle that began in Russia with the 1905 Revolution. Other exponents of historical revisionism go yet further; in the West the revolutionary virus and this epidemic had begun to flare up already in the mid-nineteenth century, with the publication of the Communist Manifesto, or even before that, with the spread of the Enlightenment philosophy that gave rise to the Jacobin revolution (prologue to the Bolshevik Revolution).

By this point, everything is clear: for the historical revisionists as for the dominant ideology, spiritual and mental health is equated with the stability of the ancien régime. Taken as a whole, this latter was characterised by a social and racial hierarchy, characterised in the colonies by the expropriation, deportation and decimation of the natives. This is the world the October Revolution had the great merit of sending into crisis. If Lenin’s appeal to the ‘colonial slaves’ to break their chains inspired and stimulated the world anti-colonial revolution, other slogans remain to be realised. Perhaps they ought to be rethought, in order to realise their full effectiveness.

The October Revolution was, uniquely, made in the name of internationalism and directed against all forms of nationalism. The revolution itself and the Civil War that followed were understood by the both sides as a war between The International and Russia – a war in which The International won. Even if Stalin later proclaimed the politics of Socialism in one country, this politics still interpreted the territory of the Soviet Union as a testing ground for the world revolution. Not accidentally every Soviet republic got a right to leave the Soviet Union without the consent of the central power and other republics. In this way the Soviet Union served as a prefiguration of the future worldwide association of the Soviet Socialist Republics.

This internationalist, universalist project remained unfulfilled. Contemporary world politics is dominated by a false opposition between capitalist, liberal globalisation profitable only for the financial elites, and autocratic nationalism that provokes ethnic and religious conflicts. In fact, contemporary nationalism is easily wedded to liberalism because both interpret global space as a stage for competition between individuals, ethnic groups and nations. The difference is only in the degree of harshness with which this competition is practiced.

Thus, what we need today is a return to the Communist project: international solidarity instead of global competition. It has become fashionable – inside and outside of Russia – to consider Soviet Socialism a failure. This is a grave historical mistake. The social experiment started by the October Revolution has shown that the economy based on collective property can work – and can work efficiently. It is the first historical demonstration of this kind but one can be sure that it will be repeated. A great part of mankind is seduced by the neo-liberal utopia: too many individuals believe that they are living start-ups. However, the reality will show itself at a certain point in time. Then the majority of the people will begin to understand that solidarity is a better way to success than competition of everybody against everybody. At that point the October Revolution will be not only remembered but also re-enacted.

Cover image: Soviet poster by the Brigade of Vkhutein, 1928