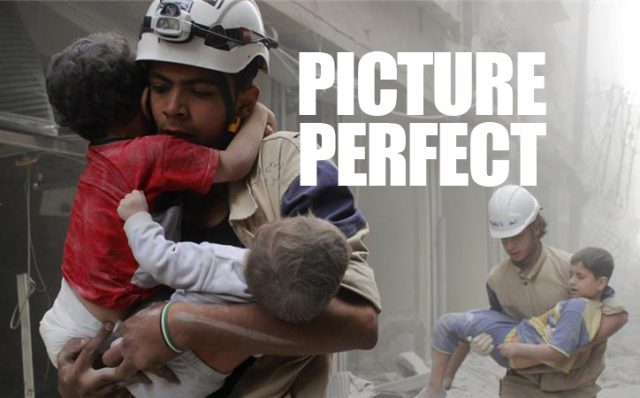 The October 16 issue of NY Review of Books has an article by Janine di Giovani titled “Why Assad and Russia Target the White Helmets”. The article exemplifies how western media promotes the White Helmets uncritically and attacks those who challenge the myth.

Giovani’s article attacks several journalists by name. She singles out Vanessa Beeley and echoes the Guardian’s characterization of Beeley as the “high priestess of Syria propaganda”. She does this without challenging a single article or claim by the journalist. She might have acknowledged that Vanessa Beeley has some familiarity with the Middle East; she is the daughter of one of the foremost British Arabists and diplomats including British Ambassador to Egypt. Giovanni might have explored Beeley’s research in Syria that revealed the White Helmets founder (British military contractor James LeMesurier) assigned the name Syria Civil Defence despite the fact there is a real Syrian organization by that name that has existed since the 1950’s. For the past several years, Beeley has done many on-the-ground reports and investigations in Syria. None of these are challenged by Giovanni. Just days ago Beeley published a report on her visit to the White Helmets headquarters in Deraa.

Giovanni similarly dismisses another alternative journalist, Eva Bartlett. Again, Giovanni ignores the fact that Bartlett has substantial Middle East experience including having lived in Gaza for years. Instead of objectively evaluating the journalistic work of these independent journalists, Giovanni smears their work as “disinformation”. Presumably that is because their work is published at alternative sites such as 21st Century Wire and Russian media such as RT and Sputnik. Beeley and Bartlett surely would have been happy to have their reports published at the New York Review of Books, Newsweek or other mainstream outlets. But it’s evident that such reporting is not welcome there. Even Seymour Hersh had to go abroad to have his investigations on Syria published.

Max Blumenthal is another journalist singled out by Giovanni. Blumenthal is the author of three books, including a NY Times bestseller and the highly acclaimed “Goliath: Life and Loathing in Greater Israel”. Giovanni describes his transition from “anti-Assad” to “pro-Assad” and suggests his change of perspective was due to Russian influence. She says, “Blumenthal went to Moscow on a junket to celebrate RT’s tenth anniversary. We don’t know what happened during that visit, but afterwards, Blumenthal’s views completely flipped.” Instead of examining the facts presented by Blumenthal in articles such as “Inside the Shadowy PR Firm that’s Lobyying for Regime Change in Syria”, Giovanni engages in fact-free McCarthyism. Blumenthal explained the transition in his thinking in a public interview. He also described the threats he experienced when he started to criticize the White Helmets and their public relations firm, but this is ignored by Giovanni.

Contrary to Giovanni’s assumptions, some western journalists and activists were exposing the White Helmets long before the story was publicized on Russian media. In spring 2015 the basic facts about the White Helmets including their origins, funding and role in the information war on Syria were exposed in my article “Seven Steps of Highly Effective Manipulators”. The article showed how the White Helmets were a key component in a campaign pushing for a “No Fly Zone” in Syria. It confirmed that the White Helmets is a political lobby force.

Giovanni ignores the investigations and conclusions of some of the most esteemed American journalists regarding the White Helmets and chemical weapons incidents in Syria.

The late Robert Parry published many articles exposing the White Helmets, for example The White Helmets Controversy and Syria War Propaganda at the Oscars. Parry wrote and published numerous investigations of the August 2013 chemical weapons attack and concluded the attacks were carried out by an opposition faction with the goal of pressuring the US to intervene militarily. Parry also challenged western conclusions regarding incidents such as April 4, 2017 at Khan Shaykhun. Giovanni breathlessly opens her article with this story while Parry revealed the impossibility of it being as described.

“Buried deep inside a new U.N. report is evidence that could exonerate the Syrian government in the April 4 sarin atrocity and make President Trump look like an Al Qaeda dupe.”

Legendary American journalist, Seymour Hersh, researched and refuted the assumptions of Giovanni and the media establishment regarding the August 2013 chemical weapons attacks near Damascus. Hersh’s investigation, titled The Red Line and Rat Line, provided evidence the atrocity was carried out by an armed opposition group with active support from Turkey. A Turkish member of parliament provided additional evidence. The fact that Hersh had to go across the Atlantic to have his investigation published suggests American not Russian disinformation and censorship.

In addition to ignoring the findings of widely esteemed journalists with proven track records, Giovanni plays loose with the truth. In her article she implies that a UN investigation blamed the Syrian government for the August 2013 attack. On the contrary, the head of the UN investigation team, Ake Sellstrom, said they did not determine who was responsible. “We do not have the evidence to say who did what ….The conflict in Syria is surrounded by a lot of rumors and a lot of propaganda, particularly when comes to the sensitive issue of chemical weapons.”

Giovanni says, “But the White Helmets’ financial backing is not the real reason why the pro-Assad camp is so bent on defaming them. Since 2015, the year the Russians began fighting in Syria, the White Helmets have been filming attacks on opposition-held areas with GoPro cameras affixed to their helmets.”

In reality, the ‘White Helmets” have a sophisticated media production and distribution operation. They have much more than GoPro cameras. In many of their movie segments one can see numerous people with video and still cameras. Sometimes the same incident will be shown with one segment with an Al Qaeda logo blending into the same scene with a White Helmets logo.

Giovanni claims “The Assad regime and the Russians are trying to neutralize the White Helmets because they   are potential witnesses to war crimes.” However the claims of White Helmet “witnesses” have little credibility. The White Helmet “volunteers” are paid three times as much as Syrian soldiers. They are trained, supplied and promoted by the same western states which have sought to regime change in Syria since 2011. An example of misleading and false claims by a White Helmets leader is exposed in Gareth Porter’s investigation titled “How a Syrian White Helmets Leader Played Western Media” . His conclusion could be directed to Giovanni and the NYReview of Books:

“The uncritical reliance on claims by the White Helmets without any effort to investigate their credibility is yet another telling example of journalistic malpractice by media outlets with a long record of skewing coverage of conflicts toward an interventionist narrative.”

When the militants (mostly Nusra / al Qaeda) were expelled from East Aleppo, civilians reported that the White Helmets were mostly concerned with saving their own and performing publicity stunts. For example the photo of the little boy in east Aleppo looking dazed and confused in the back of a brand new White Helmet ambulance was essentially a White Helmet media stunt eagerly promoted in the West. It was later revealed the boy was not injured, he was grabbed without his parent’s consent. Eva Bartlett interviewed and photographed the father and family for her story “Mintpress Meets the Father of Iconic Aleppo Boy and says Media Lied About his Son”.

The media and political impact of the White Helmets shows what money and marketing can do. An organization that was founded by a military contractor with funding from a western governments was awarded the Rights Livelihood Award. The organization was seriously considered to received the 2016 Nobel Peace Prize just three  years after its formation.

The Netflix infomercial “The White Helmets” is an example of the propaganda. The scripted propaganda piece, where the producers did not set foot in Syria, won the Oscar award for best short documentary. It’s clear that lots of money and professional marketing can fool a lot of people. At $30 million per year, the White Helmets budget for one year is more than a decade of funding for the real Syrian Civil Defence which covers all of Syria not just pockets controlled by armed insurgents.

Unsurprisingly, it has been announced that White Helmets will receive the 2019 “Elie Wiesel” award from the heavily politicized and pro-Israel Holocaust Memorial Museum in Washington. This, plus the recent “rescue” of White Helmets by the Israeli government, is more proof of the true colors of the White Helmets. Vanessa Beeley’s recent interview with a White Helmet leader in Deraa revealed that ISIS and Nusra terrorists were part of the group “rescued” through Israel.

Giovanni is outraged that some journalists have successfully challenged and put a big dent in the White Helmets  aura. She complains, “The damage the bloggers do is immense.”

Giovanni and western propagandists are upset because the myth is deflating. Increasing numbers of people – from a famous rock musician to a former UK Ambassador – see and acknowledge the reality.

As described in Blumenthal’s article, “How the White Helmets Tried to Recruit Roger Waters with Saudi Money”, rock legend Roger Waters says, “If we were to listen to the propaganda of the White Helmets and others, we would encourage our governments to start dropping bombs on people in Syria. This would be a mistake of monumental proportions…”

Peter Ford, the former UK Ambassador to Syria, sums it up like this: “The White Helmets are jihadi auxiliaries… They are not, as claimed by themselves and by their supporters… simple rescuers. They are not volunteers. They are paid professionals of disinformation.”

Giovanni claims her article is a “forensic take down of the Russian disinformation campaign to distort the truth in Syria.” In reality, Giovanni’s article is an example of western disinformation using subjective attacks on critics and evidence-free assertions aligned with the regime change goals of the West.

Rick Sterling is an investigative journalist based in the San Francisco Bay Area. He can be contacted at rsterling1@gmail.com