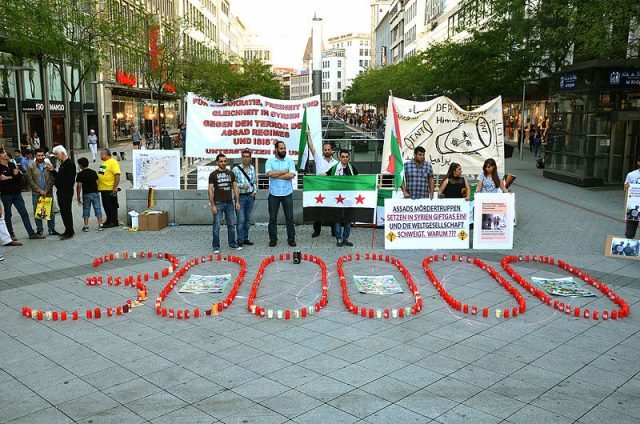 How can we complain when we will not ourselves deal with the armed Islamist opposition to Assad (I am not at this point talking about Isis) or try to arrange our own ceasefire, even with Russian help? After all, we’ve been arming these people for years.

Here are some cruel facts about the siege of Ghouta. They have become buried in the real rubble and blood and the sham and apocalyptic expressions of horror from the West. The first and most important dimension to the siege was a remark by Sergey Lavrov, the Russian foreign minister, who said on Monday that Moscow and the Syrian government “could deploy [in Ghouta] our experience of freeing Aleppo”. This single phrase – otherwise translated from the Russian as “draw from the lessons of Aleppo” – was regarded, when it was heeded at all, as a warning that Ghouta would be destroyed.

But the Russians spent many months, along with the Syrians, trying to arrange for the departure of Syrian civilians from eastern Aleppo before it was recaptured; after huge advances into the suburbs by Syrian troops, there was indeed an exodus of the innocent, in which armed opponents of the regime were also permitted to leave. Many were escorted by armed and uniformed Russian military police who took them to the Turkish border. Others preferred – rashly, no doubt – to move under escort to Idlib, the great provincial “dumping ground” for Islamist fighters and their families which is now, inevitably, also under siege.

What Lavrov has in mind is a similar agreement with the armed rebels of Ghouta. Both the Russians and the Syrians have direct contact with those they speak of as “terrorists” – a word beloved of the West when they are attacking the same Islamist Nusrah (al-Qaeda) groups as the Russians; which is why, when the siege of the last rebel district of Homs ended last year, uniformed Russians troops stood next to the armed and often hooded Islamists allowed to leave for Idlib. I saw this with my own eyes.

The “rebels”/”terrorists”/“Islamists”/“armed opposition” – you must pick the mantra of your choice – are, of course, the one other “fact” of the Ghouta bloodbath which must not be addressed, spoken of, mentioned, referred to or even acknowledged. For the Nusrah fighters in Ghouta – whether or not they have brought pressure on the civilians of the suburbs to stay as “human shields” – are part of the original al-Qaeda movement which committed the crimes against humanity in America in 2001 and which have, more often than not, been prepared to cooperate in Syria with Isis, the vicious cult which the US, the EU, NATO and Russia (add here all the other usual defenders of civilisation) have promised to destroy. Nusrah’s allies are Jaish al-Islam, yet another Islamist group.

This is a very odd state of affairs. No-one should doubt the scale of the slaughter in Ghouta. Or the suffering of the civilians. We cannot howl with indignation when the Israelis assault Gaza (using the same “human shields” motif as the Russians today) while making excuses for the bloodbath in Ghouta because the “terrorists” under siege are Isis-tainted al-Qaeda Islamists.

But these armed groups are curiously absent when we express our outrage at the carnage in Ghouta. There are no Western reporters to interview them – because we (though we don’t usually say so) would have our heads chopped off by these defenders of Ghouta if we tried or even dared to enter the besieged suburb. And the footage which we receive shows – incredibly – not a single armed man. This does not mean that the wounded or the dead children or the bloodied corpses – albeit with faces “blurred” by our own thoughtful television editors – are not real or that the film is fake. But the footage clearly does not show all of the truth. The cameras – or their film editors – do not depict the al-Nusrah fighters who are in Ghouta. Nor are they going to.

Earlier archive film of sieges – of Warsaw in 1944, of Beirut in 1982, of Sarajevo in 1992 – show the actual fighters who were defending these cities, along with their weapons. But footage from Ghouta – like almost all the film from eastern Aleppo – contains not a frame of acknowledgement that these armed men exist. Nor have I come across a single mention of them in our commentaries of civilian suffering, save for passing references to Ghouta in the US and European media as “rebel-held”. Who, then, killed by mortar fire the six civilians — 28 were wounded — in the centre of government-controlled Damascus 24 hours ago? A tiny percentage of the Ghouta dead, to be sure. But were they done to death by ghosts?

This is an important omission – because the key to any end of this civilian killing-zone and its latest 250 dead lies in the ability to open some form of immediate contact between the armed besiegers and the armed attackers. Lavrov’s comments in the past two days suggest that the Russians had agreed a return to the weirdly-named “deconfliction” status of Ghouta, an effective ceasefire in which aid could be sent in to Ghouta and the wounded taken out. But – this, of course, according to Lavrov – al-Nusrah broke the deal.

Well, maybe. Yet how can we complain when we will not ourselves deal with the armed Islamist opposition to Assad (I am not at this point talking about Isis) or try to arrange our own ceasefire, even with Russian help? After all, we’ve been arming these people for years! But no, we shall take no such action. Thus we ring our hands with ever-increasing hypocrisy and ever more cringing hyperbole.

In the past 48 hours, for example – and let us pay attention to this – we have heard from the US, from the UN, from NGOs and from doctors in touch with the hospitals of Ghouta that the suburb is the scene of “flagrant war crimes on an epic [sic] scale”, “the day of judgement”, “the massacre of the 21st century”, of “hysterical violence” – whatever that means – and, from the poor old UN itself, that the violence visited upon Ghouta is “beyond imagination” to such an extent that they “have run out of words”.

Again, let us remind ourselves that the people of Ghouta are paying a grotesque and ferocious and disgraceful price in human suffering for their location in the Syrian war, at the hands of – yes – the Russians and the Syrians. But what do the preposterous saints of the UN bureaucracy – who, alas, will never, ever, “run out of words” — and those who describe the siege of Ghouta as “the day of judgement” really think they are talking about? Let us, amid atrocities, keep a sense of proportion here. Auschwitz and the Jewish Holocaust and the Rwanda genocide and the Armenian Holocaust and the countless mass murders of the 20th century (we might discreetly remember Russia’s losses at the hands of Hitler’s hordes) were a lot closer to the “day of judgement” than Ghouta. To compare this terrible siege with the crimes against humanity of the past century is to dishonour millions of innocent victims of far worse crimes.

The truth is that these expressions of horror from “our” side are substitutes. Why did not the UN “run out of words” in the first year of the war? Many of the Syrian victims had already run out of words by 2012 – not least because a large number of them were dead. The statistics we use suggest that 400,000 civilians are reported to be trapped there. What is the real figure, we might perhaps ask? We were told that 250,000 were trapped in Aleppo in 2016 and it turned out to be nearer 92,000. But 92,000 was war crime enough. What if only 200,000 are trapped in Ghouta? But that is enough to constitute a horror story on its own.

The reality is that the siege of Ghouta will continue until its surrender and evacuation. No words we utter will prevent this gloomy scenario and we know this – or at least those who lead our moral high ground do. Nothing on the ground will change. And when Ghouta “falls” – or is “liberated”, as its besiegers will undoubtedly tell us – then the destruction of Idlib city will begin. And once more it will be the day of judgement, “hysterical violence” and “the massacre of the 21st century” (presumably outdoing the Aleppo and Ghouta sieges together). No Western condemnation will stop this. We are bankrupt, bellowing our outrage without the slightest hope – or intention – of sparing the innocent. That is the sad story of Ghouta which, I fear, historians will record. Worse still is that they will be right.

From war in Syria to bombing in Somalia, we are witnessing the division of humanity