Vietnam’s Lessons and the U.S. Culture of Violence 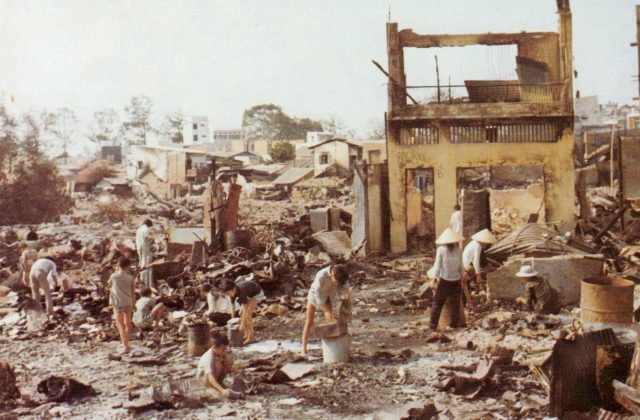 Back in October 2016 I wrote an analysis entitled “Natural Born Killers? It described and commented on research on the origins of human violence published in the science journal Nature. The conclusion offered in the article is that humans come from an evolutionary line that has the capibility for violent behavior genetically built into it. It is a reasonable hypothesis. As just about every serious historian knows, the human propensity for lethal violence goes back as far as the evidence can take us — so far that there can be little doubt that this trait is inherited from our pre-human ancestors.

Yet, as the Nature scholars also point out, in the case of our species, culture has the ability to “modulate our bloodthirsty tendencies.”

I bring this up now because there is new interest in the slaughter and massacres that took place during the Vietnam War. This may in part be a response to the fact that last month (January 2018) marked the 50th anniversary of that war’s Tet offensive.

America waged war in Vietnam roughly from 1961 to 1975. The starting date is a “rough” one because the United States never actually declared war. In this 14-year span it is generally accepted that the turning point in the struggle came during the Tet offensive of 1968. Tet is the term used for the Vietnamese new year, and that celebratory time in 1968 was when the North Vietnamese and the Vietcong launched attacks in some 100 South Vietnamese towns and cities, in an effort to change the course of the war in their favor. Though very costly (an estimated 50,000 Vietnamese casualties) the offensive worked, at least in the long run. Within a year the United States started a gradual withdrawal from the country. Although the fighting dragged on for another seven years (until the fall of Saigon in 1975) it was Washington’s stubborn search for face-saving terms that largely kept it going.

By the time of the Tet offensive, the war had degenerated into mutual slaughter. The U.S. ended up killing some 3 million Vietnamese, many of them civilians. The massacre at My Lai on 16 March 1968, has often been cited as the “singular” American example of such criminal behavior. It was on this date that a company of soldiers of the 23rd Americal Division murdered, without provocation, 504 peasant villagers of all ages and both sexes.

The massacre itself, and its background year of 1968, have been accurately described in a recent book, My Lai: Vietnam,1968 and the Descent into Darkness, by Howard Jones (Oxford University Press, 2017). In turn the book has been expertly reviewed and elaborated upon in the popular London Review of Books (LRB) (25 January 2018) by Max Hastings. It is to be noted that both the publisher and the reviewing magazine are located in the United Kingdom. The reviews of the book offered in the United States have been, to date, in academic journals, including the U.S. Army’s own Army University Press. Just about all of them have described Jones’s work as definitive and a seminally important read. Whether this will translate into public attention in the U.S. is doubtful.

Modern efforts to explain happenings like the My Lai massacre usually bring up the problem of waging war when it has become hard to know who the enemy is – in other words, when not everyone is wearing a uniform and a lot of resistance is coming from irregular forces. The Army University Press review raises this issue.

Another possibility is that such behavior is an “inevitable consequence of combat.” In his LRB review, Max Hastings gives a long introductory account of a number of other massacres committed by soldiers in modern times, including in Vietnam. As a consequence one comes away with the feeling that, within a war zone, these criminal acts are almost common.

While it is no doubt true that a combat situation (or perhaps we can say the culture of combat) does raise the probability of massacres, they do not make them “inevitable.” Suggesting that they are, sounds more like an excuse than an explanation. After all, most combat soldiers are not participants in massacres.

This brings us back to the judgment of the research published in Nature – we all might well be potential natural born killers who are restrained or encouraged by cultural variables. Within the combat scenario, Hastings suggests that a culture of self-restraint accepted and enforced by the officer corps can forestall mass killings.

This is of particular interest when it comes to the peculiar culture of the United States. In Vietnam many of the massacres (My Lai was by no means unique) were perpetrated by soldiers as well as their officers from the so-called “land of the free.” I use this descriptive term intentionally because one of the things that is often declared to be constitutionally “free” from rational regulation in the U.S. are guns. And, as a consequence, these troops came out of a “gun culture.”

It should be kept in mind that the American gun culture, with its accompanying violence, is not new. The 2014 book Gun Violence and Public Life documents this history. If anything has changed from the 1960s to today it is that the public now has access to military grade weapons. What also existed then as now is a culture of bigotry and racism. In the 1960s this was just being confronted by the Civil Rights Movement. It all made for an explosive mix that carried over to influence perceptions of and behavior toward the Vietnamese.

If the Nature study’s conclusions can be believed, modern violence both of military and civilian origin can be moderated by manipulating culture. In the American case this means overcoming the gun culture as well as racism. There are many ways to do this. It can be done through public education as well as the way a society designs and applies its laws. However, if any of these approaches to a safer, less violent society is to work, citizens must commit to a consistently enforced, long-term, indeed multi-generational, effort of reform. None of this will happen until politicians and the courts understand the Second Amendment of the Constitution (the present interpretation of which underpins the nation’s gun culture) in a more literal and reasonable way. And that won’t happen until public opinion overwhelms the ideological rigidity of the U.S. gun lobby.

In the United States the desire for rational reform of the gun laws goes up after each mass shooting and then is stymied by a rigid, but very politically influential, gun lobby. This scenario is part of a “culture war” that is ongoing within the American body politic. It involves not only the issue of gun control but also other issues such as abortion, gay rights, the promotion of racial equality and immigrant rights. So heated is this “culture war” that one might see it as a (so far) non-violent form of civil war.

The lessons of Vietnam, and a greater awareness of the massacres that occurred during this war, speak to the need to reform U.S. culture – to make it less violent and more tolerant. Thus the Vietnam experience should be incorporated into the current debate about guns in America. It would be a major achievement if the 1968 slaughter at My Lai could help stop today’s slaughter on the streets of the U.S.