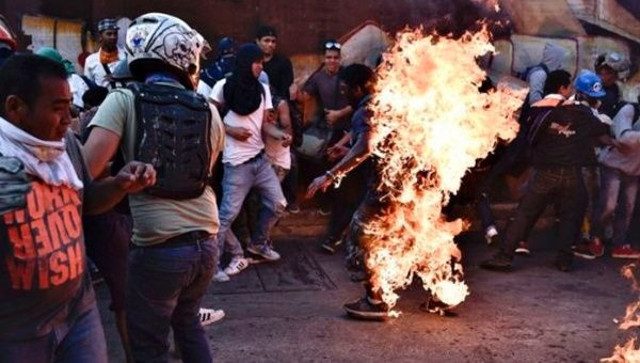 The violence seething from opposition sectors can only be viewed as systematic, motive-driven and purposeful.

Like many other Venezuelans during the past few months, Luigin Paz was attempting to avoid a roadblock set up by opposition protesters as he drove to work on his motorbike.

But Paz was hit by a truck driver who swerved to avoid demonstrators throwing rocks at the road.

As Paz lay injured on the ground, a protester threw a petrol bomb at the van.

Jose Bravo, a passenger in the truck, suffered third-degree burns to 95 percent of his body.

20-year-old Paz was burned to death.

Since opposition protests calling for the resignation of Nicolas Maduro began in April, the country has witnessed several similar incidents.

In Miranda, a focal point of the unrest, Orlando Figuera was mobbed, beaten, stabbed and set on fire by a crowd of opposition protesters.

Some media outlets suggested the group thought the young, dark-skinned man was stealing.

Figuera, who initially survived the attack but later died from his injuries, believed he was targeted for looking like a ‘Chavista.’

In another incident, Amelina Carrillo was killed after being hit in the head with a frozen water bottle thrown from a building.

Like Figuera and many of the victims over the last three months, Carrillo was not taking part in the protests. He was simply in the wrong place at the wrong time.

Many media reports have said they were the victims of government violence.

While several people having been killed in or around the protests – and some by security forces – a significant and growing number have died as a result of the demonstrations.

Dozens of Venezuelans have reported being harassed or beaten by protesters who thought they were allied to the government.

In one case, a businessman and his bodyguard were beaten in a mall by a crowd who mistook the minder for a socialist lawmaker.

Supporters of President Nicolas Maduro have also been killed.

Several workers were gunned down during a pro-government rally in Merida.

In another incident, Pedro Josue Carrillo, a local socialist party activist was killed – his body was found several days after he had been kidnapped.

The protests have also claimed the lives of five members of the security forces.

Some such as 28-year-old National Guard Sergeant, Niumar Sanclemente were killed by gunfire.

Social media too is now rife with death threats to government supporters, officials, and even journalists seen as supportive to Maduro or others who have been critical of the protests.

Opposition supporters in the media and academia had falsely accused her of collecting information on protesters for Venezuela’s military intelligence.

Public appearances by Martin and her producer, Mike Prysner were also targeted.

A significant number of Venezuelans who are opposed to the government have been taking part in peaceful protests.

But more violent elements have received little international criticism and this is a growing source of grievance for the Venezuelan government and its supporters.

As Venezuela’s new Foreign Minister Samuel Moncada said during his first press conference, the actions from violent sectors – such as the helicopter attack on the Supreme Court building this week – would be not treated as merely ‘protesting’ in any other country, and certainly not in the countries that have been most vocal in their ‘concern’ around the situation in Venezuela.

The violence seething from opposition sectors towards the population in general and Chavismo, in particular, can only be viewed as systematic, motive-driven and purposeful.

For years, opposition leaders and pundits have been stoking hate not only against the government but against its supporters – portrayed as poor, dark, lazy mass. Fueled by class and race based hatred sown over decades and rationalized by the economic crisis, Venezuela is now seeing a nascent yet burgeoning form of right-wing – or fascist – violence in the fashion of the Southern Cone dictatorships of the 1970’s and 80’s, Colombia’s paramilitaries or Central America’s death squads.

With a vote for a constituent assembly looming, the undeclared but evident objective of sowing fear among both Chavistas and neutrals is having effect. With opposition leaders calling for actions to disrupt the vote, many are understandably wary of the dangers of crossing paths with Venezuela’s contrarevolucionarios.

For now, the call for dialogue is falling flat among those who feel their rage, and even bloodlust is supported and justified.