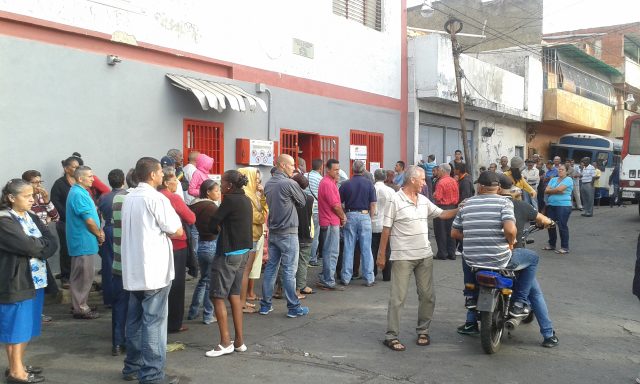 In a climate of dire economic war/crisis and foreign aggression, Venezuelans took to the polls to elect their president and regional legislative councils. Chavismo won big in both contests, with president Maduro securing a second term until 2025. The international reaction from the US and its allies was already pre-scripted, and the dishonest coverage from the mainstream media was also to be expected. We take a look at the election, how the electoral system works, these reactions, and also share some observations after witnessing events on the ground.

Incumbent president Nicolás Maduro won in a landslide, taking nearly 68% of the vote, while his closest rival Henry Falcón could only muster 21%. With all the votes tallied, Maduro totalled a little over 6.2M votes. Amidst a devastating economic crisis and increasing imperialist aggression this is a very significant victory, but it nevertheless falls very short of previous totals in chavista victories, and very short of the 10M votes that Maduro “demanded” during the campaign (1). Falcón had distinguished himself by defying the mainstream opposition’s call for boycotting the elections, only to fall back to the familiar tune of not recognising the results after losing.

Participation in these elections was just 46%. This number was historically low… for Venezuela! In the most recent presidential elections in Chile and Colombia, to name just two examples, participation was respectively of 49 and 48%, and nobody even floated the possibility of questioning their legitimacy. So if the low turnout is going to be mentioned, it should only be because Venezuela is (rightly) held to a higher standard than the regional US allies.

We had the chance to witness the electoral process on the ground as a member of the international accompaniment mission (acompañante electoral), alongside the Venezuelanalysis team. Our observations pretty much mirrored what the results would later show. Popular and working-class neighbourhoods (barrios), such as Catia, El Valle or Petare, had a very decent turnout, starting from the early morning hours. By contrast, voting centres in middle- and upper-class neighbourhoods such as El Paraiso and Chacao, traditional opposition strongholds, had very few people. 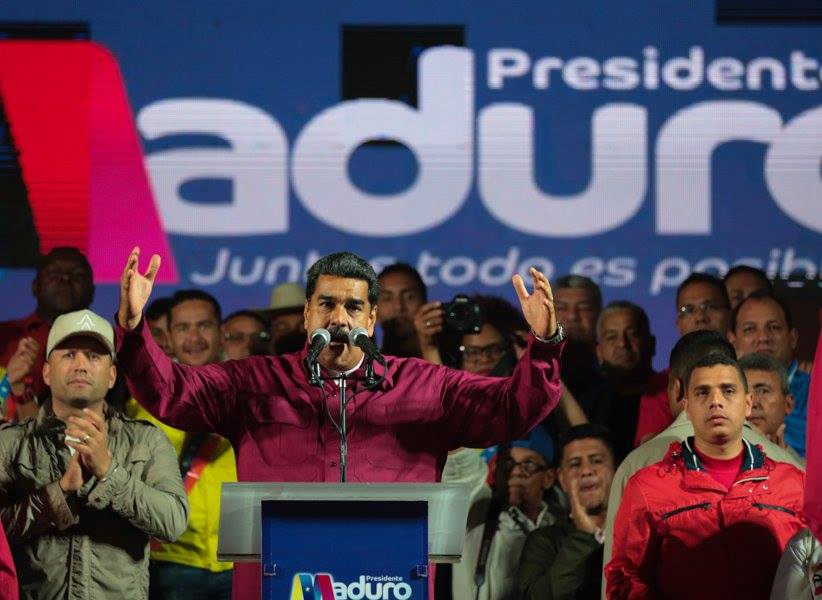 Given the amount of attention dedicated to Venezuela’s voting system, you would think that the media would be compelled to at least explain how it works, but of course that would undermine all the half-truths and outright lies that are published. So, for the umpteenth time, here is how it works: 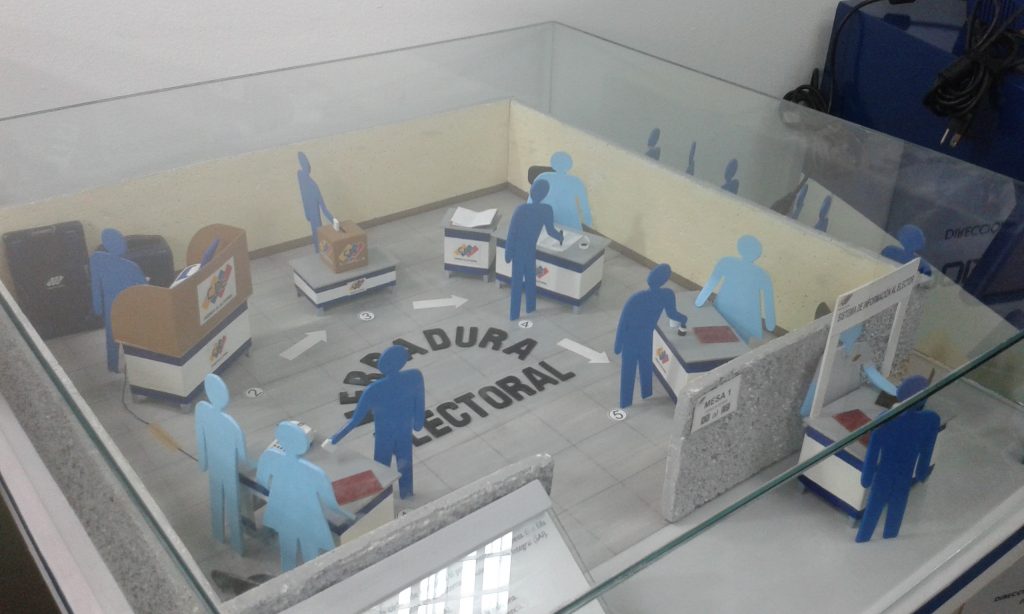 Depiction of the voting process, called the “electoral horseshoe” in the CNE logistics and production centre in Mariches. See above for a detailed description. Step 5 (indeleble ink) is no longer used since the authentication system prevents multiple voting. (Photo: Ricardo Vaz)

This is not the whole story, as there are also plenty of audits (14 in this case) done before the elections, with members of all political parties of the international accompaniment mission present, and after the election. But just this short explanation shows you why you cannot just stuff ballots (the vote is electronic), you cannot vote more than once (authentication system will not let you and the electoral roll total will not match), you cannot just enter more votes into the machine remotely (the machines are offline except for the final transmission of results, plus the match against the paper ballots would fail), etc.

More than that, members of the hundreds-strong international accompaniment mission on the ground have praised the Venezuelan electoral process as free and fair. Nicanor Moscoso, president of the Council of Electoral Experts of Latin America (Ceela), insisted that the results must be recognised because they reflect the will of the people.

Ridiculous claims of fraud and irregularities

The existence of all these checks and audits is the reason why in over 20 elections, with constant cries of fraud whenever the opposition loses, no one has produced a single shred of evidence of fraud (2) (3), although that has not stopped the media from repeating these claims uncritically over and over. Given that in each of the thousands of voting centres the polling station members are chosen randomly and opposition witnesses are present, and they all sign an act at the end confirming that everything is in order, to claim there was fraud without anything to back it up is to take your supporters/listeners/readers for idiots.

One of the most widespread allegations meant to undermine the legitimacy of the process was that someone from the CNE told Reuters that by 6 PM participation was just 32.3%. This is a pure fabrication, as any of the hundreds of acompañantes who were on the ground could have told any of these outlets if asked. Simply put, the CNE does not publish preliminary data because it does not have access to it. Only when when all the audits (to 54% of voting centres) have been completed and a sizeable number of voting centres have transmitted their numbers, so as to make the results irreversible, are the figures made available.

So this claim might as well have been made by the Queen of England. It is akin to writing a headline “caveman source claims that the Earth is flat” when the Earth’s curvature has been measured. It is giving credence to random allegations about a number that has actually been measured and audited. And going back to what we said before, given such a large discrepancy and the large number of people involved, surely there would be ONE piece of evidence about ONE voting centre where the final tally had supposedly been inflated.

In the absence of hard evidence to back up fraud claims, the discourse is shifted towards other “irregularities”. While this is just small sample hearsay, opposition electoral witnesses did not report any irregularities when talking to us, although they did expect a low turnout from opposition voters. Some did complain that the puntos rojos were closer than the stipulated 200m, but laughed at the notion that voters would change their mind or be turned into zombies by the sight of red canopies. In fact, these puntos rojos have been present in elections for the past 20 years, and used to have their opposition-coloured counterparts across the street.

These places mostly serve as gathering points as people wait for the voting to unfold, and more importantly to track participation from their ranks, to see if further mobilising is necessary or not. The notion that these were a factor in the results, embraced hysterically by Falcón and his team and then echoed by the media, reeks of desperation. Other complaints, such as assisted voting (people helping elderly voters) irregularities were also insignificant in terms of their relevance for the final numbers. 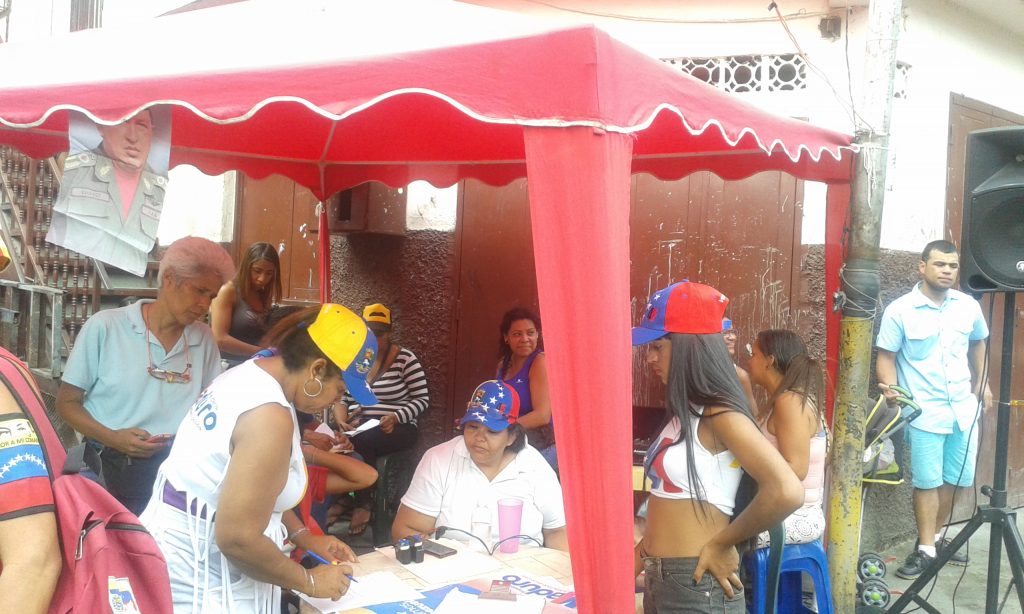 The international reaction was no surprise because it was already pre-determined before the elections. Such is the absurdity and dishonesty when it comes to Venezuela. And at this point it makes no sense to distinguish the reaction of the US State Department and the ones from its multiple echo chambers, be they spineless allies like the self-appointed Lima Group and the EU or the propaganda outlets of the mainstream media.

After the opposition MUD delegation walked away from the negotiating table with a deal already hammered out (according to former Spanish PM and mediator Zapatero), allegedly under US orders, the US quickly moved to announce that the elections would be fraudulent and illegitimate, its results not recognised, and all the usual suspects followed suit. And that is precisely what happened after Maduro’s victory, with people who claim to be champions of democracy vowing to punish Venezuela for the unforgivable crime of holding elections.

We have dedicated plenty of efforts to deconstructing the mainstream media propaganda surrounding Venezuela, and elections in particular, but it feels more and more like a waste of time. People that truly want to be informed about Venezuela should simply look for sources that do more than repeat the State Department talking points or uncritically echo the allegations of the Venezuelan opposition. FAIR did an excellent job of pointing out how even the MSM headlines have become unanimous, with “amid” their new favourite preposition. It is fair to say that amid so much propaganda, there is very little actual journalism left.

It would serve us well to go back a few months to the Honduran elections. Here there was actually plenty of evidence of fraud, which allowed for an irreversible trend to be reversed in order for the US-backed incumbent Juan Orlando Hernández to secure victory. Despite a few protests and some tame calls for holding new elections, the fraudulent winner was eventually recognised and it is now business as usual. Believe it or not, Honduras is part of this Lima Group that has the nerve to question the legitimacy of the Venezuelan elections.

Had the reaction been just this shameful bombast it would not be much of a problem. But it came followed by the tightening of the economic noose around Venezuela, i.e., new sanctions. The latest round of sanctions imposed by the Trump administration again fell short of an oil embargo, which has been increasingly floated by US officials, but targeted Venezuela’s and PDVSA’s ability to collect and re-finance debt.

After the sanctions and all the meddling, Maduro reacted by expelling the two top US diplomats in Caracas. Nevertheless we can expect the screws to be further tightened as the US and its followers show no signs of backing down from their regime-change crusade, and imposing as much suffering on the Venezuelan people as possible is their way to go. For all the sanctimonious claims that sanctions are only meant to hurt those-corrupt-officials-who-have-hijacked-democracy, we can thank British FM Boris Johnson for his clumsy honesty:

“The feeling I get from talking to my counterparts is that they see no alternative to economic pressure – and it’s very sad because obviously the downside of sanctions is that they can affect the population that you don’t want to suffer.”

So from an international perspective the elections did not change much, perhaps accelerating the aggression we had been seeing. But on the inside the picture is different. There were very clear signs, whether the loud cries from those who voted or the loud silence from those who did not, that the current economic situation needs to be dealt with, and fast. We already know what the solution would be if the right-wing returned to power, electorally or otherwise. The question is whether amidst this international siege the Bolivarian government has enough resources and political will to radicalise their path.

(2) Perhaps we should clarify that no credible evidence has been produced. After the 2013 elections defeated candidate Capriles produced a dossier of “evidence” that was mercilessly torn to shreds, because none of it held any water.

(3) A possible notable exception was the gubernatorial election in the State of Bolívar this past October. Defeated candidate Andrés Velázquez published alleged acts that differed from the results on the CNE website, but this matter was not pressed further, perhaps because it undermined all the other unproven fraud claims.