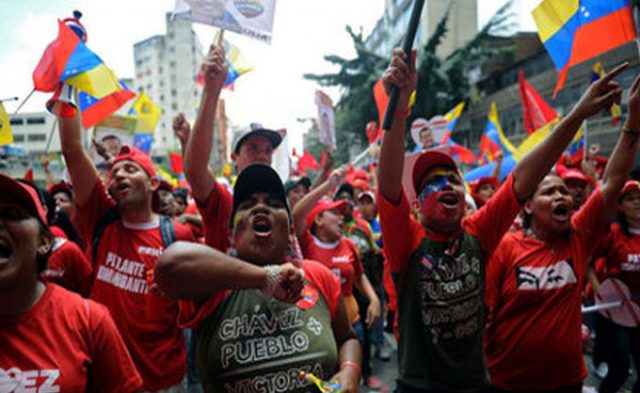 Venezuelan democracy is firmly on the path toward protagonist democracy as the main feature of its political system.

The governing United Socialist Party of Venezuela recently obtained a resounding electoral victory for state governorship. The election was called by the National Electoral Council at the instance of the National Constituent Assembly. Soon after, the opposition group Democratic Unity Coalition seemed to be in disarray. Enrique Capriles of the Justice First party, for example, resigned from the MUD coalition questioning Henry Ramos Allup of the Democratic Action party who in turn expelled the four AD governors who dared to be sworn-in in front of the ANC in acceptance of the election results.

Nino Pagliccia asked Canadian author Arnold August to give his assessment of the political significance for the Bolivarian process.

In the last elections of Oct. 15 for the 23 state governorships in Venezuela, the governing party won 18 states. What is your analysis of this result in the context of the political process in Venezuela?

August: Not only did it win the 18 states, but the PSUV substantially increased its popular vote compared with the National Assembly elections held in December 2015, when the opposition won by a wide margin. Thus, in a short period of time, the Bolivarian Revolution reversed the situation. These latest October 2017 state elections, therefore, are of great historical significance not only for Venezuela but for the whole region. The U.S. is hoping to subvert the Bolivarian Revolution and use it as a springboard to weaken, and even destroy, other left-wing movements and governments in the area. The latter represents an alternative to capitalism and they, along with other powers such as Russia, China and Iran, flourish as a major multi-polar challenge to the U.S. goal of world hegemony.

Thus, because of the domestic and international importance of this resurgence in the last elections, the analysis is still ongoing. Any serious observer is obliged to continue to reflect upon and investigate the upset victory, as you are striving to do now with this interview.

Nevertheless, there is one ongoing conclusion that I have been exploring since the elections. The election results marked a watershed in Venezuelan democracy. The majority of the people and the Nicolas Maduro government crossed the Rubicon from participatory democracy toward protagonist democracy. They may not have yet reached terra firma on the other shore of the Rubicon, but Venezuelan democracy is firmly on the path toward protagonist democracy as the main feature of its political system.

Some Bolivarian Revolution sympathizers and activists in Venezuela and outside may raise their eyebrows in surprise, and even suspicion, with regard to my view. The analysis may seem, if looked at superficially and dogmatically, as an underestimation of the outstanding Bolivarian experience in participatory democracy.

However, this is far from being the case. For example, in my 2013 publication Cuba and Its Neighbours: Democracy in Motion, there is a section dealing with Cuba’s neighbor titled, “Venezuela: New Experiments in Participatory Democracy,” that provides a very positive analysis.

Protagonist democracy means that the people are reaching the stage of consciousness and action – individually and collectively – to exercise on a daily basis their rightful protagonist role in their own revolution.

We saw this in the massive uprising by the Venezuelan people. A civic-military alliance overturned the U.S.-supported April 11, 2002, coup against the Chavez government only two days later on April 13. This is how the now legendary Chavista slogan came into being: “Every 11th has its 13th!” The people themselves are able to overcome even the most adverse situation and seemingly hopeless obstacle by taking affairs into their own hands.

This growing protagonist feature of the Bolivarian Revolution’s democracy goes hand in hand with its development of socialist measures. It has been evolving over the years at a steady pace despite the economic war waged by the U.S. against Venezuela. Alongside this evolution, protagonist democracy has deepened and broadened to increasingly become a daily feature in the lives of the people.

The Chavez thinking on this progression, as expressed above, is crucial to viewing today’s Venezuela from his perspective: socialism cannot be defended nor, even less, be developed without a political and electoral system based on protagonist democracy. Nonetheless, this developing level of consciousness is not tied to elections. On the contrary, the electoral process is just part of the battle of ideas that is being waged nationally and internationally in favor of socialism.

Out of necessity, this political movement in Venezuela increasingly becomes “daily” – perhaps not literally but very close to it since the death of Chavez. Ironically, Barack Obama and Donald Trump, by striving to subvert the participatory and protagonist people’s political defense of its Bolivarian Revolution and the biggest oil reserves in the world, have contributed to pushing the revolution to convert democracy toward, as Chavez said, “above all protagonist.” Thus, the paradox: Venezuela is now anchored in an even more favorable position to defend and expand its revolution, as the state election results glaringly exposed.

The 2002 United States policy of blatant interference, as exemplified in the coup d’état, has become a daily staple in other more “smart power” forms feeding the unrest and crisis in Venezuela. This approach began to take shape after Obama refused to recognize Nicolas Maduro as the constitutionally elected successor to Chavez on April 14, 2013.

There has been virtually no let up since, with Obama handing the U.S. Venezuela game plan over to Trump on a silver platter. Only the form of the 2002 attempted coup has changed. It has become a slow-motion coup but with the same intent: to smash the socialist program. The response is that, metaphorically, every day in Venezuela is lived with the slogan “every 11th has its 13th” at the forefront.

However, unlike the military coup d’état attempt in 2002, now the “11th” is represented by the slow-motion coup that the U.S. has been fomenting since April 2013 to date, while the “13th” is the day-to-day people’s revolutionary struggle during this time to maintain political power. It was – and is – either that the Venezuelans will be the authors of their own revolution or that the revolution will be subverted.

And what is the role that the National Constituent Assembly plays in the country?

August: On May 1, 2017, the Maduro government announced the daring convening of elections to the National Constituent Assembly to be held on July 30, 2017. The country was in the throes of the U.S.-provoked crisis. This was the only way out for the well-being and peace of the entire nation. The time had come to “re-found” the Bolivarian Revolution, just as in 1999 with the new Constitution after the election of Chavez, who founded it as a first step.

Please allow me to pursue the “crossing of the Rubicon” metaphor. The successful ANC elections, its dramatic convening, and the results work together to represent the first plunge into the Rubicon: the protagonist feature of the Bolivarian Revolution overtook its complementary participatory characteristic to become what Chavez said was “above all” the need for being protagonist and not only participatory.

The ANC itself constitutes the highest expression of a protagonist system whereby the people themselves govern. It thus provided the orientation and confidence for the state elections only two-and-a-half months later in order to propel the Bolivarian Revolution further toward crossing the river to the shore. This new form of people’s power is the basis for safeguarding and further developing Venezuela’s socialism.