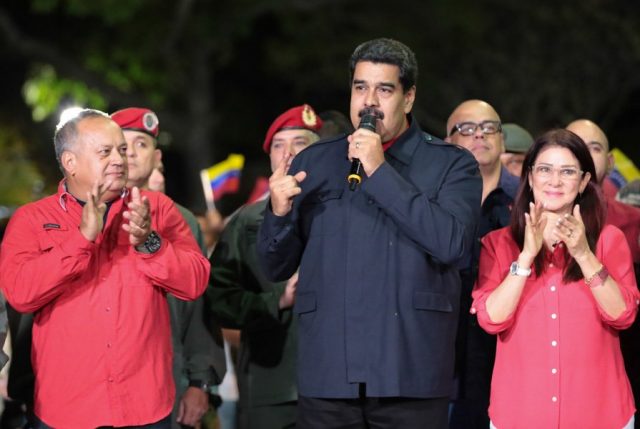 As the President of the Venezuelan Electoral Commission (CNE) read the results from the regional elections that took place on Sunday, October 15, one could feel the agony in the editorial rooms of mainstream media outlets. Chavismo had just won 18 out of 23 (1) governorships, a result that, according to them, could not have happened. International observers praised the electoral process and opposition claims of fraud, while uncritically echoed by the media, do not have a leg to stand on.

The United Socialist Party of Venezuela (PSUV) had a tremendous victory in these elections. Among the three quarters of the governorships secured, some were quite significant. Hector Rodríguez, a young and charismatic chavista leader, won the governorship of Miranda state back from the opposition. Miranda includes part of Caracas and was the main hotspot of opposition violence in recent months. Another example was Chávez’s home state of Barinas which also saw some unrest in recent months. Chávez’s younger brother Argenis was the candidate and the state was successfully held by the PSUV.

The opposition lost all three governorships won in 2012 (Miranda, Amazonas and Lara) and won five others (Anzoátegui, Mérida, Nueva Esparta, Táchira and Zulia), with three of them being on the border with Colombia and raising some fears of increased paramilitary activity. Overall participation was 61%, compared to 54% five years ago, and the PSUV had 54% of the vote, some 5.6M votes. This marked a complete reversal from the legislative elections of 2015. It showed that chavismo’s core support remains very strong, and that, due to its less than coherent actions, it was the opposition that failed to mobilise its supporters. 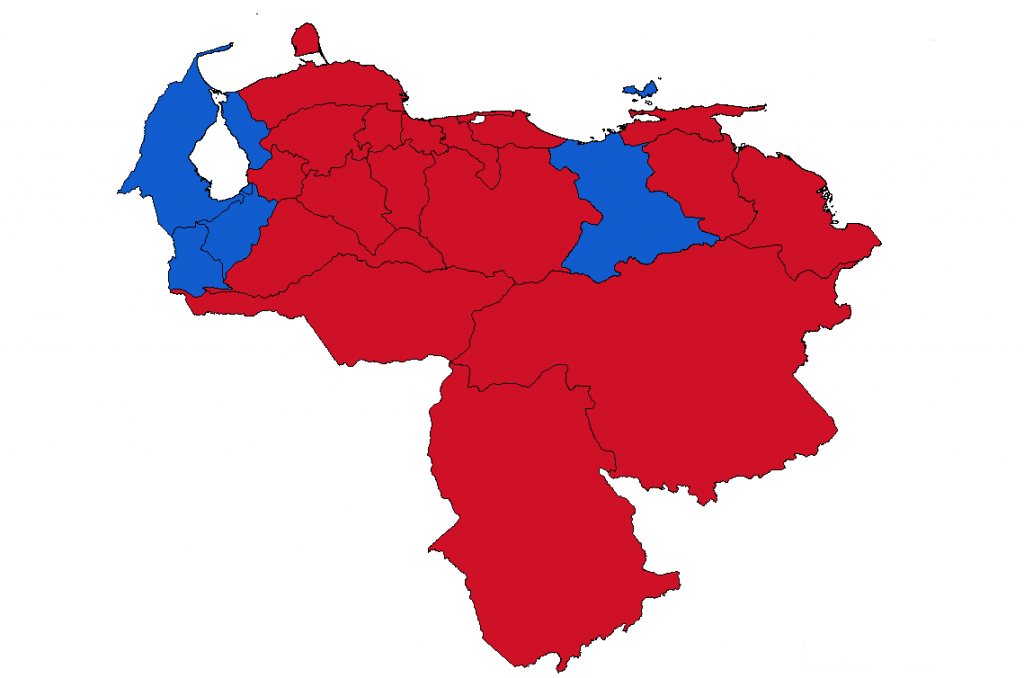 The media reaction was one for the history books. Having not paid much attention to these elections, the run-up had just the same recycled narrative: “if the elections are free and fair, the opposition will win by a landslide”. Once the results came out, rather than look to understand them and figure out what had gone wrong in their predictions, the media simply went down the rabbit hole. According to their biased narrative and historically inaccurate polls, this simply was not possible!

The evidence to back this impossibility was also less than convincing. There were the usual unsubstantiated, or easily disproved, claims of “fraud” (more on that later). The New York Times added the very scientific claim that “turnout appeared to be lower”, while Reuters, with its ever decreasing credibility, went further and talked about voters being forced to vote at gunpoint! Several analysts were paraded to claim that this result was not possible, some even argued it was “inconceivable”. It seems like these journalists and analysts have violated one of the cardinal rules of (information) trafficking: don’t get high on your own supply. Simply put, they have started believing too much in their own propaganda.

A resounding defeat for the Venezuelan opposition

Let us look at the actions of the US-backed Venezuelan opposition in the recent past. First they kicked off a wave of street violence in April that left more than 100 dead (most of them caused by opposition violence). With the media propaganda in overdrive they claimed they were on the verge of “tumbling the dictatorship”. But barring a few isolated occasions, the violence never spread far beyond the opposition strongholds, mainly in eastern Caracas.

So after all the talk of tumbling the dictatorship and demanding that Maduro step down tomorrow, the opposition turned to their supporters, and with a straight face asked them to go out and vote in the regional elections. Some of the more hardline factions refused to take part (and are now chiding the leadership for having done so) but most of the opposition parties carried on with the absurd discourse of “voting against the dictatorship”. In the end the absurdity caught up to them and the result was a resounding defeat. And then, like clockwork, the opposition claimed the results were fraudulent. Frankly, what else was left for them to do? They can send the defeated candidates to Washington DC and continue forming their “government in exile”. (3) 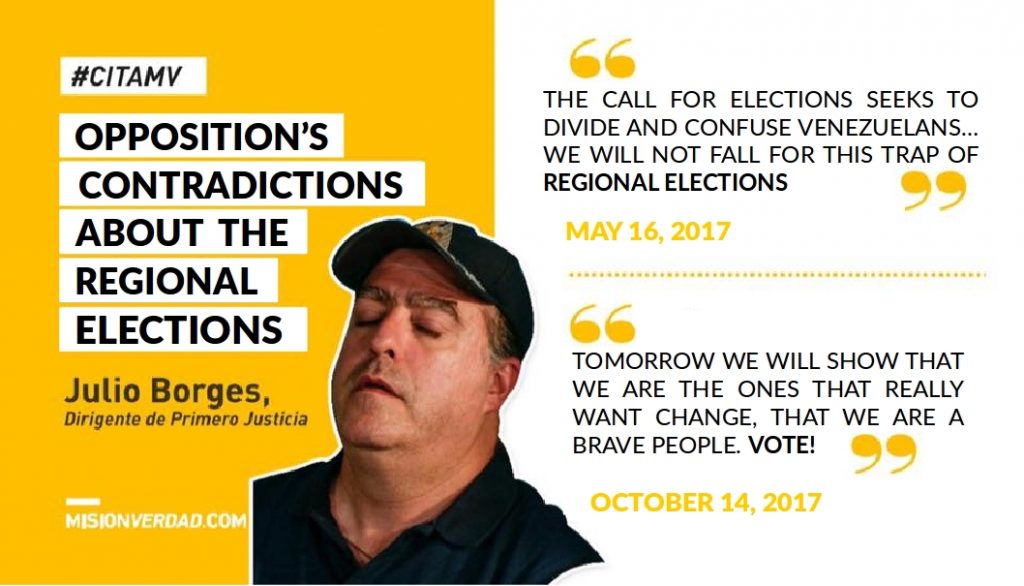 If the media coverage of Venezuela had any vestige of honesty, articles would explain how the voting works, so that this “fraud” allegations can be put into context. In a nutshell, voters mark their vote in a machine, a paper ballot is printed, and if this matches the electronic vote, they deposit the paper ballot in a box. After the voting is completed, a audit is conducted in 54.4% of the voting centres, randomly selected. This consists of tallying up the paper ballots and seeing if they match, up to a very small margin, against the electronic tally. This ensures that statistically the results are pretty much final, and that is what the CNE President Tibisay Lucena means when she says the results are “irreversible”.

Chavista, opposition and international monitors take part in pre-voting checks, are present at voting centres during the day, and they are also present during this audit. At the end of this process they sign an act (acta). So it is very hard to claim there was actual electoral fraud. In fact, defeated opposition candidate in Miranda, Carlos Ocariz, said himself that he had the acts and that was not the problem. Therefore it is ridiculous for France and the US State Dept. to claim there is anything wrong with the tabulation process.

The main “fraud” complaint in the media were that over 200 voting centres (out of 13.500) had been relocated away from areas where the opposition is strongest and into traditionally pro-government areas. What, conveniently, was left unsaid, is that these were centres that could not open for the Constituent Assembly elections because of opposition violence, which makes the CNE’s security concerns more than justified.

There were also protests that opposition candidates that had lost a (contentious) primary vote were left on the ballot, with the CNE arguing that the requests to remove them from the ballot were not filed on time. But looking at the results, all the contests were virtually two-horse races, with hardly any votes for third-placed candidates and with the winner taking over 50% of the vote, so any consequence of this was negligible (with the possible exception of Bolívar).

Another complaint was that some of the voting centres did not open on time. But given that, even after polls close at 6PM, everyone who is standing in line still gets to vote, this complaint does not hold water. All in all, the Venezuelan opposition, their sponsors, and the media, would have the world believe the elections were fraudulent because middle-class voters did not want to wait in line and much less see poor people on their way to vote. 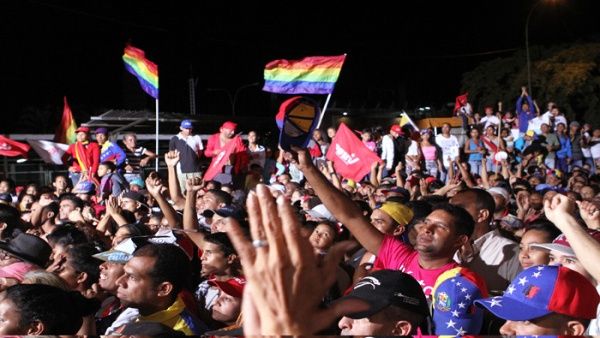 Chavista celebrations after the electoral triumph (photo by AVN)

It is hard to see where the Venezuelan opposition can go from here, with signs of in-fighting already clear. With their “doomsday cult” behaviour they are unlikely to have any success in reactivating the street violence, and thus their fate rests essentially on what the US empire can do. They will be hoping that (more) sanctions can inflict enough pain on the Venezuelan people to give them a chance of winning the presidential election next year. The most fanatical ones might hope that Trump follows through on the threats of military intervention.

One thing they can count on is the unwavering, unconditional support from the mainstream media. While opposition voters and supporters may use their memory and call out the inconsistencies and contradictions, no such thing is to be expected from the media. They will keep echoing claims that there was fraud in these elections, that the turnout on July 30th was inflated, and continue to milk the story of the former prosecutor who goes around saying she has proof of corruption involving high government officials. As with everything that can be used against the Bolivarian government, no evidence is ever needed.

As for chavismo, it is unquestionable that the two most recent electoral showings have been tremendous victories. Western analysts time and again fail to grasp the vitality of the Bolivarian Revolution, and belittle chavistas either as brainwashed zealots or people who simply fear losing their benefits (4). The reality is that, even through a deep economic war/crisis that has hit them hard, and regardless of what the leadership should have done differently, the Venezuelan poor and working-class still see this project as their own, one in which they are actors and not just spectators.

Maduro’s term has arguably seen chavismo playing defence all the time, with an economic war, a steep drop in oil prices, two incarnations of guarimba violence and constant international pressure and sanctions. Fresh off this electoral win and with the Constituent Assembly in place, it is imperative that chavismo seizes the moment to radicalise, to go on the offensive, with a year to go until the presidential elections. The support that it has retained through this storm should not be taken for granted, and there is now a window to fight corruption, increase working-class control in the economy, increase the influence of the communes, etc. This is not just a matter of keeping the grassroots involved, this is how the economic war will be won, this is how socialism will be built.

(1) The initial results were only final for 22 out of the 23 states. In the southern state of Bolívar the PSUV candidate was later confirmed to be the winner in a tight contest.

(2) Smartmatic, the company responsible for the software in the voting machines, claimed that “without any doubt” the turnout had been inflated by at least 1M votes. The claim was rejected by Venezuelan electoral authorities because the company does not have access to electoral data. Several solidarity organisations delivered a letter to Smartmatic CEO Antonio Mugica on September 8 demanding that the company either present evidence for its claims or issue an apology. There has been no response to this day.

(3) Right on cue, Maria Corina Machado has urged the opposition-controlled National Assembly, which has been in contempt of court since mid-2016, to nominate new electoral authorities. One hopes there is enough office space in OAS headquarters in Washington DC.

Cover photo: President Maduro lauded the election victory as a message against imperialism (photo by AVN)