Venezuela Is Under Attack for Asserting That Black Lives Matter 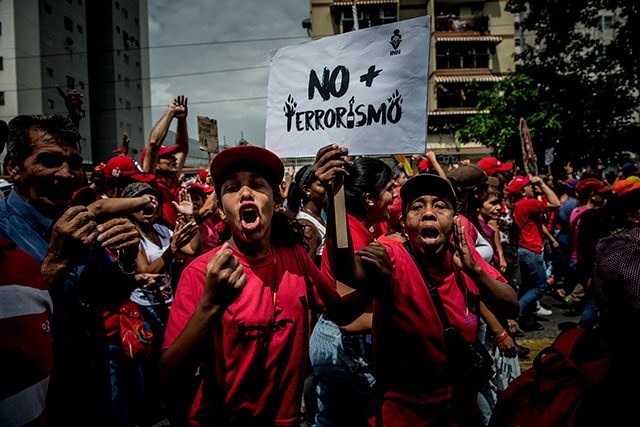 Truthout – A recent New York Times article, “Targeting Maduro Supporters in Miami,” describes the increasingly vocal body of anti-government Venezuelan “exiles” living in the United States who are escalating their agitation and harassment tactics against fellow Venezuelans who support President Nicolas Maduro’s socialist government. The Venezuelan opposition has enjoyed the unconditional support of the US government and mass media — conservative and liberal pundits alike — who simultaneously demonize and undermine the nation’s democratically elected government as a brutal dictatorship while portraying the US-funded and often violent opposition as peaceful, pro-democracy, anti-government protesters.

It is true that the current economic situation in Venezuela is quite dire; the nation is currently experiencing a triple digit inflation rate, and Venezuelans often face long lines to purchase basic commodities. While these challenges are due to a complex array of factors, including an economic war waged against the country along with the plummeting price of oil, The New York Times, The Washington Post, CNN and Fox News alike use an endless barrage of crisis imagery to turn public opinion against Venezuela’s government in order to destabilize and ultimately overthrow the socialist administration.

While the mainstream media tend to seek out stories that demonize Maduro’s government and glorify the anti-government demonstrators, they do not show the true character of Venezuela’s opposition movement nor shed light as to why they oppose the government. Indeed, many dozens of people, including government workers, have been killed in recent years due to the actions of violent right-wing protesters. Powerful media outlets conveniently gloss over what should be headline stories, such as that of Afro-Venezuelan Orlando Figuera. On May 20, the 21-year-old was walking through the government opposition stronghold of Chacao in Caracas when a group of masked anti-government “protesters” accused Figuera of being a government supporter. The mob proceeded to surround Figuera, stab him six times, douse him in gasoline and set him on fire. The young man died later at the hospital. President Nicolas Maduro called this the symbol of hate crimes in Venezuela, noting the racist character of this lynching of a Black Venezuelan. He is the ninth person to be killed at opposition barricades since the violent protests erupted in early April. The same powerful media outlets that routinely decry human rights abuses by Venezuela’s government remain largely silent about such racist acts of terrorism by the right-wing opposition.

It is important to note that while the vitriolic right-wing government opposition is concentrated among the white and economically elite elements of the population, the barrios, shanty towns and rural areas that are home to the poor, Indigenous communities and the Afro-Venezuelans have not erupted into protest for the most part because they support the government. In order to understand the roots of the elite opposition’s hate and racism toward Black and Indigenous government supporters, one has to understand the history of the presidency that preceded Maduro’s — that of Hugo Chavez.

Hugo Chavez and the Bolivarian Revolution

Decades of failed neoliberal policies and government repression set the stage for Chavez’s democratic election in 1998. After taking office, the Chavez government launched a vigorous campaign to combat poverty and social exclusion by redistributing the nation’s vast oil wealth to the poor, Indigenous and Afro-Venezuelan sectors of the population. Chavez called this movement against US neoliberal hegemony the “Bolivarian revolution,” inspired by the 19th-century South American independence hero Simón Bolívar. According to Chavez, the ultimate goal of this revolution was to build a 21st-century socialism from below that would be led by the poor, women, Indigenous people and Afro-Venezuelans.

One of the central goals of Venezuela’s revolutionary project has been to combat the historical legacy of racism against Indigenous and Afro-Venezuelans. The new constitution created under Chavez advanced the social, cultural and economic rights of Indigenous peoples, Afro-Venezuelans and women, including the recognition of intercultural education. Chavez was the first president in the Americas to openly acknowledge and embrace his Indigenous and African heritage. The privately owned Venezuelan media often referred to him with racist slurs. In 2005, Chávez declared that, “hate against me has a lot to do with racism. Because of my big mouth and curly hair. And I’m so proud to have this mouth and this hair, because it is African.” That same year, Chávez created the Presidential Commission for the Prevention and Elimination of all Forms of Racial Discrimination in the Venezuelan Educational System.

The Chavez government used the country’s oil wealth to increase social spending and developed revolutionary programs known as “social missions,” which have resulted in tremendous social gains for the country’s poor and socially excluded sectors, many of which are of African or Indigenous descent. By 2010, government programs had cut poverty in half and extreme poverty was reduced by two-thirds. In 2005, the UN declared the country illiteracy free, after 1.5 million Venezuelans were taught to read and write.

Thousands of Cuban doctors and health professionals were brought in to the country’s poor and rural communities, providing millions of citizens with unprecedented access to free health care. Through this program, more than 6,000 community health clinics have been built and millions of free consultations conducted. Other achievements include a massive public housing program that has built over a million housing units since its inception; the redistribution of thousands of communal land titles to Indigenous communities; and a democratization of the media through an explosion of community radio and television stations.

The South American nation strengthened its commitment to Black lives in 2011 when it passed a historic law banning racial discrimination, which according to the Correo del Orinoco International newspaper, “will establish mechanisms to prevent, respond to, punish and eradicate racial discrimination by any person, group of persons, public authorities, private institutions, and civil, economic, political, cultural, and social organizations.” The government also created a new census question that allowed citizens to classify themselves as Afro-Venezuelan.

In 2015, President Maduro came to Harlem to speak on a panel with Black leaders, including Opal Tometi, cofounder of Black Lives Matter. This move was reminiscent of Cuban revolutionary leader Fidel Castro’s 1964 visit to Harlem to meet with Malcolm X. Several months later, the Black Lives Matter network and other Black North American groups put out a statement denouncing US intervention in Venezuela and expressing their solidarity with Afro-Venezuelans and Indigenous Venezuelans in the wake of the 2014 right-wing national assembly election victories, which threaten to roll back the social gains of the revolution.

In the letter, the US activists thank Venezuela for its ongoing support of the African American community in the US, dating back to Chavez’s offer to send large amounts of aid, including doctors and disaster specialists, to post-Katrina New Orleans. George W. Bush, who largely left the city’s Black residents there to drown, turned down the offer. Over the last 12 years, Citgo — the Venezuelan-owned subsidiary company — has provided low-cost heating oil assistance to hundreds of thousands of poor families in 23 states, which have benefited Black residents in the Bronx, Boston, Chicago and Philadelphia, along with other cities. A number of African American leaders, activists and artists such as Danny Glover, Harry Belafonte and Jesse Jackson Jr. have traveled to Venezuela, building strong ties of solidarity with Chavez and the Bolivarian revolution, and acknowledging its connection to the Black liberation movement in the US.

Solidarity With Haiti, the Caribbean and Africa

Nowhere perhaps is the Venezuelan government’s commitment to solidarity with Black people more evident than in the generous aid and support it gave to the people of Haiti in the wake of the devastating 2010 earthquake, which included thousands of tons of food, medicines, the setting up of relief camps, mobile hospitals and medical personnel and relief workers. In addition, Chavez forgave Haiti’s $395 million debt, proclaiming that, “Haiti has no debt with Venezuela — on the contrary, it is Venezuela that has a historic debt with Haiti,” due to the fact that it was the newly self-freed Black republic that had given Simón Bolívar arms, ammunition and ships to fight the Spanish in Venezuela, with the promise in return that he would end slavery in his homeland. Venezuela has also forged new ties with African nations by opening 18 new embassies and establishing cooperative health and education agreements.

It is precisely because of the Venezuelan government’s audacity to stand up against racist US imperialism — and to unapologetically assert that Black lives matter by empowering poor people of African descent — that it is under constant assault from the white US ruling class and the international corporate media. Thus, it is quite easy to see why, to quote the slain Black radical Prime Minister of Grenada, Maurice Bishop, “Goliath has turned his full attention to David.”

Andrew King is a public policy doctoral student at UMass Boston, an activist-scholar, and has supported Black Lives Matter organizing and other racial and economic justice campaigns. He is the coordinator for a community-based research project with Boston youth organizers fighting for educational justice. Andrew has also done solidarity organizing with and research on Latin American social movements and has traveled to Venezuela and Cuba. He can be reached at [email protected].