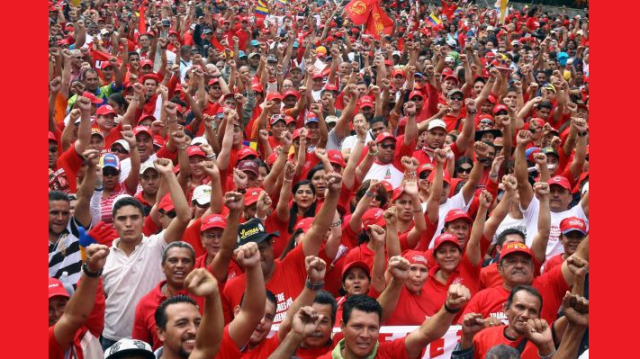 Aside from the systematic propaganda led by the media against the Venezuelan government, we should be watching the opposition, who have held the legislative power for a year while calling on the armed forces to intervene, accusing the President of breaching the Constitution and announcing his dismissal. Similarities can be drawn with the Chilean National Assembly during the months preceding the Allende coup, as the opposition’s programme seems unfitting for self-proclaimed advocates of democracy.

Winners and losers of the economic crisis

Contrary to their electoral pledges in December 2015, the Venezuelan opposition have done nothing to “end the queues”. (1) Since then, they haven’t considered it appropriate to support the government’s initiatives in its economic battles. Instead, the opposition, supported by the media, have multiplied their calls for help to the world, denouncing the foul management of the economic crisis by Maduro government and blaming it for all the evils.

The dominant narrative offers a one-sided reading, i.e. that the Bolivarian government bears full responsibility for the crisis. The way events are unfolding would lead to think that the conservatives have only just realised that Venezuelan government revenues have always been heavily dependent on oil prices. “What would this oligarchy do if it were to manage the country with oil at $ 24 a barrel?” – asked President Maduro to his opponents, who are “emboldened and intoxicated by their power”. (2)

To make matters worse, the economy has not been diversified as it should, and most items are still imported. This has allowed the oligarchy to hoard commodities and speculate on their prices. Let’s not forget that the Chilean oligarchy caused shortages in order to sow discontent among the population and pave the way for the putschists.

Denying that an economic war is being waged is a long-standing political strategy. A recent poll shows that 66% of Venezuelans believe that “the opposition is talking only about toppling Maduro, but haven’t presented a plan to solve the current economic woes.” And the same poll also indicates that 68% of Venezuelans “would agree for the opposition to help President Maduro resolve the country’s problems”. (3)

Invited on numerous occasions by the government, the opposition was obliged to participate in the talks supported by UNASUR, the Vatican and personalities such as the former Spanish President Rodriguez Zapatero. In one of these discussions, they said they wanted to “work together on economic and social issues, fighting any form of sabotage, boycott or aggression to the Venezuelan economy”. (4) As the saying goes, better late than never.

But by refusing to continue attending the talks, the right-wing have missed a historic opportunity to offer a constructive stance and to support initiatives to defend the most disadvantaged sectors. (5) Amid countless difficulties, the Bolivarian Revolution has continued implementing its ambitious social programme, notably in the health and housing sectors with the Barrio Adentro and Vivienda missions.

To confront economic war waged among oligopolies such as Polar, the government has managed to consolidate the “Local Provision and Production Committees” (CLAP) as an immediate solution to the crisis. In 2016 food distribution reached an average of 30,000 tons per week handed out by 21,000 committees deployed nationwide.

In 2017, this amount will be raised to 41,000 tonnes per week. (6) On 8 January, President Nicolas Maduro also announced a 50% increase in the minimum wage and pensions. With a card that entitles people to a “socialist basket”, workers will see their their purchasing power increased to a legal minimum of 100,000 bolivares.

By carefully concealing this information, the media continue to nurture the image of a failed state to justify foreign intervention or a coup. The form may vary, but the goal is the same: demonise, then topple Maduro. Since 2013, when the people entrusted him with the task of continuing the Comandante Eterno’s work, opportunities have been rife. Resisting the putschists has become a government speciality.

The tactics of calling on the armed forces, accusing the President of breaching the Constitution and announcing his imminent dismissal only serve to align the opposition to the Chilean National Assembly during the months leading up to the coup against Allende. Calls to take to the streets and “seize the palace of Miraflores”, have been deflated systematically since the operation La Salida (“The Exit”). (7)

On the other hand, last year’s requests for aid from abroad have received the support of OAS Secretary Luis Almagro, who threatened to trigger the mechanisms contained in the “democratic charter”. Almagro has simply followed the avenue taken by Obama, who reiterated last year’s decree that Venezuela poses “an unusual and extraordinary threat to the security of the United States.”(8)

Clearly, this executive order amounts to a licence to interfere wherever the first military power in the world invokes a so-called threat. Meanwhile, the government called on the opposition to continue the talks. And they have continued to mobilize the people against looming threats by staging events such as the anti-imperialist March on 17 December. The recent announcement of an agreement between Colombia and NATO is making this threat ever more real.

The international media campaign against Venezuela has the merit of revealing one thing: the opposition have no intention of fighting poverty or inequality. In fact, they are eager to return to the years of neo-liberalism, when the social-democratic parties worked alongside the IMF to dismantle the state and spread misery among the people. As time goes by, the opposition are increasingly falling into disrepute. By denying the advances of the Revolution, the anti-Chavista rhetoric proves powerless in the face of the new Bolivarian wave.

But we must be cautious: the media’s ability to produce collective amnesia should not be underestimated. To those who under the pressure of the anti-Maduro discourse prefer to look the other way or believe that the putschist opposition is still on the good side of history, the people of our America reply: “Allende presente, ahora y siempre! Chavez vive, la lucha sigue!”