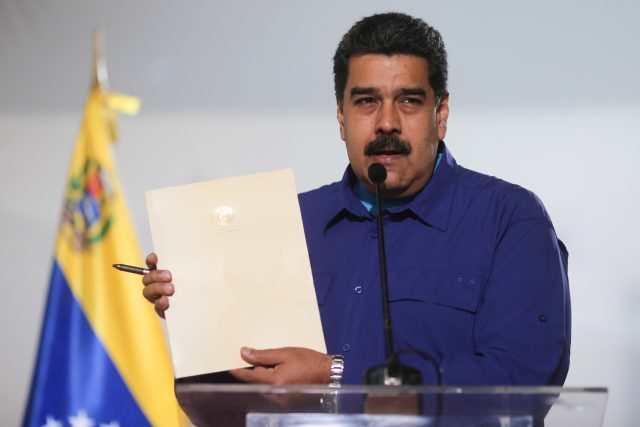 Government spokesman Jorge Rodriguez said that, on the eve of the scheduled signing, the opposition received a phone call from Colombia and decided to withdraw from the dialogue.

In a new but not unusual turn of events, Venezuela’s opposition Democratic Unity Table (MUD) has refused to sign an agreement with the government of President Nicolas Maduro, despite concurring on the majority of issues.

The suspension of the dialogue aimed at promoting peace and unity between the two parties was announced Wednesday by Dominican Republic President Danilo Medina, who stated the talks had entered “an indefinite recess.”

The opposition said they “did not understand” that the document was due to be signed on Tuesday. As Medina explained, “For the Venezuelan government, Tuesday’s visit was for the sole purpose of signing a definitive agreement and they came to sign that agreement.

“The opposition did not understand that it was obliged to sign this agreement and asked for time to evaluate the document, which contained the written accord of the whole progress of the meetings.”

Maduro, meanwhile, has vowed “that he will only sign the document signed by both parties” at the talks. The president has also expressed “the desire to continue dialogue and has even said he is willing to apply all agreements contained in this document, even without the opposition’s signature,” Medina said.

MUD spokesman Julio Borges, however, says that his opposition coalition brought to the talks a detailed briefing on how to achieve “the most important thing in the short-term in Venezuela, which is the possibility to have free and fair elections where all Venezuelans have the ability to decide their future.”

In his statement, Borges appeared to deflect responsibility onto factors beyond the negotiating table: “We call on the Venezuelan people to create a wide front among all and for all, inside and outside of Venezuela, to materialize this struggle and achive a solution  in the name of the entire Venezuelan people.”

His words could be interpreted as calling into question whether the MUD coalition will have an executive role in the final consummation of the agreement.

Government spokesman Jorge Rodriguez said that, on the eve of the scheduled signing, the opposition received a phone call from Colombia and promptly decided to withdraw from the dialogue.

The document presented by the MUD coalition so late in the proceedings, at which point further debate was all but impossible, reportedly bore little resemblance to “the one presented by the ruling party.”

According to Medina, on January 31 both delegations met in Caracas to reconcile the points that were still pending: “basically, the fixation of the date of the elections.” The meeting was mediated by former Spanish Prime Minister Jose Luis Rodríguez Zapatero.

Medina specified that the meeting “had to do with the empowerment of political parties and the freedom of detainees,” and on both issues an agreement was reached. On the date of the presidential elections, the opposition proposed June 10 and the Venezuelan government March 8. A compromise was sought and “agreement was reached that the elections would be on April 22.”

On February 7, after it was announced the dialogue had been suspended, Zapatero affirmed that the issues of electoral guarantees, international observation and the date of presidential elections had essentially been agreed, but the opposition was refusing to acknolwedge the fact.

At the same time, however, Zapatero also said that any “alternative” to the dialogue would be “extraordinarily negative.” He then called for both parties to reconsider the circumstances: a direct allusion to the Venezuelan right.

Zapatero went on to say that he reserved the power to testify before the media and was doing so on this occasion because it was a “really difficult” moment. He called on the opposition to reconsider their position, pointing out that their comments fell within the framnework of what had already been agreed, and saying of himself: “I have been an essential witness.”

Following the February 7 statements, Borges’ comments were denied by mediators and observers present at the dialogue. As a result, it could be argued that the position of the MUD coalition was both misplaced and incongruous – to the point of embarrassing international observers. But why would the MUD take such political risks, and what prompted its erratic position?

First, we must consider that the MUD doesn’t necessarily represent its own interests. On the contrary, it acts as a vassal of other powers outside Venezuela, which severely limits the self-determination these political leaders might have if the context was different. This is no minor issue.

The anti-Chavismo agenda is driven by the United States and its State Department in the form of Rex Tillerson, an oil tycoon interested in the recapture of ExxonMobil from Venezuelan resources. In the Senate, Marco Rubio has openly rejected the Venezuelan dialogue.

Meanwhile, the White House – following the dangerous and uncontrolled foreign policy of the Trump administration – is still shuffling new economic sanctions against Venezuela, such as a probable oil embargo, ignoring any possible agreements between the two parties.

A phone call to Borges from Colombia, and other issues – such as the creation of a “humanitarian border corridor on the border” by Colombian President Juan Manuel Santos; an oil embargo; a proposal sponsored by Mauricio Macri and the role of Pedro Pablo Kuzynski articulating the Lima Group as a forum for international pressure – are all connected. Tillerson’s Latin America tour, meanwhile, is intended to communicate to satellite countries a determined plan against Venezuela.

Maduro’s proposal to put into motion the concessions provided in the dialogue, even without the opposition signature, presents a very specific set of scenarios to the anti-Chavismo element.

The Venezuelan government is determined to go to elections, against whoever, in whatever conditions. When the opposition contradicts itself in speeches regarding whether it will participate, it reveals the interventionist foreign pressures under which it is operating.

Hours after the talks’ indefinite suspension, the National Electoral Council of Venezuela (CNE) called the presidential elections according to the date agreed with the MUD during the dialogue. Tibisay Lucena, head of the electoral body, announced the elections would be held on April 22: a clear reference not only to the dialogue that the MUD intends to ignore, but also to the seriousness with which the Venezuelan insitutions are pursuing progress.

This announcement serves to reignite previously dormant arguments. The parties most prone to intervention want to deny the MUD any opportunity to take part in the elections, but first they need a good excuse.

On the other hand, there are those who recognize that this is a challenging moment for the oppostion leadership and assume that – even if the election is free and fair – the results will weaken their position, legitizimizing both the National Constituent Assembly and the Venezuelan institutions, while ending in the opposition’s defeat despite its international portrayal as an electoral majority.

Indeed, if the opposition refuses to accept the options they themselves helped create within the framework of the dialogue, the government will go to the election and unseat the anti-Chavismo elements, seizing complete control of the political board. That, in turn, will prompt a resurgence of the interventionism and sanctions that affect the Venezuelan economy.

The gravity of the opposition’s incongruent position is that it is rooted in obedience to exernal parties imposing their own agenda: a clear interventionist plot that poses a dangerous threat to the Bolivarian Republic. It also implies they have been relegated by their own actions – and by orders from above –  to a new presidential election, this time absolute.

The possibility of the MUD withdrawing from the electoral process signals, of course, a new cycle of political destabilization that foreign anti-Chavismo forces in the highest instances will be surely fostering.

Venezuela: Revenge of the Mad-Dog Empire