Venezuela Building Socialism in the Midst of a War : Report from the Left Forum 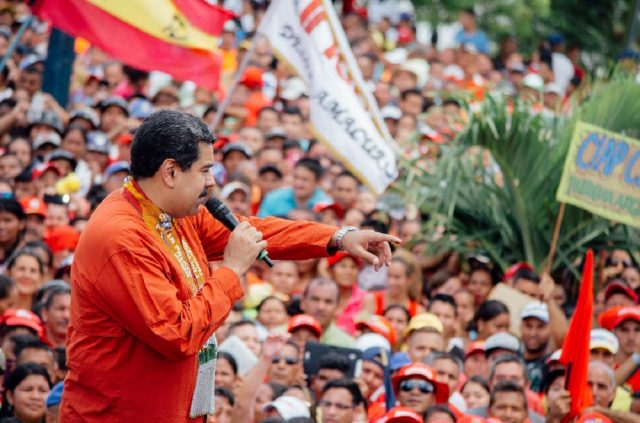 “The road to socialism is not a flat road. It is a road with many obstacles. But the direction of our government has been clearly towards socialism. The Venezuelan constitution has shown the way. It is not easy to make a revolution the democratic way in the context of globalization and international warfare” from the U.S.

“Venezuela,” Daniela Rodríguez explained, “is building socialism in the midst of a war.”  According to Rodríguez, “the U.S. is using new tools of warfare trying to subjugate, dominate, and push back socialism not only in Venezuela but in any part of the world.” Nevertheless, she added, “we are learning new ways to defend humanity.”

A youth member of the United Socialist Party of Venezuela, Rodríguez was only nine years old when Hugo Chávez was elected president of Venezuela in 1998 and initiated the Bolivarian Revolution. Based on her activism, this millennial explained to a mostly seasoned audience at the Left Forum in Brooklyn, New York, on June 29: “The road to socialism is not a flat road. It is a road with many obstacles. But the direction of our government has been clearly towards socialism. The Venezuelan constitution has shown the way. It is not easy to make a revolution the democratic way in the context of globalization and international warfare” from the U.S.

Rodríguez had been invited as a special guest to a panel of activists reporting back on their solidarity delegation to Venezuela last March.

Joe Lombardo recounted that what their delegation to Venezuela saw was the opposite of what was being reported in the U.S. corporate press. Lombardo is co-coordinator of the United National Anti-war Coalition (UNAC). He twice tried to attend announced opposition rallies in Caracas, which didn’t materialize. In fact, the government had dispatched police to protect the opposition supporters had they assembled because, for most Venezuelans, the U.S.-backed far-right opposition was profoundly unpopular. Meanwhile, the delegation witnessed huge demonstrations mobilizing in defense of the government.

Delegation organizer Bahman Azad of the U.S. Peace Council described how the U.S. is promoting wars all over the world. With its unparalleled power, the U.S. can use hybrid warfare techniques such as unilateral coercive economic measures to rain misery upon the population of any country that shows independence from the U.S.-imposed world order. The U.S. is currently unilaterally sanctioning not only Venezuela but also some 30 other countries. The increasing danger of major power confrontation and consequently of world war urgently calls for building a unified movement against militarism, because only a peace movement within the U.S. can overcome this war mongering.

Azad reflected that societies like Venezuela cannot transmute from capitalist to socialist overnight but must transform over time. Azad, citing Lenin, explained that a revolutionary vanguard must lead, but only by a single step lest it get too detached from the people and become right in essence

Another delegate, Sara Flounders, with the International Action Center noted that it is not for North Americans to tell the Venezuelans that they are not socialist enough. Instead of academic criticisms that Venezuela has not nationalized enough private property, we should understand that right now the U.S. government is preventing the Venezuelan-owned CITGO company in the U.S. from repatriating profits, which would be used to provide needed food and medicines to the Venezuelan people.

William Camacaro, of the Alberto Lovera Bolivarian Circle, resides in the U.S. and recently led a delegation to his native Venezuela. To say that the Venezuelan government of Nicolás Maduro does not need to be defended from the U.S. regime-change project because it has not overthrown its bourgeoisie is, according to Camacaro, to implicitly support the U.S.-backed coup effort.

Kevin Zeese, co-director of Popular Resistance and another delegate, further explained that the Venezuelan revolution for socialism is best understood as a “process.”

Zeese is part of the Embassy Protection Collective, which defended the Venezuelan Embassy in Washington, DC at the invitation of the Venezuelan government after the Venezuelan embassy staff left the U.S. For 37 days they prevented the embassy from being occupied by representatives of the unelected Juan Guaidó who is the U.S.-anointed and self-proclaimed interim president of Venezuela.

Zeese along with Margaret Flowers, also a co-director of Popular Resistance and attending the panel, plus two other Embassy Protectors were ultimately arrested by the U.S. government and now face possible high fines and imprisonment. A defense committee has been formed (https://DefendEmbassyProtectors.org/) and is soliciting donations to help defray legal fees and doing educational work to help build a national consensus against the ongoing coup attempt in Venezuela by the U.S. A demonstration is called for at Herald Square in Manhattan with a march to the UN on September 22.

Rodríguez expressed her great gratitude for the courage of the Embassy Protectors defending both the Venezuelan embassy and, she added, international law. The Venezuelan people see them, she explained, as true heroes and inspirations.

An Ecuadorian attending the panel called Venezuela “the light for Latin America,” because of its internationalist commitment to helping people. He thanked the Maduro government of Venezuela, which was the first to send millions of dollars of relief aid when Ecuador had a disastrous earthquake.

Rodríguez concluded about the historical struggle against imperialism and for humanity. “I am just a worker,” she explained. “I believe in something – the need to promote solidarity. We need to feel solidarity with suffering in any part of the world. The Empire doesn’t respect international law. The United Nations is being attacked by the very nation that hosts it.” She lamented the terrible misery in Venezuela happening now due to the U.S. regime-change project, closing that “justice shall prevail.”

Roger D. Harris is with the Task Force on the Americas (http://taskforceamericas.org/), a 33-year-old human rights organization, and is active with the Campaign to End U.S.-Canadian Sanctions Against Venezuela (https://tinyurl.com/yd4ptxkx).

Venezuela’s Bolivarian Revolution in the Crosshairs of US Imperialism