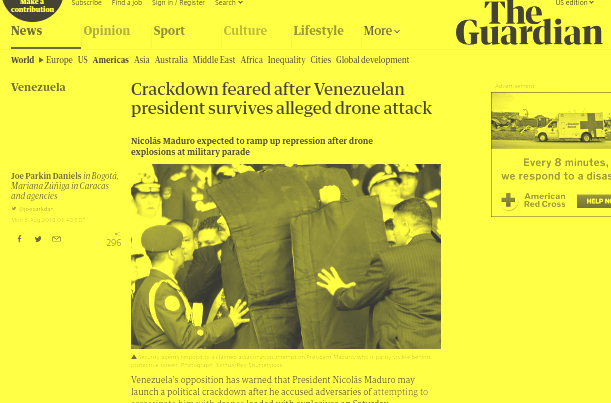 Venezuela was rocked this past Saturday by an attempted assassination of President Nicolás Maduro, during a public event, using drones armed with explosives. But as more details started to become available, the coverage of the mainstream media actually moved in the opposite direction: one after the other they have looked to sow doubt on the events, using words such as “apparent” or “alleged”, focusing instead on the government using this “alleged” event to step up repression. In the end, it is hard to tell apart the media coverage from the statements of John Bolton, one of the more hawkish advisers to the US president.

Although there are plenty of examples to choose from, we are going to focus on our personal champion of dishonest Venezuelan coverage – The Guardian. A quick search of Guardian headlines with “assassination attempt” shows that a qualifier such as “alleged” is never used. Be it Jacques Chirac, Guinea’s president, or even Saddam Hussein’s deputy, nobody had their assassination attempts questioned as a hoax to be used as a pretext to stamp out dissent. Such is the dishonesty of the media coverage of Venezuela. (1)

Yet this is the Guardian’s opening paragraph:

“Venezuela’s opposition has warned that President Nicolás Maduro may launch a political crackdown after he accused adversaries of attempting to assassinate him with drones loaded with explosives on Saturday.”

Remarkably, it is the Venezuelan opposition takes precedence in an article describing an assassination attempt against Maduro. This would be akin to a report on 9/11 opening with “Al-Qaeda warns of increased US involvement in the Middle East.” Then there is the usual trick of encapsulating the events under “Maduro said”, so that all the previous work smearing Maduro can be used to discredit this version.

Several videos and testimonies, some even mentioned by the Guardian piece, corroborate the Venezuelan government’s version of events. Two drones armed with explosives targeted the stage where Maduro was giving a speech on the 81st anniversary of the National Guard. One of them, because of signal jammers, crashed in front of a nearby building. Residents testified to this, and some of them captured the events, thus demolishing the nonsensical thesis that the explosion had been due to a gas leak.

The second drone detonated closer to the stage, resulting in seven injured officers while bodyguards quickly moved to shield Maduro. Despite all this evidence The Guardian insists that “exactly what happened still remained unclear on Sunday”. Perhaps Maduro, his wife and everyone around them looked at the sky at the same time and soldiers in formation scattered as part of some devious coordinated plan to ramp up repression. We are before the Caribbean version of 9/11 Truthers.

The Venezuelan opposition, in their newly-minted Frente Amplio coalition, which is sure to have its fingerprints all over this, can count on The Guardian as a megaphone to accuse the government of “making “irresponsible” accusations without any proof” and preemptively denounce upcoming repression. Nevermind the fact that opposition leaders have repeatedlybeen involved in violent attempts to overthrow the government. Also, just a few tweets later, one of the parties in the Frente Amplio, Primero Justicia, threatened Maduro with actions “like this one or worse”.

Following that we are told that “No one has claimed responsibility for the alleged assassination attempt”, although the group Soldados de Franelas, whose members are unknown, claimed this attempt as a victory, and later published a statement on a so-called Operation Fenix, read by notorious anti-government journalist Patricia Poleo in Miami (2). The statement affirms that it is the duty of the armed forces to remove the current government which, among other things, is guilty of indoctrinating children with communism!

The Guardian then continues to find other victims, since they are not sure the assassination attempt took place, and mentions six people arrested, two of them having previously taken part in “street protests”. According to interior minister Nestor Reverol, one of those detained had been involved in the 2014 guarimbas, which were a little more than “street protests”. They involved violent barricades, shooting at bystanders, beheading motorcyclists, and a great deal more. He had been released by the government in a (clearly futile) gesture of goodwill. The second one was sought after an attack on the Paramacay barracks last year, and we can all agree that calling this a “street protest” is a bit of a stretch, even for The Guardian.

Then we are treated to two paragraphs replete with distortions. There is a mention of the economic crisis, which is fair enough but referring to an IMF prediction which is utter nonsense. Next we read that Maduro “replaced” Chávez (he was elected), that he repressed anti-government demonstrations left 100 dead (opposition violence was responsible for a large part of the casualties), and that he sidelined the opposition-led congress (they are in contempt of court) by installing (there were elections, 8M+ voted) a body stacked with loyalists (again, there were elections and 6.120 candidates ran for 545 seats).

To top it all off, there is a mention of last year’s terrorist attack by Óscar Pérez, who hijacked a helicopter and went on to throw grenades and open fire on public buildings full of people . It is priceless that The Guardian should bring this up, because back then it also ran with ludicrous theoriesthat it might have been all a government stunt, and then had a great deal of fun looking at Pérez’s Instagram page and his past acting activities. Pérez’s repeated calls for a coup and his appearance in an anti-government protest days later were not enough for The Guardian to clarify that he actually was an anti-government terrorist. (3)

The icing on this cake of dishonesty is that Pérez was “hunted down and killed”, when even the Guardian hyperlink has the word “shootout”. Pérez and his group were surrounded by security forces, and there were videos showing him urging the soldiers to join his rebellion, while the commanding officer tried to get him to surrender. After Pérez allegedly refused, a shootout ensued in which two policemen of the FAES special forces were killed, which is not exactly the picture suggested by “hunted down and killed”.

All in all, it seems like the US Empire, its allies and the stenographers in the mainstream media are trying to play a game in which they never lose. They constantly call for a coup, even report on foiled attempts, (4) but when something actually takes place, the reaction is along the lines of “the US/Colombia/Venezuelan opposition had nothing to do with this coup/assassination attempt which maybe did not even happen”. Had it succeeded, as the 2002 coup did briefly, they would be celebrating “a victory for freedom”. Since it failed, it was all in the dictator’s imagination! But the crackdown is certain, which will then justify people wanting to kill Maduro or attempt a coup, and the cycle starts again.

The reactionary plotting against the Bolivarian Revolution by the Venezuelan bourgeoisie, their northern masters and the latter’s regional puppets, only now and then materialises into actual operations or terrorist attacks. But there is a constant set of background assumptions being created to endorse and provide cover for these actions, and this is achieved through the western media’s systematically dishonest coverage of Venezuela.

(1) This is in stark contrast to two recent episodes. An anti-Assad filmmaker and an anti-Putin journalist faked an assassination attempt and their own death, respectively. Both were immediately reported as absolute certainties, even though the details were fishy, only to be revealed within hours to be publicity stunts.

(2) Patricia Poleo has been formally accused of being involved in the assassination of Danilo Anderson in 2004. Like Posada Carriles and plenty of other terrorists, she found safe haven in Miami.

(3) Pérez was aboard the loony train that claims that the Cubans are running the show in Venezuela. Patricia Poleo’s statement also hinted at this, and opposition leaders have also run with this time and again. Yet this gets filtered out because these characters need to remain credible.

(4) Donald Trump has gone so far as to raise the possibility of a US invasion, repeatedly, in public.

Cover photo: Screenshot of the Guardian