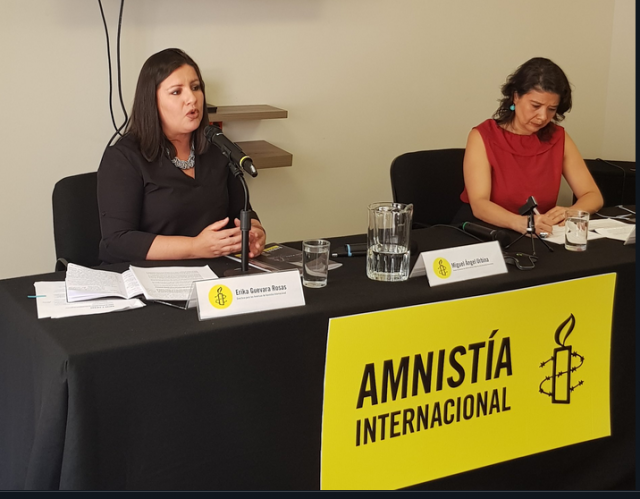 Uncle Sam has a problem in his South American “backyard” with those uppity Venezuelans who insisted on democratically electing Nicolás Maduro as their president instead of by-passing the electoral process and installing the unelected US asset Juan Guaidó. No matter, Amnesty International has come to the rescue with a full-throated defense of US imperialism.

“Faced with grave human rights violations, shortages of medicines and food and generalized violence in Venezuela, there is an urgent hunger for justice. The crimes against humanity probably committed by the authorities must not go unpunished.”

Amnesty International fails in its broadside to put its claims against the Maduro government in the context of a concerted regime-change campaign, which amounts to war, by the bully from the north. The US is waging an illegal war against Venezuela and Amnesty International’s broadside leaves out this inconvenient fact, egregiously even omitting any mention of sanctions.

As human rights activist Chuck Kaufman of the Alliance for Global Justice noted about Amnesty International (AI): “They don’t seem to even care about their credibility anymore.” A more credible and honest account of what is unfolding in Venezuela, than the hatchet job presented in AI’s May 14th Venezuela: Crimes against humanity require a vigorous response from the international justice system, would have also noted along with the alleged transgressions of the Maduro government:

How is it possible that an organization purporting to stand for human rights and global justice can so blithely ignore facts that do not fit into their narrative and so obsequiously parrot the Trump-Pompeo-Bolton-Abrams talking points? Why would AI go so far as to meet with the self-appointed Guaidó and then within days issue a report condemning the Maduro government, without also investigating the other side in the conflict?

Unfortunately, this is not the first time AI has shown an imperial bias as it has regarding US-backed regime-change projects in Iraq, Libya, Syria, and Nicaragua.

Objectively deconstructing the many allegations (e.g., “more than 8,000 extrajudicial executions by the security forces”) made against Venezuela in the AI broadside and its accompanying report remains to be done. Unfortunately, the Empire has a surfeit of resources to churn out propaganda compared to the ability to counter it by genuine humanitarian groups. AI alone has an annual budget of over $300 million. According to sources cited by Wikipedia, AI receives grants from the US State Department, the European Commission, and other governments along with the Rockefeller Foundation.

To conclude, AI’s broadside calls for justice about as often as it calls for punishment with the subtext that punishment of the Empire’s victims is justice. Were AI truly concerned about justice, rather than justifying another US regime-change operation, they would champion the following:

Roger Harris is with the Task Force on the Americas (http://taskforceamericas.org/), a 33-year-old human rights organization, and is active with the Campaign to End US-Canadian Sanctions Against Venezuela (https://tinyurl.com/yd4ptxkx).

Camilo Mejia and Paul Baker Hernandez : The Duo activist with resilient and out-spoken voices for Nicaragua