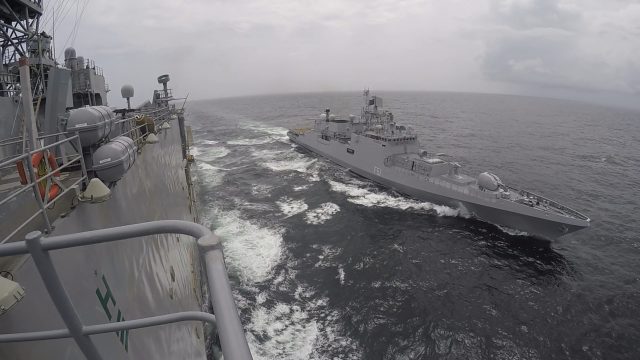 Lasanda Kurukulasuriya writes about the mounting tensions in the Indian ocean and the US stepping up its defence ties in India to counter rising Chinese influence.

US Secretary of State Rex Tillerson’s speech in Washington on Wednesday (18) where he named China as the cause for the US’s intensified interest in the Indian Ocean, and as the reason for its deepening defence ties with India, has brought the big-power contestation in the region to a new level. While analysts have long referred to the US’s ‘rebalance’ (or ‘pivot’) to Asia as being motivated by its need to counter the economic and military rise of China, US officials have not been quite so blunt about it in their utterances so far. China was an underlying, hidden factor in these discussions. But now the gloves are off, it appears. Speaking at the Centre for Strategic and International Studies (CSIS) in Washington DC, Tillerson said:

“China, while rising alongside India, has done so less responsibly, at times undermining the international, rules-based order even as countries like India operate within a framework that protects other nations’ sovereignty. China’s provocative actions in the South China Sea directly challenge the international law and norms that the United States and India both stand for. The United States seeks constructive relations with China, but we will not shrink from China’s challenges to the rules-based order and where China subverts the sovereignty of neighboring countries and disadvantages the U.S. and our friends.”

In August last year the US and India signed a Logistics Exchange Memorandum of Agreement (LEMOA), one of the four foundational agreements that the US enters into with its defence partners, and in December the US designated India as a ‘major defence partner.’ Reports say it is now set to supply India with 22 Sea Guardian drones for surveillance in the Indian Ocean. According to some analysts the US would like India to jointly take responsibility to patrol the Asia-Pacific region. “Together with Japan and East Asian nations, Washington would want India to throw its weight behind patrolling the Pacific Ocean where the Chinese navy is becoming more and more aggressive in staking its claims” says Seema Guha, writing in ‘India Legal.’

Tillerson’s rationale for stronger US military collaboration with India was expressed in terms of a need to “ensure that the Indo-Pacific is increasingly a place of peace, stability, and growing prosperity – so that it does not become a region of disorder, conflict, and predatory economics.” But whether ‘peace, stability and prosperity’ etc will be advanced by the ‘Us against Them’ attitude adopted by the US, ‘ganging up’ with India to counter the other rising Asian giant , remains a question.

The ‘challenges to international law’ that Tillerson mentions would refer to China’s actions in the disputed waters of the South China Sea, where China’s claims are contested by neighbouring states (Vietnam, Philippines, Malaysia, Brunei). Commander of the US Pacific Fleet Admiral Scott Swift recently made reference to this issue, though obliquely, at the Galle Dialogue 2017, an international maritime conference hosted annually by Sri Lanka.

The ‘international laws and norms’ invoked by the US in support of a ‘rules based’ maritime order would refer to the UN Convention on the Law of the Sea (LOS), to which the US is itself not a signatory although it constantly calls upon others to comply. Adm. Swift in his presentation made indirect reference to China’s rejection of a ruling by an international tribunal constituted under the LOS Convention, which backed the Philippines’ case in a dispute relating to the South China Sea. He compared China’s behaviour with that of India which, in a maritime boundary dispute with Bangladesh, accepted the tribunal’s ruling. “Just as nations and their maritime forces have the ability to build trust, their actions, like applying national laws in international space, erodes any trust that can be gained by multi-lateral cooperation” he said. The question arises as to whether the US’s confrontational policy of carrying out what it calls Freedom of Navigation ‘Assertions’- by sailing its warships into the disputed areas of the South China Sea for example – will serve the interests of peace and stability it ostensibly seeks to promote.

The US adopts this approach in spite of China having demonstrated that it is becoming more open and ready to engage globally. China played a significant role in anti-piracy operations in the Gulf of Aden. It has made contributions to disaster relief (the 2011 earthquake in Japan for example, during which political tensions were buried in an overwhelmingly sympathetic response) and humanitarian relief operations (e.g. evacuating foreign nationals, including Sri Lankans, along with its own citizens from war-torn Yemen in 2015).

At the Galle Dialogue 2017 too, China signaled that its outlook was changing. “The Chinese PLA navy will positively implement a new model of maritime security concept and carry out exchanges with other navies in a more open and more responsible attitude to unswervingly safeguard maritime security and enhance marine prosperity” said Deputy Commander of the East Sea Fleet Rear Admiral Cui Yuzhong.

The US Secretary of State’s remarks at CSIS show that the US has chosen to disregard these signs that an evolving China is ready to make certain changes. The US has preferred to take the adversarial route.

In this entire equation, it would appear that Sri Lanka is strategically situated, both literally and figuratively speaking. But Sri Lanka’s officialdom has not displayed a response one would expect from a neutral player and a supposedly Non-Aligned nation. Instead of adopting a carefully calibrated approach which could have been formulated with the input of local international relations think tanks, its politicians unthinkingly use US-inspired rhetoric, including terms such as ‘Indo-Asia-Pacific,’ ‘freedom of navigation,’ ‘rules- based order’ etc. Though it is acknowledged that the Indian Ocean is relatively peaceful (compared to areas to its East and West) they speak of anticipated ‘threats’ that need to be met with enhanced military capabilities. This is all straight out of the US playbook. If Sri Lanka expects to maintain good relations, as it must, with all three – the US, China and India – taking a partisan route is unlikely to help.

Originally published in the Daily Mirror

The Killing of History