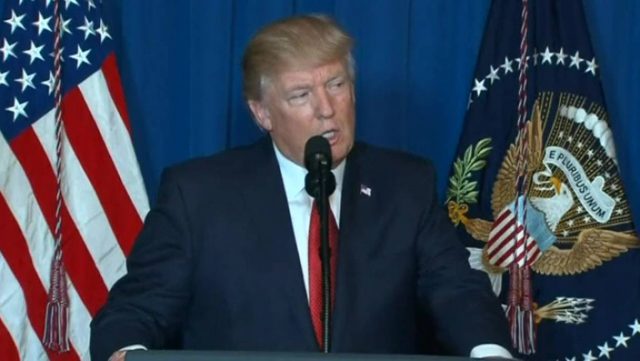 When we are bombarded with information about a “massacre”, which is then used to justify US bombings, it is always useful to recall the historical precedents. In 2013, the Syrian government had already been accused. But the official UN investigation (though heavily influenced by the USA) concluded that it was impossible to to attribute responsibility to either camp.

When we are bombarded with information about a “massacre”, which is then used to justify US bombings, it is always useful to recall the historical precedents.

In 2003, “weapons of mass destruction” had already been used as a pretext by George W. Bush to plunge Iraq into hell. At the time, we said: this is a fabrication, we do not believe it. Now everyone recognises it, but for the Iraqis it is too late.

In 2013, the Syrian government had already been accused. But the official UN investigation (though heavily influenced by the USA) concluded that it was impossible to to attribute responsibility to either camp.

In my books, I have exposed how every war is preceded by a great media propaganda campaign based on lies (Vietnam, Panama, Iraq, Yugoslavia, Palestine, Afghanistan, Libya, Syria, Côte d’Ivoire). It is a technique for stirring up public opinion, and rather than be manipulated we should think carefully.

2. Who has an interest in such a provocation?

Since I am not there, I do not pretend to know what happened. Besides, in such a case, NOBODY can claim any certainty. An impartial investigation, which would take some time, is required. I notice that yesterday, in the French magazine Challenges, the French military experts question the theory that of the Syrian army was responsible.

The first question to pose is: who has an interest in this? What is the current situation in Syria? Terrorist organisations are losing more and more ground. The al-Nusra front (now operating under a different name) had occupied several dozen localities around Hama, but the Syrian army counter-offensive had liberated 85% of the lost territory and was advancing towards the Nusra bases. At a moment when the battleground balance is very favourable, would the Syrian government be stupid enough to use these weapons, which are useless, and create this international outrage?

Whatever one thinks of the government in Damascus, one must always wonder: what are the interests of both sides at this moment? Is it not the currently struggling opposition who would see pin its hopes on an international intervention?

The United States had just decided that it was up to the Syrians to decide whether Assad should stay or not. The negotiations, blocked since 2011, were finally underway. Which forces had more to gain in sabotaging this negotiation? Whatever the media say, the Syrian president still retains the support of a large part of the population.

It should be noted that the Syrian base that was bombed was used mainly to target ISIS around Palmyra. What happened after the US bombing? ISIS went on the offensive against the Syrian army.

The Organisation for the Prohibition of Chemical Weapons (OPCW), which oversaw the destruction of the weapons stock declared by Damascus in September 2013, declared in January 2016 that the stock had been destroyed in full. Seymour Hersh, a renowned US journalist (Pulitzer Prize winner), had previously demonstrated that the rebels had been supplied with chemical weapons.

To get a good understanding, we must make a point of always listening to “the bad guys”. Damascus had informed the UN that a convoy of twelve trucks from Turkey had transported toxic substances to Idlib, but the UN did not investigate. Could that have been bombed by the Syrian army? Should not we have an investigation before we do something?

The facts arise when the US-Europe coalition is accused of killing more than seven hundred civilians in Mosul (Iraq) and Raqqa (Syria). Double Standard? A smokescreen? On March 17, the Syrians shot down an Israeli plane that violated Syrian airspace and supported the terrorists around Palmyra. Which media has investigated this case?

How do we understand these events? In 2013, Trump was opposed to bombing Syria. He repeated throughout his campaign that Washington should not get involved in conflicts of the Middle East. Election promises, you may say, all US presidents are known to make such promises, including George W. Bush!

However, 57% of the people in the United States said that they ought to interfere less in the affairs of other countries and focus more of their own problems. Trump felt he had to hit this note in order to be elected.

But now the US establishment is putting on enormous pressure to get him back on track and to join the warmongers. The weapons dealers rejoice and urge the European countries to double their military expenditure and sacrifice social expenditures. Nothing pays off like war!

This would lead to a major conflict with Russia and China. We live in an increasingly dangerous world. It is urgent to recreate an international anti-war movement. The starting point is examining information critically.

As we wrote in 2008, at the time of Obama’s arrival, the US foreign policy is not decided by a single man and the president is basically an employee. Stronger forces decide: powerful multinational corporations. Concerned with the decline of the United States, they are flexing their muscles. US strategists are divided, the campaign demonstrated this.

Increasingly dangerous, the world also becomes more complex. It is therefore necessary to analyse and reflect carefully on what is happening in the United States and where the world is going. This is the subject of Investig’Action’s next book of: Le Monde selon Trump, by Grégoire Lalieu and myself (in French). It will be released at the end of April. Stay tuned to our newsletter and social media pages for more.