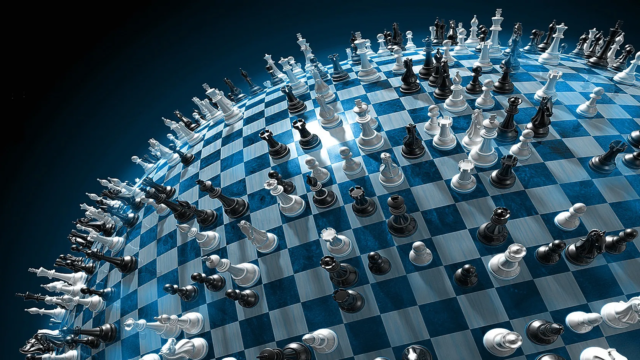 Zbigniew Brzezinski’s book “The Grand Chessboard” was published 25 years ago. His assumptions and strategies for maintaining U.S. global dominance have been hugely influential in US foreign policy. As the conflict in Ukraine evolves, with the potential of escalating into world war, we can see where this policy leads and how crucial it is to re-evaluate.

The need to dominate Eurasia

The basic premise of “The Grand Chessboard” is outlined in the introduction:
*with the collapse of the Soviet Union, the United States is the sole global power
* Europe and Asia (Eurasia) together have the largest land area, population and economy
* U.S. must control Eurasia and prevent another country from challenging US dominance

Brzezinski sums up the situation: “America is now the only global superpower, and Eurasia is the globe’s central arena.” He adds “It is imperative that no Eurasian challenger emerges, capable of dominating Eurasia and thus of challenging America.”

The book surveys the different nations in Eurasia, from Japan in the east to the UK in the west. The entire land mass of Europe and Asia is covered. This is the “grand chessboard” and Brzezinski analyzes how the US should “play” different pieces on the board to keep potential rivals down and the US in control.

Brzezinski was a very powerful National Security Advisor to President Carter. Before that, he founded the Trilateral Commission. Later he taught Madeline Albright and many other key figures in US foreign policy.

Brzezinski initiated the “Afghanistan Trap”. That was the secret 1979 US program to mobilize and support mujahedin foreign fighters to invade and destabilize Afghanistan. In this period, Afghanistan was undergoing dramatic positive changes. As described by Canadian academic John Ryan, “Afghanistan once had a progressive secular government, with broad popular support. It had enacted progressive reforms and gave equal rights to women.”

The Brzezinski plan was to utilize reactionary local forces and foreign fighters to create enough mayhem that the government would ask the neighboring Soviet Union to send military support. The overall goal was to “bog down the Soviet army” and “give them their own Vietnam”.

With enormous funding from the US and Saudi Arabia beginning in 1978, the plan resulted in chaos, starvation and bloodshed in Afghanistan which continues to today. Approximately 6 million Afghans became refugees fleeing the chaos and war.

Years later, when interviewed about this policy, Brzezinski was proud and explicit: “We didn’t push the Russians to intervene, but we knowingly increased the probability that they would.” When asked if he had regrets for the decades of mayhem in Afghanistan, he was clear: “Regret what? That secret operation was an excellent idea. It had the effect of drawing the Russians into the Afghan trap and you want me to regret it? …. Moscow had to carry on a war that was unsustainable for the regime, a conflict that brought about the demoralization and finally the breakup of the Soviet empire…. What is more important in world history? The Taliban or the collapse of the Soviet empire? Some agitated Muslims or the liberation of central Europe and the end of the Cold War?”

Afghanistan was a pawn in the US campaign against the Soviet Union. The amorality of US foreign policy is clear and consistent, from the destruction of Afghanistan beginning in 1978 continuing to the current starvation caused by US freezing of Afghan government reserves.

The blow-back is also clear. The foreign fighters trained by the US and Saudis became Al Qaeda and then ISIS. The 2016 Orlando nightclub massacre, where49 died and 53 were wounded was perpetrated by the son of an Afghan refugee who never would have come to the US if his country had not been intentionally destabilized. Paul Fitzgerald eloquently describes the tragedy in his article Brzezinski’s vision to lure Soviets into Afghan Trap now Orlando’s nightmare.

US Supremacy and Exceptionalism

The “Grand Chessboard” assumes US supremacy and exceptionalism and adds the strategy for implementing and enforcing this “primacy” on the biggest and most important arena: Eurasia.
Brzezinski does not countenance a multi-polar world. “A world without US primacy will be a world with more violence and disorder and less democracy and economic growth ….” and “The only real alternative to American global leadership in the foreseeable future is international anarchy.”

These assertions continue today as the US foreign policy establishment repeatedly talks about the “rules based order” and “international community”, ignoring the fact that the West is a small fraction of humanity. Toward the end of his book, Brzezinski suggests the “upgrading” the United Nations and a “new distribution of responsibilities and privileges” that take into account the “changed realities of global power.”

The importance of NATO and Ukraine

With the dissolution of the Soviet Union and Warsaw Pact, many people in the West believed NATO was no longer needed. NATO claimed to be strictly a defensive alliance and its only rival had disbanded.
Brzezinski and other US hawks saw that NATO could be used to expand US hegemony and keep weapons purchases flowing. Thus he wrote that, “an enlarged NATO will serve well both the short-term and the longer-term goals of U.S. policy.”

Brzezinski was adamant that Russian concerns or fears should be dismissed. “Any accommodation with Russia on the issue of NATO enlargement should not entail an outcome that has the effect of making Russia a de facto decision making member of the alliance.” Brzezinski was skillful at presenting an aggressive and offensive policy in the best light.

Brzezinski presents Ukraine as the pivotal country for containing Russia. He says, “Ukraine is the critical state, insofar as Russia’s future evolution is concerned.” He says, “Without Ukraine, Russia ceases to be a Eurasian empire.” This is another example of his skillful wording because Ukraine as part of a hostile military alliance does not only prevent a Russian “empire”; it presents a potential threat. Kyiv is less than 500 miles from Moscow and Ukraine was a major route of the Nazi invasion.

Brzezinski was well aware of the controversial nature of Ukraine’s borders. On page 104 he gives a quote that shows many people of eastern Ukraine wanted out of Ukraine since the breakup of the Soviet Union. The 1996 quote from a Moscow newspaper reports, “In the foreseeable future events in eastern Ukraine confront Russia with a very difficult problem. Mass manifestations of discontent … will be accompanied by appeals to Russia, or even demands, to take over the region.”

Despite this reality, Brzezinski is dismissive of Russian rights and complaints. He bluntly says, “ Europe is America’s essential geopolitical bridgehead on the Eurasian continent.” and “Western Europe and increasingly Central Europe remain largely an American protectorate.” The unstated assumption is that the US has every right to dominate Eurasia from afar.

Brzezinski advises Russia to decentralize with the free market and a loose confederation of “European Russia, a Siberian Russia and a Far Eastern Republic”.

Afghanistan is the model

Brzezinski realizes that Russia presents a potential challenge to US domination of Eurasia, especially if it allies with China. In the “Grand Chessboard”, he writes, “If the middle space rebuffs the West, becomes an assertive single entity, and either gains control over the South or forms an alliance with the major Eastern actor, then America’s primacy in Eurasia shrinks dramatically.” Russia is the “middle space” and China is the “major Eastern actor”.

What was feared by the US strategist has happened: For the past 20 years, Russia and China have been building an alliance dedicated to ending US hegemony and beginning a new era in international relations.

This may be why the US aggressively provoked the crisis in Ukraine. The list of provocations is clear: moral and material support for Maidan protests, rejection of the EU agreement (“F*** the EU”), the sniper murders and violent 2014 coup, ignoring the Minsk Agreement approved by the UN Security Council, NATO advisors and training for ultra-nationalists, lethal weaponry to Ukraine, refusal to accept Ukrainian non-membership in NATO, threats to invade Donbass and Crimea.

Before Russia’s intervention in Ukraine, active duty soldier and former Congresswoman Tulsi Gabbard said “They actually want Russia to invade Ukraine. Why would they? Because it gives the Biden administration a clear excuse to levy draconian sanctions… against Russia and the Russian people and number two, it cements this cold war in place. The military industrial complex is the one who benefits from this. They clearly control the Biden administration. Warmongers on both sides in Washington who have been drumming up these tensions. If they get Russia to invade Ukraine it locks in this new cold war, the military industrial complex starts to make a ton more money …. Who pays the price? The American people … the Ukrainian people … the Russian people pay the price. It undermines our own national security but the military industrial complex which controls so many of our elected officials wins and they run to the bank.”

This is accurate but the reasons for the provocations go deeper. Hillary Clinton recently summed up the wishes and dreams of Washington hawks: “The Russians invaded Afghanistan back in 1980 … a lot of countries supplied arms, advice and even some advisors to those who were recruited to fight Russia….a well funded insurgency basically drove the Russians out of Afghanistan…. I think that is the model people are now looking toward.”

US foreign policy has been consistent from Brzezinski to Madeline Albright, Hillary Clinton and on to Victoria Nuland. The results are seen in Aghanistan, Iraq, Yugoslavia, Libya, Syria and now Ukraine.
As with Afghanistan, the US “didn’t push Russia to intervene” but “knowingly increased the probability that they would.” The purpose is the same in both cases: to use a pawn to undermine and potentially eliminate a rival. We expect the US will make every to prolong the bloodshed and war, to bog down the Russian army and prevent a peaceful settlement. The US goal is just what Joe Biden said: regime change in Moscow.

Like Afghanistan, Ukraine is just a pawn on the chessboard.

Rick Sterling is an investigative journalist in the SF Bay Area. He can be contacted at rsterling1@protonmail.com