U.S. Policy towards the Cuban Revolution: The History of the Working Groups 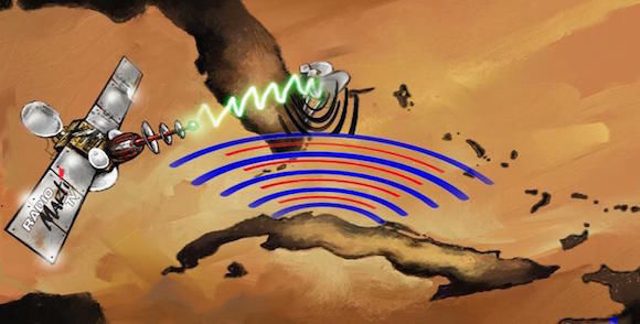 The Presidential Memorandum signed by the White House’s occupant Donald Trump on June 17, directed Secretary of State Rex Tillerson to organize a working group “to examine the technological challenges and opportunities to expand Internet access on the island.” This is not the first time that the U.S. government has created a working group to study and propose ways and methods to end the Cuban Revolution using telecommunications as a weapon.

In 1960, the US Central Intelligence Agency (CIA) commissioned a project to open a radio station to broadcast anti-Cuban programming led by one of the Agency’s biggest propaganda experts, David A. Phillips; a character very knowledgeable of the Cuban reality that had been prominent in Havana during the last years of the government of the tyrant Fulgencio Batista. After the the triumph of the Revolution Phillips had participated in several plans against the revolutionary government, including at least one plan to assassinate Fidel Castro. Phillips organized a working group that carried out a study on the equipment to be used, including the identification of the place for the deployment, the design of the antenna system, the programming and other measures for the operation. On May 17, 1960, on the frequency of 1160 kHz, Radio Cuba Libre (Radio Swan) was picked up in Cuba for the first time.

As a precedent for the illegal broadcast of Radio Martí that began on September 22, 1981, President Ronald Reagan signed executive order 12323, which created a working group or “Presidential Commission for Radio Broadcasting to Cuba.” The objective was to analyze the creation of a new radio service directed specifically to the greater island of the Antilles. The Commission was in charge of studying the possible contents of the programs, sources of information, personnel needs, legal structure of the organization, bills, budgets, study locations and transmitters and to report to the president within a reasonable period of time.

Meanwhile at the end of 1980, the Martí Television project began by the hiring of four consulting firms to carry out research and technological feasibility studies, as well as reports to the President’s Task Force on International Transmissions of the government.

On March 12, 1996, the so-called Helms-Burton law was signed by then president Bill Clinton, providing a platform for the continuity and intensification of the aggressive policies developed by successive US governments.

In the first chapter of the bill, section 109 refers to the authorization to give support to “democratic” and “human rights” groups in Cuba, that is, to small groups that serve the interests of US imperialism within our country. These are publications and informational materials, such as books, videos, and other means of advertising.

With this go ahead, pentagon think tank the Rand Corporation conducted several investigations that recommended the development of a U.S. policy of information and communications aimed at “helping to open the closed system of Cuba and encourage the emergence of an independent civil society.” One of those studies, conducted by Larry Press in 1996, was aimed at improving knowledge about Cuba’s telecommunications situation, especially the prospects for expanding the computer network with internet access. This would serve as a base document for a project on “Actors, results and U.S. policy for a Cuba in the process of change”.

In the research “Cuban telecommunications, the computer network and the implications in the politics of the United States” it was stated that in 1996 Cuba already had four networks with international connections to the Internet – Network of the Center for Genetic Engineering and Biotechnology (CIGBnet), Automated Information Exchange Center (CENIAI), TinoRed of the Joven Club and Infomed – and recognized that: “Despite the serious economic problems, since 1992, Cuban networks have grown remarkably, both in terms of size and quality, mainly because the Cuban government has allowed and financed this growth “(1)

In the recommendations from this research several measures were proposed aimed at increasing interference in Cuban affairs using computer networks marking the embryo of the actions that more recently have been carried out. Since 1994 Cuba has attempted to stimulate a direct IP connection with the Internet to provide Cubans with interactive access to materials from abroad. WilTel company requested a quick response for a permit to build an optical cable between the United States and Cuba. This request is still pending along with other requests we have made to provide different services related to data and including travel from Cuba of technicians and students for the training in the administration of computer networks, and other forms of technical exchange.

In 2004 the document of the so-called “Commission to assist a free Cuba” was published, which had the mandate of President George W. Bush to identify additional means to quickly put an end to the Cuban regime. In 2006, the administration presented a new document where they expand the measures. In chapter 1 it is stated the purpose was to accelerate the end of Castro’s dictatorship: Transition, not succession, the “Cuba Fund for a Democratic Future” was created, which allocated $ 24 million for propaganda against our people, including the one that have been carried out through the Internet.

In February 2006, the State Department, led by Condolezza Rice, created the Task Force for Global Freedom of the Network that was created to focus on monitoring electronic transmissions especially from China, Iran and Cuba, and in July of the following year the President Bush’s decided to create a fourth army in the country, that of cyberspace, which would be based at Barksdale Air Force base in Louisiana, with the mission of maintaining the competitive advantage of the US armed forces in the new cyber theater of military operations. In 2011, at the request of Republican Senator Richard Lugar, chair of the Senate Foreign Relations Committee, Carl Meacham, head of the Latin America section of the State Department met with industry officials for several months to conduct an investigation into how social media and technology could be used to promote and strengthen what they understand as democracy in Latin America. In Meacham’s report, the subversive actions and plans undertaken by the U.S. government against the Cuban Revolution are blatantly acknowledged.

In one section the report states:“The State Department has trained journalists in several countries to increase their ability to quickly disseminate accurate information about important events and issues. Great efforts have been invested in Cuba, the only country that at present is actively censoring the content of US policy. In Cuba, the US Interests Section has offered thousands of sessions on the Internet, courses on blog technology, classes on basic computer training, weekly English classes and library support for the Cuban public. (3) These programs aim to strengthen the capacity of citizens to use existing resources and also create their own social resources that increase the transparency of government and strengthen civil institutions. Although Cuba is certainly a singular case in the great project of the North American foreign policy, the staff noticed the growing interest that the State Department officials have in increasing the basic computing and literacy skills of the Cuban people as a means of empowering the Cubans to carry out positive changes in their own society. “

It is clear that US imperialism has been creating working groups and designing plans to put an end to the example that the Cuban Revolution has meant to people around the world for many years. With the guidance of our revolutionary party and government, and the participation of the outstanding human capital formed in these 60 years, each of them has failed. We can not ignore that Cuba is also in the sights of the current offensive of the Latin American right and their oligarchies, organized and led by the power of U.S. imperialism. The content of the Trump Memorandum is a piece of this scaffolding.

In summary, in the field of Information and Communication, US imperialism has a plan aimed at subverting the Cuban order and constitution, using computer networks and programs.

José Martí once said- “the plans of our enemies is that of festering, dispersing, dividing and drowning us. That is why we obey another plan; teach us all in our capacity, squeeze, gather, deceive, finally make our homeland free. Our Plan against their plan.”

All of Guantanamo is ours