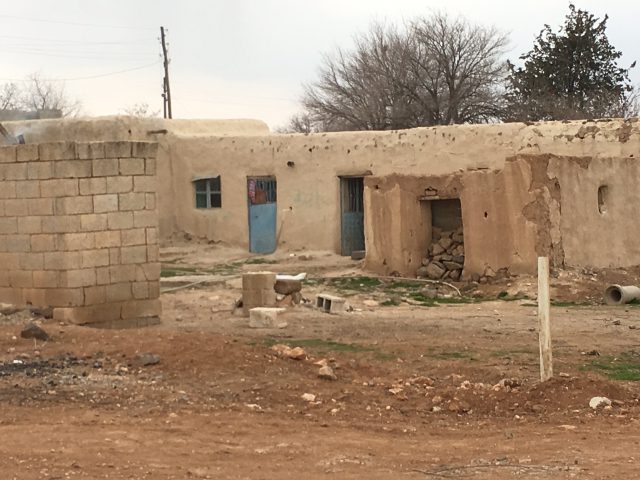 A Turkish poet, Mustafa Goren, is standing in the middle of a street in the border town of Karkamış. He raises his index finger towards the sky prophetically, then shouts at me, with his powerful voice:

“I’m against the invasion into Syria! Is this another game of the West? These are our children, our boys that are dying there. These are innocent children of Syria that are being blown to pieces. Why do Syrian people have to run to Europe; tell me why? Why do they have to humiliate themselves, to suffer? Syria used to be rich. Those people are even more cultured than we are, more cultured than the West. How did this conflict begin?”

Mustafa Goren then strikes a dramatic pose. Suddenly he looks like the great Soviet poet Mayakovski, spitting out his verses full of anger. This is not just poetry, but a desperate j’accuse?

As if mocking him, behind his back, Turkish military trucks are moving towards the border, passing through the streets where almost all shops have been shut down, sad victims of the conflict that keeps devastating further and further an already desperate Turkish economy.

“I speak to Europe now: You will soon be drowning in the water that you are now drinking. You will pay for what you are doing to Syria and to other countries. It is entirely your fault, Europe! It is entirely your fault the West! One day, true leaders of the world will come, and they’ll cut off all the gas and petrol supplies to you, and you’ll find yourself in even deeper shit the one into which you threw this part of the world! You’ll have to burn your designer clothes and shoes, just to stay warm. You forgot, but you will soon be reminded, Europe: we are all human beings!” 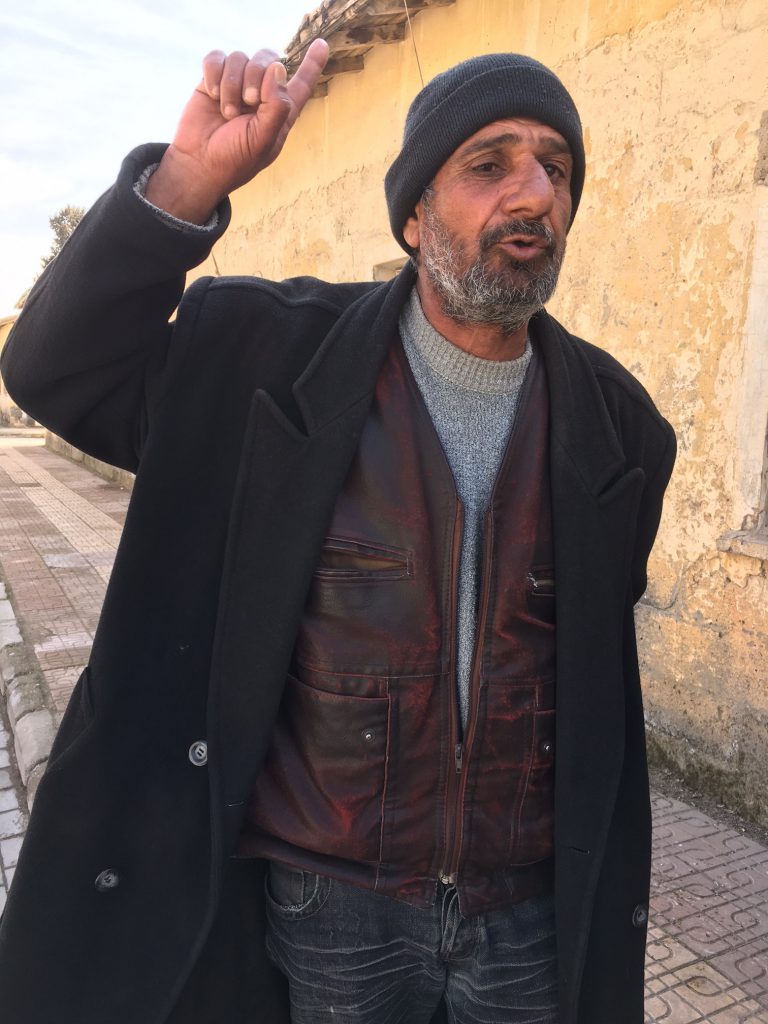 Mr Goren recites in front of a humble stall, which is selling cigarettes. It is adorned with historic photographs of Kemal Ataturk. A few meters from there, an enormous watchtower is rising towards the dark, cloudy sky.

The border is right there, defined by a tall, gray, melancholic concrete wall, and by several watchtowers. Right next to the gate, a mobile medical unit and several ambulances are standing by. They are ready to cross the frontier, to move into Syria, where the Turkish military is officially fighting the terrorists, but in reality undermining the Syrian forces. The operation is called “Euphrates Shield”.

“ISIS came all the way here, to the Syrian town of Jarabulus, right across the border”, explained Bulent Polat, a trader whose shop is now half empty, due to the war.

“Jarabulus is under the control of the Turkish military. Just imagine: the Turkish government doesn’t allow Syrian President Assad to send fighter jets nearer than 3 kilometers to the border, but it allows ISIS to come as close as 3 meters. We should have never interfered with the domestic policy of Syria, and there would be peace!”

Mr. Polat is from the opposition ‘The Republican People’s Party’. He’s a Kemalist. For years he worked in both sides of the border. Now he recalls, in disgust:

“To mobilize people against Assad, the anti-government militants supported by Turkey and the West, have been dressing in official Syrian military uniforms, then shoot at the civilians, killing many. Then they say: ‘Assad did it!’ It has been happening all over Syria.”

Now Turkey is building a 900-kilometers long wall, which is supposed to seal hermetically its border with Syria. Express.co.uk quoted Turkish President Recep Tayyip Erdoğan: “The problem of terrorism and the refugee problem will be resolved when we secure Syrian soil step by step”.

The Kurdish population on both sides of the border is clearly outraged about the wall. The tall ugly structure is dividing communities and marks the region like an ugly scar. Now Turkish forces can always enter Syria, using tanks and armored vehicles, while Syrians are being kept out.

It is strictly forbidden to photograph the border region. In fact, foreign journalists are forbidden to even ask questions. Turkey is under Martial Law, and anyone can be detained and questioned for days, without charge or explanation.

We left Karkamış and drove to an ancient graveyard, from where we photographed the wall and the lazy waters of the river Euphrates. The Syrian town of Jarabulus was right in front of us.

“Injection of the militants began from the Turkish territory. Assad had to launch a defensive security operation. That’s how the war began.”

I knew precisely what he was saying. Back in 2012 I worked around Antakya, discovering that while officially listed as a ‘refugee facility’, Apaydin camp was in fact a training facility for the anti-Syrian jihadi cadres. The NATO facility – Incirlik air force base near the city of Adana – was allegedly training several other groups. In 2013 I returned to Antakya, making a documentary film for the South American television channel Telesur. The entire area was converted into a security zone, and my team was repeatedly stopped and intimidated. We managed to track the militants who were armed in Turkey. Those wounded in Syria were treated in Antakya.

Now from Gaziantep to Kilis, the entire area is flooded with refugees and its economy is destroyed.

We drove through villages like Ikizkaya, consisting mainly of clay houses, many of them abandoned.

Fear is everywhere. In Kalbursait Village near Karkamış, a Syrian refugee explained that he has lives here, with his animals, for four years.

If the war stops, would he go back? He doesn’t know, he replied.

“Let’s go”, my interpreter insisted. “This man is petrified.”

Everybody appears to be frightened.

One night I was taken by my friends from the TKP near the back entrance of Dr. Ersin Arslan State Hospital in Gaziantep. This is where wounded Free Syria Army and other militants are brought to at night. We ordered tea at a local eatery, and began conversing with the staff. Suddenly, there was a loud shout from outside:

Cafe guests ran for a cover. We got out, to investigate. A bearded man, obviously an Arab speaker, was leaning against the wall. He had two bulled wounds in his foot. The wounds were infected. The man was clearly distressed. He was mumbling something about jihad.

Gaziantep is a recruitment center for militant cadres and for the Free Syrian Army; so are towns and cities like Kilis and Antakya.

At night, I was taken to a bakery near a mosque in Gaziantep, where recruitment and indoctrination of the militants takes place.

I was given photos of bodies torn apart by powerful explosions. I was shown images of dead children, of morgues and of people in total desperation.

Mr. Kutay Sirikli from the opposition TKP pointed an accusative finger at both the West and Ankara:

“Recep Tayyip Erdoğan is one of the founding fathers of the so-called ‘Great Middle East Project’. He’s trying to politicize the entire Middle East. His dream is a New Ottoman Empire. Of course if there is any novel formation in this part of the world, it is always connected to the West. However, from time to time, Erdoğan takes his own initiative. And he makes profit: petrol that is stolen by ISIS from the Syrian regions goes through Turkey to the West. They refine it here.”

I’m told about horrid refugee camps, where child abuse, even rape are rampant. I visited several of them in the past, around Antakya, and one near the city of Nizip this time. They don’t appear to be as bad as those in Europe, but one never knows what is hiding under the surface.

Syrian refugees get work permits now, and there is talk that soon they would be able to apply for Turkish citizenship if they pass the language test. Syrian children get one-year intensive language course, and then they can attend local schools. Some refugees get even the equivalent of the Turkish minimal wage as a support – 1.400 liras per month (almost US$400).

In Istanbul, the historian Yiğit Günay, clarified this contradiction:

“Many people believe that this government has some integrated plan. The truth is, there is nothing like that – not even some two-year plan. Nobody trusts anybody, anymore, and things keep changing overnight.”

As we are driving towards the airport in Adana, my friend and interpreter looks suddenly tired:

“As a person who visited Aleppo before the invasion I am devastated because of what happened to that ancient and stunning city… It was a thriving business hub with incredibly beautiful archeological and historical sites when I was there…. now it is a city that will need decades to recover, and most of the damage is irretrievable. The whole area is now a total disaster…”

Before entering the city of Adana, the bright runway lights of Incirlik air force base suddenly emerge from the darkness. This airport is perhaps the most vivid symbol of NATO war games in this part of the world. One cannot just pass – almost all cars are being stopped and checked.

Fear is engulfing Southeast Turkey. When several hours earlier we drove into the Elbeyli border town, (a crossing on the way to the embattled Syrian city of Al Bab) what we faced were new mighty walls and fences, as well as high-tech security cameras. From here, the Turkish army is periodically invading Syria.

I decided to get my hair cut here, so I could chat with the locals. Just a few minutes and my barber whispered: “They are surrounding you.” Police and plain clothed security cadres were looking at us through the window, taking notes, calling somewhere. We paid and drove away from this dismal town, at neck breaking speed.

We wouldn’t be able last long here, nobody would. This cat and mouse game is exhausting and truly dangerous. But what is Turkey really trying to hide? It is a well-known fact that it is training the militants, and invading Syria. All this is not a secret. So what is?

Perhaps the true ‘secret’ is that many of its own citizens are actually against the war. And that not Syria only, but to some extent Turkey too, is now suffering and bleeding.