Trump’s honeymoon with the Venezuelan opposition

Trump’s “military option” against Venezuela took over the spotlight after the Constituent Assembly (ANC) was sworn in. It also appeared at a time when the Venezuelan opposition’s internal divisions are showing once again. Nevertheless, this meddling was not an act of improvisation by a loose-cannon of a president, but something that from the very beginning was a part of the violent plan pursued by a sector of the opposition.

This antidemocratic opposition is represented by, among others, Julio Borges the president of the National Assembly which is currently in contempt of court. Borges visited General McMaster on May 6 to agree on “strong need to bring the crisis to a quick and peaceful conclusion” (to be understood as a foreign intervention); by Maria Corina Machado, who is barred from holding political office after being removed from her post as a member of parliament; by Leopoldo López, who was convicted and later transferred to house arrest, despite his attempts to sabotage the democratic process of July 30; by Freddy Guevara, who has repeatedly voiced his support for the violence of the guarimbas (street barricades) and against public institutions, with the stated goal of creating a state of “ungovernability”, etc

We can then assert that the opposition, having rejected dialogue with the government in January 2017 and spread a message of intransigent hatred among its supporters, is largely responsible for the roughly 120 dead and hundreds of wounded people in recent months. The only method that has allowed it to present a semblance of unity was the strategy of violence in the streets. But after the Constituent Assembly elections, this fledgling unity was immediately shattered, as shown by the recent statements of Henry Ramos Allup and Freddy Guevara with respect to the upcoming regional elections.

In this context, the Truth Commission, one of the first initiatives of the Constituent Assembly, meant to establish all the actors responsible for the violence, be they from the opposition or from security forces, is another sign of the commitment to peace from President Maduro’s government. Another task that this Commission faces is to determine the responsibilities of the National Assembly – led by the opposition majority since December 2015 – in the economic war, particularly its petitions in favour of international sanctions against Venezuela, which came to light in the recent case of Crédit Suisse. 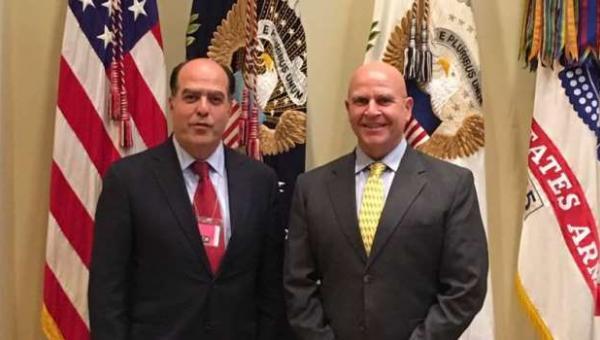 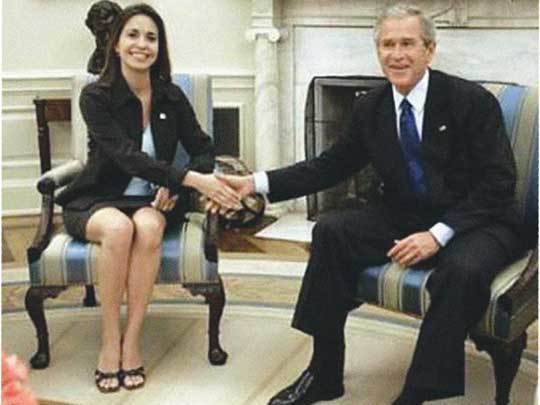 Close and longlasting ties between the Venezuelan opposition and high-ranking US officials
Top: Lilian Tintori next to Donald Trump, VP Mike Pence and senator Marco Rubio, in February 2017
Left: Julio Borges visiting H.R. McMaster, National Security advisor, in May 2017
Right: Maria Corina Machado next to George W. Bush in May 2005

Having rejected dialogue and the truth, what is left for an opposition that turned its back on the people, throwing its weight behind a “regime change” doctrine? Now more than ever it needed a boost from the empire, and that is how Trump’s statement should be understood:

“We have many options for Venezuela, including a military option if necessary […] We have troops all over the world, in very far away places, Venezuela is not very far away and its people are suffering”.

What Trump is announcing is nothing but a “remake” of the 1973 coup against Allende. However, this is a double-edged sword, since the antidemocratic agenda of neoliberal governments is becoming clearer by the day, as can be seen from the recent Statement from Lima. The media propaganda that sells the opposition as being democratic is also on is also becoming more transparent, with this opposition having been more than open to a military intervention for a long time.

Throughout these past 18 years, the Bolivarian Revolution has been an exemplary process in what concerns democracy and human rights – understood in their broader sense and not as selectively manipulated to justify wars in Yugoslavia, Afghanistan or Libya.

The regional elections, scheduled for October by the electoral authorities, are another opportunity for the opposition, which needs to choose between democracy and coup-plotting, between foreign meddling and national sovereignty.

Separating the wheat from the chaff is the historical task before the Venezuelan and Latin American peoples.