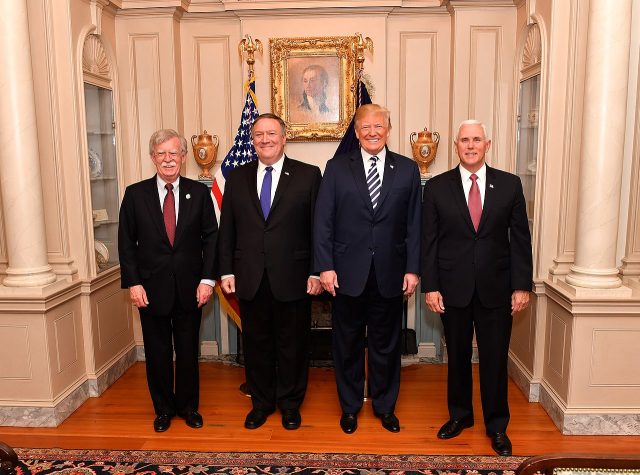 US willingness to parley with the PLO was based on the PLO’s participation in a bi-partisan charade: the peace process. Both Republican and Democratic parties have traditionally spoken in favor of a two-state settlement even while constantly undermining it. The peace process was the name given to the game of geopolitical management the US used to maintain its relationships with client states in Jordan, Egypt, Qatar, and Saudi Arabia. Such relationships, in fact, were transactions. The US secured arms markets, purchases of its treasuries, sowing of anti-Shia sectarianism, and socio-political containment – in fact, social de-development – of the largest Arab working class, the Egyptians, in exchange for supporting local elites.

Internationally, the two-state settlement has been a pivot and shorthand for the entire post-World War II US order: offering lip service to international law while substantively ripping it to pieces, especially the post-WWII Nuremberg precedent, enshrined in the UN system, which set up sovereignty as a normative principle of the international order. Alongside such talk, the US committed to multilateral institutions to legitimize its dominance. As part of that process, it committed to superficial decolonization when it was forced to and rejected decolonization where it could (as in South Africa and Palestine). Alongside those policies, it sought to contain the social aspirations of a decolonizing world through the development project, and later to roll back the achievements of decolonization when possible – the project known as neo-liberalism.

That order is done. Saudi Arabia and Qatar’s open secret of alliance with Israel under the US security umbrella, and their hostility to the regional forces which either oppose or are rear-bases for opposition to Israeli policies, have been one element in that unraveling. Saudi Arabia is hated throughout the region. It can count only on the disorganization of regional radical forces and blighting the Iranian model through sectarianism.

But it is not merely the local order which is done, but the international one as well, and it is the latter whose collapse accelerates the former’s disintegration.

World-systems theorists have long argued that at this millennium’s dawn we would be entering a stage of transition, systemic instability, and systemic chaos. The end-game is a new world-system, with new rules. A new system need not mean a better one. It could easily be one which is worse – authoritarian capitalism in states like China, mixed with racist forms of social democracy and militarized borders in the US and the EU, and other countries reduced to de-developed and polluted wastelands and raw material sources.

At the core of current world-systemic instability is China’s rise, with its GDP in purchasing-power-parity adjusted terms equivalent to the US’s. A second aspect is the resurgence of Russia as a force which seeks to leverage military weight into standing as a full participant in the capitalist system. A third is the ecological crisis.

China’s rise and Russia’s re-emergence have eroded US capacity to call the shots. These nuclear-armed states have used their geopolitical and military weight to limit the amount of force the US and what Syrian former political prisoner Thaer Deeb calls the other “predators of the colonial world” have been able to bring to bear in their attempt to shift Syria away from Iran and Hezbollah – the actual reason for the aggression-by-proxy against Syria. The knowledge that Russia was prepared to play nuclear chicken to defend its interests has constrained direct US escalation (Hence, few MANPADs to Syria) and US domestic popular unease has prevented direct engagement outside the so-called “anti-ISIS” campaign which has been mostly a war on Syrian cities and an excuse for occupying Syria.

In Yemen, the Houthis and elements of the Yemeni army have fought the US-UAE-Saudi alliance to a standstill, at a cost of literally uncounted deaths – perhaps thousands or tens on the side of the US alliance, and an order of magnitude more amongst Yemeni civilians, whom nobody cares enough about to count.

Thus, throughout the Middle East, the US alliance has lost the ability to achieve maximal geopolitical aims. It can destroy – and destruction to avoid regional development is indeed one of its goals – but it cannot enfold countries into its economic and political architecture. And even its capacity for destruction is now limited. The only country whose economic policies it wishes to shift are Iran’s, since the remainder of the forces it is targeting do not have nationalist social compacts. Iran can be targeted with asphyxiating sanctions but cannot be broken militarily.

Worse from the US perspective, there is now battlefield coordination amongst forces arrayed from Lebanon to Iran. Such groups have a wide range of social visions. The Houthis draw some inspiration from the late Hugo Chávez of Venezuela. Other forces are neo-liberal – indeed, the uprising which the US and its allies weaponized in Syria has its roots in what Lebanese economist Linda Matar calls the phasing out of “traditional social support systems, particularly in the countryside.” But these elements are united in rejecting US state-shattering in the region.

Trump campaigned on escalation in some zones and de-escalation in others. In Iran, he has shifted from the Obama long-game of breaking Iran through trying to create a middle-class and upper-class willing to shift Iran’s foreign policy orientation and reverse the 1979 revolution, to a short-term strategy of social shattering through sanctions. John Bolton’s attack on the ICC is of a kind with these other policies – a desire for a shift from multilateral instruments of hegemony to unilateral instruments of simple dominance. Since the two-state manuever was a keystone of a broader long-run hegemonic strategy, breaking with it is of a piece with the move to unvarnished domination, oriented essentially to the containment and perhaps collapse of China and Iran.

Trump has ripped the veils off US government strategy. This portends little for Palestine, since the Democratic Party – Lobby or no Lobby – will disintegrate into a thousand fragments before it will push for even a whisper of justice for Palestinians. There is no hope there. However, larger shifts in turn speak to a larger question: where does Palestine and the struggles to which Palestine is increasingly linked fit into a long-term strategy for those of us who wish for a relatively more equal and just world – a world with room for many worlds?

There is, first, the question of China and Russia. Russia and China have stayed the collapse of the Syrian and perhaps beyond it, the Iranian states. The former states are pursuing independent regional agendas, which may secure an eye in the storm of US violence but are not in themselves liberatory. Indeed, Russia and China both have alliances with both Israel and Syria – a strategy which is only as contradictory as the contradictory goal of seeking inclusion in a hierarchical system falling apart in front of our eyes.

Furthermore, in both societies, capitalism dominates. Their rulers have relatively little to offer to the Palestinian struggle, nor those supporting it in the US context. Russian nuclear force has kept intact the state structures which are the scaffolding for any reconstruction in Syria. This effort is essentially conservative, and Russia does not hide that it does not share the goals of Iran and Hezbollah vis-à-vis Israel. China’s international role is more complex: it is creating the infrastructure, the Belt and Road Initiative, for a clearly hierarchical but less violent world trading system. It is both a major supporter of the US military through bond purchases, a major subcontractor for US manufacturing, and a major target of US grand area strategy and military encirclement. The complexity of China’s role especially may open political space for certain alliances or development paths, as Sam Moyo argues, but alliances presume the left’s ability to bring something to the table.

So: what of our forces?

This is not the space to address those who think US-backed elements can bring anything positive to the region or elsewhere, and I have made clear that I do not think China or Russia are “our” forces.
Locally, within the Euro-Atlantic states, there is an ever-stronger social democratic current. It is primarily the expression of the downward mobility of large portions of the Euro-American middle classes. It is also the output of the larger climate of systemic instability. From Bernie Sanders to Donald Trump, populism rules, with the tide bringing ashore expressions of large-scale unease, from Sanders to Jeremy Corbyn to Melenchon. These candidates all represent a significant break with the post-1973 neoliberal order, which can no longer provide for its white social base in the core countries.

Both possibilities and mindsets are open in a rare way, with anti-racism and anti-capitalism increasingly alluring to the newly radicalized, alongside right-wing xenophobia arcing across the Atlantic. The social terrain is unusually unsettled, shifting underfoot like magma, and preventing the crystallization of any kind of consensus about the shape of the new order or the path to take to get there. The bad news is not merely that our forces are disorganized – have been disorganized – but that the right has out-organized us. The good news is that a period of systemic instability means there is a massive discontent with the way things are in the core European-US states, and oddly, surprisingly, and beguilingly, elites are unable to channel that discontent into institutionalized channels. What may come of such discontent is a question of organization, which is to say a matter of choice.

Cover photo: U.S. Secretary of State Mike Pompeo poses for a photo with (L to R) National Security Advisor of the United States John Bolton, President Donald J. Trump and Vice President Mike Pence before his swearing-in ceremony at the U.S. Department of State in Washington, D.C., on May 2, 2018. (Photo: State Department photo)