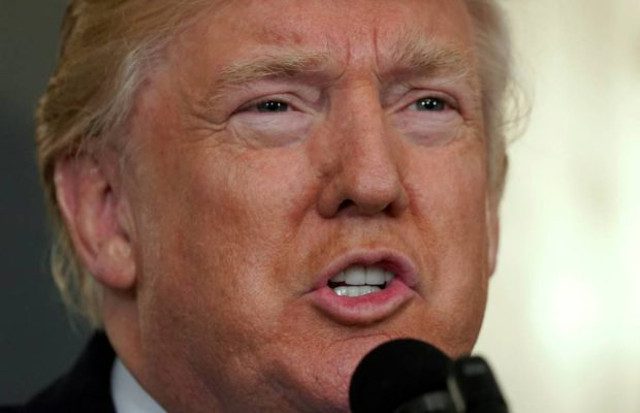 As was the case with Kennedy, Johnson, Nixon, Ford, Carter, Reagan, Bush I, Clinton, Bush II, and even Barack Obama, Donald Trump is mistaken if he thinks that threats, clownish stunts, and bellicose “attacks” against Cuba will accomplish what all the others tried to do but failed miserably. Cuba, its people and its government are made of solid timber, built of revolutionary ideas and practices that are lived every day of every year since January 1, 1959 when Fidel ,”mandó a parar” (1). Cuba is an open hand when someone understands the gesture, but it is a steel fist when the time comes to reject humiliation or unjustified attacks or interference, which is what the tenants of the White House always bring.

However, asking for a little rationality from a brash madman such as Trump is a waste of time. Convinced that he must fulfil the promises he made during the campaign to the most reactionary sectors of the contemptible anti-Cuban maggoty (“gusanera“), he just announced that with a simple stroke of a pen he is erasing the lukewarm agreements signed by Barack Obama and Raul Castro, except for two or three items he will keep, among them that the odious flag of the stars and stripes will continue to fly over his embassy in La Habana.

Precisely at a time when he finds himself rejected by most of the American people, due to his racist, xenophobic and divisive views and actions, and even several leaders of his own political party question him and have joined the investigation into his shady past, endangering his very permanence in office, Trump forges ahead, using as his calling card the unconditional support that some right wing extremist inhabitants of Miami’s “Little Havana” offer him.

With an anti-communism speech befitting a cold war dinosaur, the Washington boss and his histrionics are embraced by the followers of Senator Marco Rubio, Mario Díaz Balart and some notable accomplices of the terrorist Luis Posada Carriles, who is scandalously protected by the American establishment. Trump, with his stupid laughter and bombastic gestures, likes to surround himself with scum and be flattered to the point of nausea by assassins such as the veterans of the Bay of Pigs invasion (thankfully defeated in Playa Giron by Fidel and his combatants) or by the holders of the ill gotten millions of dollars meant to finance campaigns against the Cuban Revolution and the Cuban government. While some mistaken analysts of the Latin American reality held some hope regarding Trump, because “he was not as bad” as the lady “democrat” who celebrated the murder of Muammar Gaddafi, Cuba and her unconquered Revolution continues to be a thorn in the US government’s side.  That is precisely why Trump dove into the scene prepared by the threatening uproar of Florida’s mafia and with all of them furiously applauding him, engaged in a ceremony that resembled the days of April 2002, when Carmona, “the brief“, was anointed “President” for a few hours in Bolivarian Venezuela. The scene was a mix of hysterical applause, obsequious smiles celebrating the buffoon, hypocritical embraces by the remnants of those thousands who, to the good fortune of Cuba, ran away from the Revolution as soon as it triumphed.

This last Friday, in the Miami theater named after one of the terrorists who tried to invade Cuba through Playa Giron (the Bay of Pigs) and was captured, Trump spared nothing in his flirtation with the pack of male and female hounds, marked by the fire of revanchism and hatred towards the gigantic conquests of the Cuban Revolution. The dignified permanence of the Revolution after almost six decades of criminal blockade, is something that was not foreseen by the counter-revolutionaries, even in their worst nightmares. That is what happens and will continue to happen, because they will never understand the Cuban people, a people that is ready to struggle against everything that could undermine their social and political conquests. The benefits conquered by a government “from, by and for the humble ones“, as Fidel used to say, have turned generations of Cubans into proud representatives of a country where culture, education, health and social justice are not empty words, as is the case in the great majority of the corners of the planet. How can an arrogant Donald Trump boast that he will defend “democracy and human rights” in Cuba when in his own backyard the only thing he has to show are the abominable consequences of capitalism. His is a micro-world, where human beings do not count, where health is a business accessible only to a few, education is ultra-elitist, the streets are converted into massive living quarters for those ejected from the “American way of life”, drug consumption is among the highest in the world, and death roams the streets as a result of the “devolution” produced by the neverending imperialist wars the United States carries on daily.

Only 90 miles away, the statistics speak of life. In 2016, Cuba held a world-beating infant mortality rate to 4.3 per thousand live births. And speaking of the healthcare its yankee neighbors do not have, the Cuban Revolution made it a goal from its beginning.  It was the first Latin American nation to eradicate polio, and has also eliminated infectious diseases such as malaria, whooping cough, German measles, neonatal tetanus, diphtheria, measles, congenital measles syndrome and meningoencephalitis posparotiditis. The Cuban vaccines against meningitis and the advanced research on controlling different types of carcinogenic diseases are well respected by international organizations. It is all the result of a public health system that not only reaches every corner of the country, but extends to numerous nations through cooperation agreements and initiatives based on solidarity, as Cuba’s contribution has shown –with its medical personnel–  in the fight against Ebola in West Africa, or the tens of brigadistas who put the medical knowledge they obtained at the service of humble peoples all over the world, for free. And what can we say about education, not only in its benefits for the internal development of Cuba, but which has also been carried out as literacy programs reaching the whole planet, to bring wisdom to all those human beings that the capitalist system would prefer to keep excluded and illiterate.

Moreover, Cuba has also accomplished most of the Millennium Development Goals. It has eradicated extreme poverty and hunger, created universal elementary education and encouraged gender equality and the empowerment of women. As a result, Cuban statistics rank among the nations with the highest human development, occupying a prominent place among 187 countries, all deriving from the sustained policies of social welfare promoted by a government that cares for its people. Contrary to the winds of war and intervention that always blow from Washington, Cuba works for peace in the continent and the world. And this is why, contrary to Trump’s pathetic speech in Miami, in the last few years Cuba has had outstanding foreign policy accomplishments.  Cuba takes part with voice and vote in tens of international forums and organizations, its advice is sought by countries that in spite of being considered “developed” are still unable to reach the goals already surpassed by the Cuban Revolution in the basic social aspects demanded by their respective populations.

Mr. Trump: all countries… every single one! reject the blockade and said so at the last gathering that dealt with the subject at the United Nations, where even the most diehard enemies of Cuba, such as Israel and the United States, opted to abstain in order to avoid too much humiliation. When needed, Cuba’s territory has been used to encourage mechanisms of dialogue and peace building in countries with endless conflicts, with the recent peace negotiations between FARC and the government of Colombia being an example of that.

Trump may scream and angrily stomp his feet all he wants in that Miami bordello, surrounded by a miniscule group of gusanos (all over Florida there are thousands of Cuban-Americans who do not agree with that speech, full of threats and interventionist intentions) but he will never bring the dignified and sovereign people of Cuba to their knees. As the press release by the revolutionary government put it : “Any strategy geared to change the political, economical and social system of Cuba, whether it hopes to accomplish it through pressure and imposition or by using more subtle methods, will be condemned to failure“.  Not only are the Cuban men and women ready to defend themselves from this turn of the screw of imperialist policy, but they will always enjoy the grateful solidarity of all those who consider that the prosperous and sustainable Socialist Revolution is the best possible world for which we must struggle at all costs.

From the depths of the authentic anti-colonialist, anti-imperialist and anti-capitalist thought and action, it is time to say once again, to Donald Trump: “Cuba sí, yanquis no”.

The Military Option Against Venezuela in the “Year of the Americas”