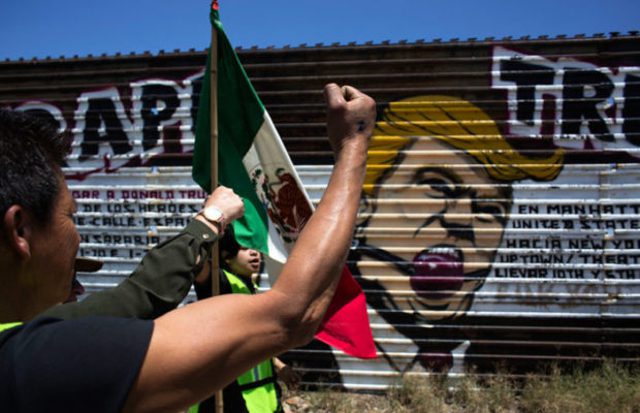 “I am here to tell you that we will recover our people’s morale and dignity, that in a short time they will not believe how big it has grown and it will challenge the future. We are refounding with a spirit of greatness what others have turned into a lack of jobs, misery, and loss of our self-esteem. Now, we stand and it will be forever.” Donald Trump? No, Hitler, in 1926.

There is a similarity between the discourses of both leaders and there could be also similarities in their policies, if Trump is not stopped in time. Both sensed what resonated with the masses, those silent majorities that had been left behind. People that had been promised a part of the great “American Dream” were left stranded halfway and in constant recession.

Thanks to his ability to sense the right time to deliver a great blow, this package of intolerance, authoritarianism and incitement, called Trump, arose. Crazy? No. This guy knows pretty well what he is doing and who he is speaking to. He also guessed that the receptive ears that listened to him during his campaign look at him as the man who has come to throw them a lifeline in the middle of the sea. This is why Trump is so confident in applying a racist immigration policy, under the guise of “securing the borders”, or in applying a xenophobic ban against citizens from several Muslim countries. Trump feels supported by all those voters who fear and hate anything that is different. Except when they use those people to do the work they do not enjoy doing themselves.

In the current onslaught, there also is the particular “war” that the U.S. leader has begun against Mexico and its inhabitants—both against those who already are on American soil (over 34 million) and those who try to enter the country every day. Insulting those indispensable individuals who have tamed the aggressive and unfriendly lands of the Empire (and therefore allowing them to access the best parts of it), Trump intends to build a wall, or more precisely, enlarging the currently existing one.

There is nothing more symbolic in his immigration policy than building a concrete monstrosity full of turrets manned by armed guards. A wall to separate the whites from the Ku Klux Klan and the Minutemen, who enjoy hunting the “wetbacks” who dare cross the border in its more treacherous points. On one side will remain these men and women and their “hamburguer culture”, and on the other not only Mexico, but all of Latin America. It will be a separation as clear as day. But it is this clarity of the brutal decisions of the new commander in chief that has generated countless reactions on the streets, which may possibly generate a serious blowback for the arrogant billionaire.

Despite the usual acquiescence that the President of Mexico, Peña Nieto, has always shown to the powerful neighbor, this time he had to bite his tongue and bow down, not out of dignity, but because he realizes that he might be overrun by reality. Trump’s challenge is generating multiple responses among Mexican people, even among those political parties that once idolized the American flag. Hearing Vicente Fox saying that the wall is “unacceptable” is pathetic, knowing how complacently the former Mexican president behaved with Trump´s predecessors during his time in office, but it is clear that he said that because people are getting angry, and no one wants to be called a “cipayo” (sell-out) like Peña Nieto.

What should concern us now is not who will pay for the wall: the strength of our protests must destroy the wall from all flanks. In order to achieve this, a necessary condition—which many in Mexico are pointing out— is for the popular revolt to have a higher degree of unity and patriotism, and therefore anti-imperialism, which has been missing even in the face of terrible events that have befallen the Mexicans in recent times. It is also necessary for this recipe of resistance and struggle to expand throughout the rest of the continent, challenging those erroneous predictions that validate Trump’s “nationalism”. The only nationalism that makes sense for those who live between the Rio Grande and Tierra del Fuego to embrace is the one that expels transnational companies and their backers from our lands. It is Latin America’s revolutionary nationalism, represented since 1959 by the heroic Cuban Revolution and strengthened by Hugo Chávez in Venezuela, Evo Morales, and others.

Just as Hillary Clinton represented the worst kind of war-mongering, Trump with his McCarthyism and his dreams of expansion through new and equally-dangerous trade agreements with Latin America, or his hatred of the Arab nations that the has U.S. invaded and destroyed, cannot be praised under a false idea of progress and a misguided analysis of reality.

Today, Mexico and its people are in the front line of a battle that the imperial power imposes on them. And the rebel sentiment and action of rest of the continent must align with Mexico’s people, never with its rulers, without any sort of doubt.