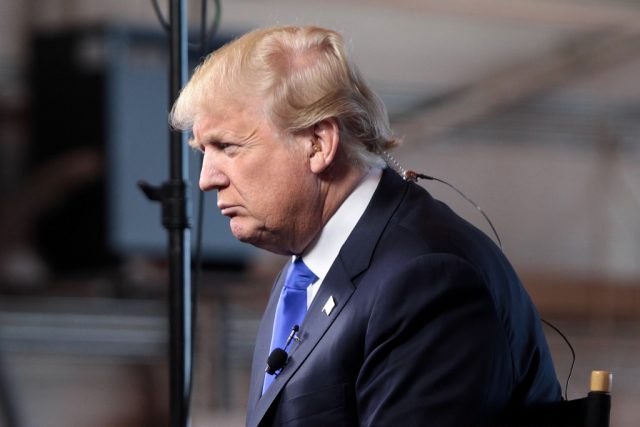 The ruling class is responsible for keeping Trump in office and for every racist, reactionary thing he does. Trump is their representative as a class and the masses must hold the capitalists accountable for every crime Trump commits against the people.

In accordance with their role in capitalist society, most high government officials, elected or appointed, have gangster-like qualities. These officials spend much of their time conspiring with the wealthy on schemes for fleecing or otherwise attacking the masses of people. Unlike the mob, they must carry out their schemes within the framework of capitalist politics.

The mob is differentiated from the capitalist establishment in that they are not constrained to carry out their crimes under cover of legality. On the contrary, mob activities function outside the boundaries of bourgeois legality with the silent consent of the ruling class and its law enforcement agencies. Furthermore, mob crimes are on a vastly smaller scale than the crimes of the Pentagon, the CIA and the FBI.

That being said, among bourgeois politicians with gangster qualities, Donald Trump stands above the crowd. He is a pampered real estate billionaire who has functioned by ordering subordinates around, cheating contractors and stiffing workers. When he gets caught in a mistake, he mobilizes his army of lawyers to clean things up.

He won the presidency by using his television career as a springboard and taking advantage of the complete bankruptcy of the Democratic Party leadership. His campaign strategists also took advantage of the undemocratic institution of the Electoral College to eke out an electoral victory while losing the popular vote. (Hillary Clinton, of course, was also a corrupt, militaristic, Wall Street-owned enemy of the people.)

Presidency as the road to (more) riches

Trump has not only refused to divest from his billions in assets but also sought to earn even more from his status in the White House. He continues to urge foreign leaders and associates to stay at his Washington hotel. He has raised the fee for membership at the Mar-a-Lago golf club from $100,000 to $200,000. He has refused to release his tax returns in order to cover up his investments. He has deals in Turkey, Azerbaijan and other places around the globe. He has drawn up a tax plan from which he and his fellow real estate moguls will reap hundreds of millions of dollars.

His daughter, Ivanka Trump, has spread her brand all over the world and continues to do so. His son-in-law and chief adviser, Jared Kushner, keeps a real estate empire of his own. “Although Mr. Kushner resigned in January from his chief executive role at Kushner Companies,” reports the New York Times of April 26, “he remains the beneficiary of trusts that own the sprawling real estate business. The firm has taken part in roughly $7 billion in acquisitions over the last decade, many of them backed by foreign partners whose identities he will not reveal.”

Now this right-wing, authoritarian, blustering buffoon, who knows nothing of bourgeois statecraft and has no inclination to learn or to seek advice, is formally in charge of U.S. imperialism.

When Trump gets U.S. capitalism in trouble with U.S. imperialist allies in NATO, or threatens corporate interests by ranting about trade wars with the People’s Republic of China (population 1.3 billion), Canada and Mexico (U.S. big business’ two largest trade markets), or cannot get the Republican Congress to throw 24 million people off health care, or passes an anti-Muslim travel ban that provokes a world countermovement, or threatens to provoke a mass rebellion by saying he will deport 11 million undocumented workers, etc., etc., all his subordinates, flunkies and lawyers cannot help him out of the jam.

The ruling class is ambivalent about Trump — for good reason. On the one hand, they are salivating over his tax cut hand-out to billionaires and big corporations. They are ecstatic about his deregulation campaign allowing, among other things, the coal companies to poison the water table, the destruction of auto emissions standards to help the auto barons and the elimination of environmental regulations to aid big industry. And, of course, they love his tax breaks for the health insurance companies.

On the other hand, they are frustrated because they were hoping to get big tax breaks from the repeal of the Affordable Care Act, and they wanted to get their hands on $880 billion in cuts from Medicaid so the money could be used to fund tax breaks for the rich.

However, as much as the ruling class looks forward to profiting from Trump’s tax cuts and regulatory roll-backs, they do not want him to wreck their system. Thus, they have taken measures against him. In the first place, they have surrounded him with generals and Wall Street bankers in the White House and the Cabinet.

Trump is stonewalled on budget, overruled on NAFTA

But most recently they have given him a beating in the budget negotiations. In the latest $1.2 trillion budget, Trump came away empty handed, despite all his bullying and bluster. In the negotiations Trump was overruled by the trusted congressional representatives of the ruling class on key issues:

• Domestic spending rose, instead of $18 billion in cuts demanded by Trump.

• Trump wanted the National ­Institutes of Health budget slashed by $1.2 billion. Instead it was increased by $2 billion.

• Trump asked for the Environmental Protection Agency budget to be slashed by 33 percent. Instead it was cut by 1 percent.

• Planned Parenthood will continue to be funded at current levels in states that do not vote to defund it.

• Trump asked for $30 billion in increased military spending. He got $12.5 billion and another $2.5 billion when he comes up with a plan to defeat the Islamic State group.

• Health care subsidies for the poor will remain (the money goes to the insurance companies).

”The Trump administration said it was no longer considering pulling out of the North American Free Trade Agreement, following a day of intense lobbying from business leaders and lawmakers who rallied to quash internal White House discussion of the prospect,” wrote the Wall Street Journal on April 27. Trump was forced to call the presidents of Mexico and Canada to tell them he had dropped the repeal. He then issued a tweet saying they had called him, instead of admitting that big business and agribusiness had forced him to back down.

Trump, China and the DPRK

Washington is in the midst of a crisis in Korea. It needs the cooperation of the south Korean regime to pursue its belligerent agenda, but instead, Trump picked this moment to tell the south Korean government that he wants to tear up the trade agreement with their country. It is a “bad agreement” negotiated by President Obama, according to Trump. Actually, it was negotiated under George W. Bush.

To make matters worse, Trump told the south Korean government that it would have to pay $1 billion for the Pentagon’s Terminal High Altitude Area Defense anti-missile system, despite an existing agreement by the U.S. to pay the cost of its deployment. National Security Adviser Gen. H.R. McMaster had to get on the phone with south Korean officials and reassure them the U.S. would pay. (WSJ, April 30)

Trump has tried to sweet-talk China and tough-talk the DPRK. But the truth is that the PRC leadership, especially its military, the People’s Liberation Army, cannot ignore the overriding facts of the crisis on the Korean peninsula.

In a phone call on April 23, President Xi asked Trump to refrain from escalating tensions in the region, even if the DPRK announces testing of missiles or nuclear weapons. Xi made an appeal to Trump not to go tit-for-tat and to move in the direction of negotiations.

We certainly do not agree with Xi that the DPRK should be pressured to give up its struggle to build a nuclear deterrent. But, nevertheless, the head of the PRC asked Trump to de-escalate.

One day later, on April 24, in the dead of night, the U.S. deployed the THAAD anti-missile system in south Korea, which is equipped with high-powered radar that reaches beyond the DPRK into China and can be used to spy on the Chinese military. The PRC has already said this deployment would destabilize the strategic balance in the region in favor of U.S. imperialism.

The Chinese leadership and the PLA are fully aware of the threat. It cannot be a coincidence that on the same day as the deployment, China test-launched its first domestically made aircraft carrier. The ship is due to be completed in 2020.

“China has launched its first aircraft carrier built entirely on its own, in a demonstration of the growing technical sophistication of its defense industries and determination to safeguard its maritime territorial claims and crucial trade routes. The 50,000-ton carrier was towed from its dockyard just after 9 a.m. Wednesday.” (Washington Post, April 26)

But the unspoken message is that China has its own naval power, including a fully armed and functional Soviet-built carrier which it obtained from Ukraine and refurbished. China restrained its response to Trump and the Pentagon by not deploying its armed aircraft carrier and deploying the unfinished one instead. But the message was sent.

What is also clear from these events is that U.S. imperialism and the Pentagon are the enemies of both the DPRK and the PRC. The Pentagon has been out for revenge against the DPRK because this heroic socialist country has fearlessly stood up to Washington, as firmly now as it did during the 1950-53 Korean War, when it rebuffed the mighty U.S. war machine.

U.S. imperialism is also opposed to the People’s Republic of China because — despite the growth of capitalist millionaires and billionaires inside the socialist country — the Communist Party of China and the People’s Liberation Army still stand as guardians of state-owned enterprises and economic planning, which are hallmarks of socialism.

Washington realizes that while U.S. imperialism is mired in economic stagnation and military and political crises around the globe, China is steadily growing stronger, both economically and militarily. It is building influence in Asia, Africa and Latin America through infrastructure projects that help the former colonies overcome imperialist-imposed underdevelopment.

At a moment when U.S. imperialism is off balance at home and abroad, the capitalist ruling class needs to keep their gangster-real estate president in check, so he does not add to Washington’s instability.

Despite all the attempts by the established ruling class to distance themselves from Trump, the capitalist government is the executive committee of the ruling class. Karl Marx said it long ago, and it still holds true today.

There are many ways that the bosses could get rid of him, given all the illegality of his family-enriching regime. Instead, the ruling class is responsible for keeping Trump in office and for every racist, reactionary thing he does. Trump is their representative as a class, and the masses must hold the capitalists accountable for every crime he commits against the people.