Trump as a reflection of contradictions of capitalism 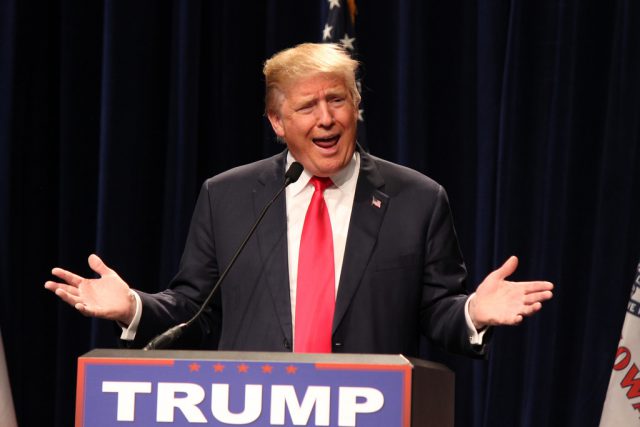 The first weeks of Trump’s presidency did not resemble honeymoon normally enjoyed by newly elected leaders of the United States. The severity and aggressiveness of the debate is unprecedented. Liberals threw at Trump all of their hatred, while the conservative public – all of its delight. Opinions in Russia are split roughly along the same lines as they are in America.

The situation on the Left is much more complex. While some repeat, like well-trained parrots, the talking points of liberal propaganda, passionately quoting the CNN and the «New York Times», the others, exhibit at least some schadenfreude about the disintegration of Democratic Party, and the collapse of free trade agreements. However, even in the last case, the discussion, with a few exceptions, does not go beyond the question of whether we like or do not like the 45th president of the US and his decisions.

Assessments of Trump’s personality, and even actions, are the last thing we need if we are to understand the perspectives of his term as a president of the US. We would be much better served by an analysis of the processes unfolding before us. Meanwhile, the decisions the new president made so far are a clear evidence of the contradictory character of his policies. Trump and his entourage, perhaps, did not realize the extent of the problem yet, but future course of events will force them to do so.

Wavering of Senator Bernie Sanders, who expresses approval of the decisions of the White House one day, while unleashing a fierce criticism the very next, is revealing in its own way.

In fact, a number of actions and statements by Donald Trump put him on par with the anti-globalists who protested in Seattle in 1999.

But his other decisions and statements unequivocally portray the president as not just a conservative, but as an ardent supporter of the free market and liberal economic doctrines.

On the one hand, Trump cancels Trans-Pacific Partnership agreement and insists on revising NAFTA, the embodiment of neoliberal principles. He berates NATO, talks about Canada-style public health insurance, calls for lower drug prices. President meets with trade unionists at the White House and discusses joint efforts to create jobs. But on the same day, President cancels restrictions and regulations governing the activities of the major Wall Street banks, while negotiations on the price control of medicines turn into promises to lower taxes for manufacturers.

The nomination of Betsy DeVos as a head of the Department of Education is a complete scandal. And not only because of her conservative views, but also because the lady who was put in charge of the public schools, is in a sharp conflict with the professional community – how does this fit in with the promise to return power to the people?

It is most likely, though, that from Trump’s point of view, there is no contradiction. Yes, Betsy DeVos and teachers experience mutual hatred, but on the other hand, she is in agreement with the most ignorant part of parents, who are confident that the less children learn in school, the better it is for them.

President, like most of his voters, does not believe in global warming, but he believes in free markets and low taxes. At the same time, he believes that the US domestic market should be protected from unfair foreign competition. Simply speaking: liberalism for “our own” protectionism for the “strangers”.

This is exactly how American capitalism was developing in the first third of the twentieth century!

Alas, the times have changed. Transnational capital, formed by the end of the twentieth century, has changed the rules of the game not only globally, but also at the internal market. These new rules brought the world to the current systemic crisis. The collapse of the neo-liberal world order is a spontaneous and natural process, generated by its own self-destructive logic, and not by the ideological views of anti-globalists or Trump. This process of decay has begun long before the arrival of the current President in the White House. The victory of Trump is itself a consequence of the crisis, which has already fully unfolded and penetrated into all pores of the society. To the dismay of liberal intellectuals in London, Moscow and New York, this decay is irreversible. In 2016, politics has finally synchronized with the economics.

The principal difference between the 45th US president and his liberal opponents is not that he does not believe in globalization, but that he is aware of its collapse, and therefore does not attempt to save the crumbling system, but seeks to build a new policy which would take the new reality into consideration. The question is: which direction this policy will take.

If the collapse of the old system is, to some extent, a natural process, at least at the economic level, the formation of a new social order does not happen automatically. As a consequence of his intent to reconsider the rules of the game, Trump is faced with the need to introduce his own positive program. And here he inevitably faces the objective contradiction between the interests of different social and economic groups which see the necessity of change.

Consistent implementation of protectionist policies intended to resore the internal market will not be effective without measures aimed at regulation and reconstruction of the US economy.

One may call for re-industrialization of the United States on the basis of market principles, but the nature of these principles objectively prevents them from resolving this problem. If the situation was different, not only the problem would have been already solved to a certain extent, but also Trump would probably not have had a chance to occupy the Oval Office at the White House.

Attempts to balance the budget at the expense of the import duties, while reducing taxes to encourage production without reducing profits of financial corporations and raise wages of workers without affecting the interests of entrepreneurs, sooner or later will lead US president’s policies to a logical impasse. It will be impossible to come out of it without making a political choice in favor of one party or another. Contradictions will only worsen as the government will have to make decisions on the matters of foreign policy, provoking disagreements and crises within the administration.

In fact, the contradictions of Trump’s policy reflect the contradictions within the broad cross-class coalition that brought him to the White House. No matter what the liberal pundits say, these were the votes of workers who brought him the victory. Not the so-called “white men”, but the working class, who openly and, largely, in solidarity, made a stand against the Washington establishment. To a large extent his election campaign reproduced the ideas and slogans of the Left. Republican candidate was supported by farmers, clerks and provincial intelligentsia. This really was an uprising of the forgotten and resentful provincial America against the spoiled people in California and the cosmopolitan officials from Washington, who comfortably exploit cheap labor of illegal migrants, against the liberal elite, who turned their back on their own country long time ago.

But Donald Trump is not a worker or a farmer. He and his entourage are very typical representatives of a medium size American enterprise which is tied to the domestic market and is in conflict with transnational corporations.

All groups that have supported him were equally offended and humiliated by the policies pursued by the metropolitan liberals and were interested in reconsideration of these policies. They all need protectionism. But at this point their unity ends. The interests of classes and groups, who led Trump to the White House, do not coincide in the positive part of the program.

On the one hand, the ability to unite a broad cross-class coalition around a single leader or a party has always been the main source of strength for the populist movements. On the other hand, the objective contradictions of class interests have invariably been their stumbling block. The long-term success, and often the physical survival of populist leaders have always depended on whether they were able to, by changing the configuration and maneuvering, prevent the collapse of the block they lead. Would the leader be able to reshape it on the go, making a choice in favor of the correct forces at the right moment? Sooner or later the necessity will arise not only to side with one part of his supporters against the other, but also to sacrifice many of his political friends, and sometimes even the interests of his own class.

Donald Trump will inevitably face such choices. Not just a place of 45th president in US history, but also his personal fate, which has potential to be more than dramatic, depends on when, how and for whose benefit he will make these choices. The political and institutional crisis of American society has gone too far. The country is split, and the old order, for the restoration of which the Liberals are clamoring, is not only impossible to restore, but receives blow after blow every day. And the organizers of the liberal opposition campaign are themselves smashing the very public institutions, which they previously have relied upon for their power.

In order to get rid of Trump, they need a coup. Whether this scenario will be tried in the hard (force) or soft (impeachment) variant, it would be a major blow to the institutions of American democracy.

It can be assumed with a good reason that the historic mission of Trump is the destruction of the existing liberal order. The positive work will be performed by other politicians and social movements. But these movements and leaders will only form in the struggle that is unfolding today. And how that happens, depends on the fate of Trump and the reforms initiated by him.

Institutional crisis, undermining the existing two-party system in the United States and the dominance of the Washington establishment, creates prospects for the left to participate in serious politics. The sudden success of Bernie Sanders in the primaries in 2016 demonstrated the possible scale of the opportunities. But the Left would only be able to use these opportunities on one condition – if it does not allow the Liberal circles to transform them into political extras fighting to protect the dying order. Otherwise, they will go to the bottom together.

The dangers of focusing all our attention on Donald Trump