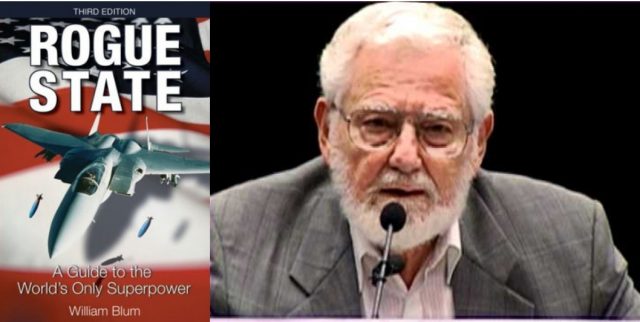 This article is a chapter from Rogue State: A Guide to the World’s Only Superpower by William Blum published in 2005.

How many Americans could identify the National Endowment for Democracy? An organization which often does exactly the opposite of what its name implies. The NED was set up in the early 1980s under President Reagan in the wake of all the negative revelations about the CIA in the second half of the 1970s. The latter was a remarkable period. Spurred by Watergate – the Church committee of the Senate, the Pike committee of the House, and the Rockefeller Commission, created by the president, were all busy investigating the CIA. Seemingly every other day there was a new headline about the discovery of some awful thing, even criminal conduct, the CIA had been mixed up in for years. The Agency was getting an exceedingly bad name, and it was causing the powers-that-be much embarrassment.

Something had to be done. What was done was not to stop doing these awful things. Of course not. What was done was to shift many of these awful things to a new organization, with a nice sounding name – The National Endowment for Democracy. The idea was that the NED would do somewhat overtly what the CIA had been doing covertly for decades, and thus, hopefully, eliminate the stigma associated with CIA covert activities.

It was a masterpiece. Of politics, of public relations, and of cynicism.

Thus it was that in 1983, the National Endowment for Democracy was set up to “support democratic institutions throughout the world through private, nongovernmental efforts”. Notice the “nongovernmental” – part of the image, part of the myth. In actuality, virtually every penny of its funding comes from the federal government, as is clearly indicated in the financial statement in each issue of its annual report. NED likes to refer to itself as an NGO (Non-governmental organization) because this helps to maintain a certain credibility abroad that an official US government agency might not have. But NGO is the wrong category. NED is a GO.

“We should not have to do this kind of work covertly,” said Carl Gershman in 1986, while he was president of the Endowment. “It would be terrible for democratic groups around the world to be seen as subsidized by the C.I.A. We saw that in the 60’s, and that’s why it has been discontinued. We have not had the capability of doing this, and that’s why the endowment was created.”

And Allen Weinstein, who helped draft the legislation establishing NED, declared in 1991: “A lot of what we do today was done covertly 25 years ago by the CIA.”

In effect, the CIA has been laundering money through NED.

In a multitude of ways, NED meddles in the internal affairs of numerous foreign countries by supplying funds, technical know-how, training, educational materials, computers, faxes, copiers, automobiles, and so on, to selected political groups, civic organizations, labor unions, dissident movements, student groups, book publishers, newspapers, other media, etc. NED typically refers to the media it supports as “independent” despite the fact that these media are on the US payroll.

NED programs generally impart the basic philosophy that working people and other citizens are best served under a system of free enterprise, class cooperation, collective bargaining, minimal government intervention in the economy, and opposition to socialism in any shape or form. A free-market economy is equated with democracy, reform, and growth; and the merits of foreign investment in their economy are emphasized.

From 1994 to 1996, NED awarded 15 grants, totaling more than $2,500,000, to the American Institute for Free Labor Development, an organization used by the CIA for decades to subvert progressive labor unions.  AIFLD’s work within Third World unions typically involved a considerable educational effort very similar to the basic NED philosophy described above. The description of one of the 1996 NED grants to AIFLD includes as one its objectives: “build union-management cooperation”.  Like many things that NED says, this sounds innocuous, if not positive, but these in fact are ideological code words meaning “keep the labor agitation down … don’t rock the status-quo boat”. The relationship between NED and AIFLD very well captures the CIA origins of the Endowment.

NED has funded centrist and rightist labor organizations to help them oppose those unions which were too militantly pro-worker. This has taken place in France, Portugal and Spain amongst many other places. In France, during the 1983-4 period, NED supported a “trade union-like organization for professors and students” to counter “left-wing organizations of professors”. To this end it funded a series of seminars and the publication of posters, books and pamphlets such as “Subversion and the Theology of Revolution” and “Neutralism or Liberty”.  (“Neutralism” here refers to being unaligned in the cold war.)

NED describes one of its 1997-98 programs thusly: “To identify barriers to private sector development at the local and federal levels in the Federal Republic of Yugoslavia and to push for legislative change … [and] to develop strategies for private sector growth.”  Critics of Yugoslav President Slobodan Milosevic, a socialist, were supported by NED grants for years.

In short, NED’s programs are in sync with the basic needs and objectives of the New World Order’s economic globalization, just as the programs have for years been on the same wavelength as US foreign policy.

NED’s Statement of Principles and Objectives, adopted in 1984, asserts that “No Endowment funds may be used to finance the campaigns of candidates for public office.” But the ways to circumvent the spirit of such a prohibition are not difficult to come up with; as with American elections, there’s “hard money” and there’s “soft money”.

As described in the “Elections” and “Interventions” chapters, NED successfully manipulated elections in Nicaragua in 1990 and Mongolia in 1996; helped to overthrow democratically elected governments in Bulgaria in 1990 and Albania in 1991 and 1992; and worked to defeat the candidate for prime minister of Slovakia in 2002 who was out of favor in Washington. And from 1999 to 2004, NED heavily funded members of the opposition to President Hugo Chavez in Venezuela to subvert his rule and to support a referendum to unseat him.

Additionally, in the 1990s and afterward, NED supported a coalition of groups in Haiti known as the Democratic Convergence, who were united in their opposition to Jean-Bertrand Aristide and his progressive ideology, while he was in and out of the office of the president.

The Endowment has made its weight felt in the electoral-political process in numerous other countries.

NED would have the world believe that it’s only teaching the ABCs of democracy and elections to people who don’t know them, but in virtually all the countries named above, in whose electoral process NED intervened, there had already been free and fair elections held. The problem, from NED’s point of view, is that the elections had been won by political parties not on NED’s favorites list.

The Endowment maintains that it’s engaged in “opposition building” and “encouraging pluralism”. “We support people who otherwise do not have a voice in their political system,” said Louisa Coan, a NED program officer.  But NED hasn’t provided aid to foster progressive or leftist opposition in Mexico, El Salvador, Guatemala, Nicaragua, or Eastern Europe – or, for that matter, in the United States – even though these groups are hard pressed for funds and to make themselves heard. Cuban dissident groups and media are heavily supported however.

NED’s reports carry on endlessly about “democracy”, but at best it’s a modest measure of mechanical political democracy they have in mind, not economic democracy; nothing that aims to threaten the powers-that-be or the way-things-are, unless of course it’s in a place like Cuba.

The Endowment played an important role in the Iran-Contra affair of the 1980s, funding key components of Oliver North’s shadowy “Project Democracy” network, which privatized US foreign policy, waged war, ran arms and drugs, and engaged in other equally charming activities. At one point in 1987, a White House spokesman stated that those at NED “run Project Democracy”.  This was an exaggeration; it would have been more correct to say that NED was the public arm of Project Democracy, while North ran the covert end of things. In any event, the statement caused much less of a stir than if – as in an earlier period – it had been revealed that it was the CIA which was behind such an unscrupulous operation.

NED also mounted a multi-level campaign to fight the leftist insurgency in the Philippines in the mid-1980s, funding a host of private organizations, including unions and the media.  This was a replica of a typical CIA operation of pre-NED days.

And between 1990 and 1992, the Endowment donated a quarter-million dollars of taxpayers’ money to the Cuban-American National Foundation, the ultra-fanatic anti-Castro Miami group. The CANF, in turn, financed Luis Posada Carriles, one of the most prolific and pitiless terrorists of modern times, who had been involved in the blowing up of a Cuban airplane in 1976, which killed 73 people. In 1997, he was involved in a series of bomb explosions in Havana hotels,  and in 2000 imprisoned in Panama when he was part of a group planning to assassinate Fidel Castro with explosives while the Cuban leader was speaking before a large crowd, although eventually, the group was tried on lesser charges.

The NED, like the CIA before it, calls what it does supporting democracy. The governments and movements whom the NED targets call it destabilization.

William Blum is an author, historian, and U.S. foreign policy critic. He is the author of Killing Hope: U.S. Military and CIA Interventions Since World War II and Rogue State: A Guide to the World’s Only Superpower, among others.