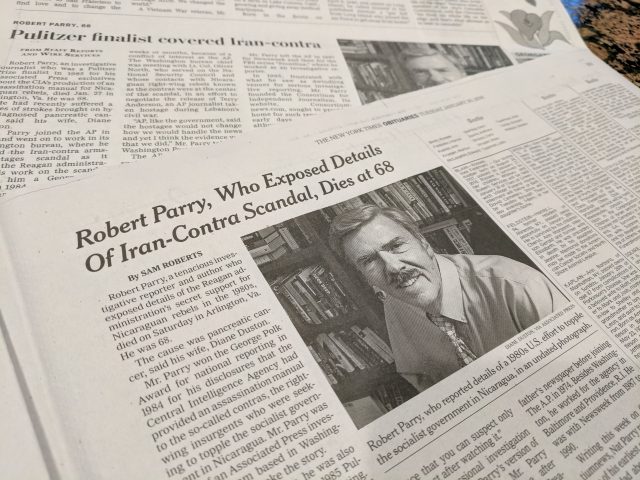 Robert (Bob) Parry was born in 1949 and died suddenly from pancreatic cancer in January 2018. An enthusiastic tribute to him and his work was recently held in Berkeley California. A video of the event is online here.

Although Robert Parry never became personally famous, many readers will recall news stories he played a key role in bringing to public consciousness. He uncovered the “Iran-Contra scandal” where the US secretly sold weapons to Iran via Israel with profits supporting mercenary “Contras” attacking the Nicaraguan government. He uncovered Lt. Col. Oliver North secretly working at the Reagan White House to supervise support for the Contras. He exposed CIA collusion with criminals sending weapons to the Contras and receiving tons of cocaine on return flights from Colombia and Central America.

In 1988, Parry co-authored an article which documented CIA and State Department activities to misinform the public to promote the desired public policy.

Next, Parry worked with the television documentary “Frontline” to uncover the “October Surprise”. That story involved Ronald Reagan’s election team clandestinely negotiating to delay the release of American hostages held in Iran. These stories appeared in mainstream media but were ultimately swept under the carpet.

The story about CIA complicity with drug-dealers was especially explosive because of the impact of drugs in poor communities across the US. There was an epidemic of cheap crack cocaine.

The story was initially ignored by the foreign policy and media establishment. But after two months of rising attention and outrage, especially in the African American community, a counter-attack was launched in the NY Times, Washington Post and LA Times. The LA Times alone assigned 17 reporters to what one reporter dubbed the “Get Gary Webb team”. They picked apart the story, picked apart Gary Webb’s personal life and distorted what he wrote. The attack succeeded. The Mercury News editors published a partial “correction” which was taken to apply to the whole story. Gary Webb was demoted and then “let go”. His reputation was destroyed and he ultimately committed suicide. A 2014 movie titled “Kill the Messenger”, made in consultation with Gary’s family and Bob Parry, depicts the events.

When the establishment media was going after Gary Webb, with the quiet encouragement of the CIA, many journalists were silent or joined the pack attack. Later, when an internal CIA investigation confirmed the veracity of Webb’s research and writing, they mostly ignored it. Robert Parry was one of the few national journalists to defend Gary Webb and his reporting from beginning to end.

At the Berkeley tribute, journalist Dennis Bernstein recalled being with Bob Parry and Gary Webb: “I remember the power that those guys had with audiences. It was easy to understand why people would be afraid of them. They were truth tellers.”

The Birth of Consortiumnews

As other western journalists were being pressured into compliance or driven out of the profession, Robert Parry chose a different path. Together with his oldest son Sam Parry, he launched the first investigative magazine on the internet: Consortiumnews. In his last article Bob Parry explained, “The point of Consortiumnews, which I founded in 1995, was to use the new medium of the modern internet to allow the old principles of journalism to have a new home, i.e., a place to pursue important facts and giving everyone a fair shake.”

For the past 23 years, Consortiumnews has published consistently high quality research and analysis on international issues. To give just a few examples: In March 1999, Bob Parry surveyed the dangers of the Russian economic collapse cheered on by Western neoconservatives while Mark Ames exposed the reality of Russian economic gangsters. In February 2003, Consortiumnews published the First Memorandum to the President by Veteran Intelligence Professionals for Sanity (VIPS) after Colin Powell addressed the UN Security Council. VIPS presciently warned of “catastrophic” consequences if the US attacked Iraq.

In 2005, Bob Parry exposed the bias and deception behind the rush to blame the Syrian government after Lebanese leader Rafik Hariri was assassinated. In April 2011, as the US was pushing to overthrow Gadaffi in Libya, Parry drew parallels to the disastrous consequences of overthrowing the socialist leaning Afghan government three decades earlier.

Beginning in 2014, Bob Parry exposed the dubious accusations regarding the downing of Malaysian Airlines MH-17 in Ukraine. Over the past two years, Bob Parry wrote and edited dozens of articles exposing the bias and lack of evidence behind “Russiagate”. A few examples can be seen here.

Commitment to Facts and Objectivity

Sam and several other speakers at the Berkeley Tribute noted that Robert Parry was not ideological. He believed in following the leads and facts wherever they led.  The new editor of Consortiumnews , Joe Lauria, said, “Bob was not a lefty radical… He was just reporting the facts and where they led. That turned out to be kind of a left wing position in the end because that’s what happens when you follow the facts wherever they go. But he didn’t start out from an ideological position or have a preconceived notion of what the story should be.”

Bob Parry’s investigations in the 1980’s revealed the U.S. administration plans and propaganda aiming to “glue black hats” on the Nicaraguan government and “white hats” on the Contra opposition. Thus he was well prepared to critically examine the disinformation campaigns accompanying “regime change” campaigns over the past decades: from Yugoslavia to Iraq, Libya, Syria, Ukraine and others.

Under Bob Parry’s leadership, Consortiumnews has exposed “fake news” at the highest levels. As journalist Norman Solomon said at the tribute, “It’s important to remember that the most dangerous fake news in the last few decades has come from the likes of the front page of the New York Times and Washington Post. There are a million dead Iraqis and many dead Americans to prove it.”

Bob Parry wrote several books including “Lost History: Contras, Cocaine, The Press and Project Truth” (1999), “Fooling America: How Washington Insiders Twist the Truth and Manufacture the Conventional Wisdom” (1992), and America’s Stolen Narrative: From Washington and Madison to Nixon, Reagan and the Bushes to Barack Obama” ( 2012).

In his last article , published just two weeks before his death, Parry informed Consortiumnews readers about his health issue. He speculated on possible contributing factors including “the unrelenting ugliness that has become Official Washington and national journalism.”

Parry described the decline in journalistic standards and objectivity. “This perversion of principles – twisting information to fit a desired conclusion – became the modus vivendi of American politics and journalism. And those of us who insisted on defending journalistic principles of skepticism and even-handedness were increasingly shunned by our colleagues, a hostility that first emerged on the Right and among neoconservatives but eventually sucked in the progressive world as well…. The demonization of Russian President Vladimir Putin and Russia is just the most dangerous feature of this propaganda process – and this is where the neocons and the liberal interventionists most significantly come together. The US media approach to Russia is now virtually 100 percent propaganda.

At the Berkeley event, writer Natylie Baldwin addressed this issue. In her presentation she said, “Robert Parry referred to the phenomena of careerism and group think. He argued that it was ruining journalism …When our most experienced academic expert on Russia, Stephen Cohen, can hardly get an interview on CNN and cannot get an op-ed published by the New York Times or the Washington Post, but a neo-con ideolog like Michael Weiss, who has no on the ground experience or educational credentials about Russia can be hired as a commentator by CNN on the subject, it’s dangerous. When someone like Rachel Maddow, who from her past investigative reporting knows better, has allowed herself to be used as a cartoonish purveyor of anti Russia propaganda, virtually ignoring coverage of more immediate issues facing average Americans and distracting them away from confronting the Democratic Party’s failures and dishonesty, it’s dangerous.”

Natylie Baldwin elaborated on the current critical situation and need for honest and objective journalism. She said, “Our media, like our political system, is in crisis. Indeed, these two crises reinforce each other as both our media and our political system are corrupted by money and have been largely reduced to a cheap spectacle. According to polls, large majorities of millennials have contempt for these establishment institutions. They’re open to and looking for alternatives to these broken systems. This makes Robert Parry’s legacy and the space for genuine investigative journalism that he fostered at Consortiumnews more important than ever.”

Joe Lauria said, “Bob was a skeptic but not a cynic – there’s a big difference.”

Sam Parry said, “Dad was a patriot. I think that he really loved America. He loved our ideals, he loved the people, he loved the idea of holding the institutions that govern us accountable. That was his passion. That was what he was all about and what really drove him and propelled him through his life.”

Australian journalist John Pilger wrote about Robert Parry: “His founding of Consortiumnews was a landmark. He was saying in effect, ‘We must not lie down in the face of media monoliths, the Murdochs, the liberal pretenders, censors and collaborators.’”

Bob Parry exposed the double standards and bias of mainstream media but maintained connections there. At the east coast Celebration of the life of Robert Parry, former neighbor, family friend and executive editor of the NY Times, Jill Abramson, made the understated but accurate summary: “Bob Parry certainly did his part to challenge the established order.”

Rick Sterling is an investigative journalist based in the San Francisco Bay Area, California.

How US Flooded the World with Psyops

Robert Parry’s Legacy and the Future of Consortiumnews

The CIA reads French theory: on the intellectual labor of dismantling the cultural left