Time for the International Left to Take a Stand on Venezuela 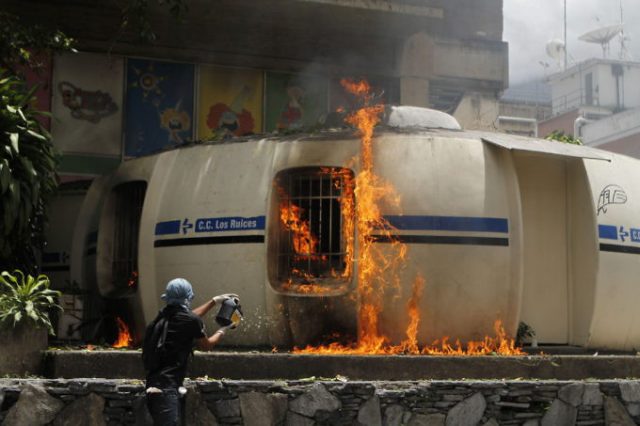 The mainstream media consistently fails to report who is instigating the violence in this conflict.

Venezuela is heading towards an increasingly dangerous situation, in which open civil war could become a real possibility. So far over 100 people have been killed as a result of street protests, most of these deaths are the fault of the protesters themselves (to the extent that we know the cause).

The possibility of civil war becomes more likely as long as the international media obscure who is responsible for the violence and the international left remains on the sidelines in this conflict and fails to show solidarity with the Bolivarian socialist movement in Venezuela.

If the international left receives its news about Venezuela primarily from the international media, it is understandable why it is being so quiet. After all, this mainstream media consistently fails to report who is instigating the violence in this conflict.

For example, a follower of CNN or the New York Times would not know that of the 103 who have been killed as a result of street protests, 27 were the direct or indirect result of the protesters themselves. Another 14 were the result of lootings; in one prominent case, because looters set fire to a store and ended up getting engulfed in the flames themselves. Fourteen deaths are attributable to the actions of state authorities (where in almost all cases those responsible have been charged), and 44 are still under investigation or in dispute. This is according to data from the office of the Attorney General, which itself has recently become pro-opposition.

In other words, it is possible that much of the international left has been misled about the violence in Venezuela; thinking that the government is the only one responsible, that President Nicolas Maduro has declared himself to be dictator for life (though he has actually confirmed that the presidential elections scheduled for late 2018 will proceed as planned), or that all dissent is punishable with prison (disputed by major opposition leader, Leopoldo Lopez – who was partly responsible for the post-election violence in 2014 – recently being released from prison and placed under house arrest).

If this is the reason for the silence on Venezuela, then the left should be ashamed for not having read its own critiques of the mainstream media.

All of the foregoing does not contradict that there are plenty of places where one might criticize the Maduro Government for having made mistakes with regard to how it has handled the current situation, both economically and politically. However, criticisms – of which I have made several myself – do not justify taking either a neutral or pro-opposition stance in this momentous conflict. As South African anti-apartheid activist Desmond Tutu once said, “If you are neutral in situations of injustice, you have chosen the side of the oppressor.”

Perhaps the Venezuelan case is also confusing to outsiders because President Maduro is in power and the opposition is not. It could thus be difficult to see the opposition as being an “oppressor.”

However, for an internationalist left, it should not be so confusing. After all, the opposition in Venezuela receives significant support not only from private businesses but also the U.S. Government, the international right and transnational capital.

Perhaps progressives feel that the Maduro Government has lost all democratic legitimacy and that this is why they cannot support it. According to the mainstream media coverage, Maduro canceled regional elections scheduled for December 2016, prevented the recall referendum from happening and neutralized the National Assembly.

Let’s take a brief look at each of these claims one by one.

First, regional elections (state governors and mayors) were indeed supposed to take place in late 2016, but the National Electoral Council (CNE) postponed them with the argument that political parties needed to re-register first. Leaving aside the validity of this argument, the CNE rescheduled the elections recently for December 2017. This postponement of a scheduled election is not unprecedented in Venezuela because it happened before, back in 2004, when local elections were postponed for a full year. Back then, at the height of President Hugo Chavez’s power; hardly anyone objected.

As for the recall referendum, it was well known that it would take approximately ten months to organize between its initiation and its culmination. However, the opposition initiated the process in April 2016, far too late for the referendum to take place in 2016 as they wanted. If it takes place in 2017, there would be no new presidential election – according to the constitution – and the vice-president would take over for the remainder of the term.

Finally, with regard to the disqualification of the National Assembly, this was another self-inflicted wound on the part of the opposition. That is, even though the opposition had won 109 out of 167 seats (65%) outright, they insisted on swearing in three opposition members whose election was in dispute because of fraud claims.

As a result, the Supreme Court ruled that until these three members are removed, most decisions of the national assembly would not be valid.

In other words, none of the arguments against the democratic legitimacy of the Maduro Government hold much water. Moreover, polls repeatedly indicate that even though Maduro is fairly unpopular, a majority of Venezuelans want him to finish his term in office, which expires in January 2019. As a matter of fact, Maduro’s popularity (24% in March, 2017) is not as low as several other conservative presidents in Latin America at the moment, such as that of Mexico’s Enrique Pena Nieto (17% in March, 2017), Brazil’s Michel Temer (7% in June, 2017) or Colombia’s Juan Manuel Santos (14% in June, 2017).

Now that we have addressed the possible reasons the international left has been reluctant to show solidarity with the Maduro Government and the Bolivarian socialist movement, we need to examine what “neutrality” in this situation would end up meaning – in other words, what allowing the opposition to come to power via an illegal and violent transition would mean.

First and foremost, their coming to power will almost certainly mean that all Chavistas – whether they currently support President Maduro or not – will become targets for persecution. Although it was a long time ago, many Chavistas have not forgotten the “Caracazo” – when in February 1989, then-president Carlos Andres Perez meted out retaliation on poor neighborhoods for protesting against his government and wantonly killed somewhere between 400 and 1,000 people. More recently, during a short-lived coup against President Chávez in April 2002 the current opposition showed it was more than willing to unleash reprisals against Chavistas.

Most do not know this, but during the two-day coup over 60 Chavistas were killed in Venezuela – not including the 19 killed, on both sides of the political divide, in the lead-up to the coup. The post-election violence of April 2013 left 7 dead, and the Guarimbas of February to April 2014 left 43 dead. Although the death count in each of these cases represented a mix of opposition supporters, Chavistas and non-involved bystanders; the majority belonged to the Chavista side of the political divide.

Now, during the most recent wave of guarimbas, there have also been several incidents in which a Chavista, who was near an opposition protest, was chased and killed because protesters recognized them to be a Chavista in some way.

In other words, the danger that Chavistas will be generally persecuted if the opposition should take over the government is very real. Even though the opposition includes reasonable individuals who would not support such a persecution, the current leadership of the opposition has done nothing to rein in the fascist tendencies within its own ranks. If anything, they have encouraged these tendencies.

Second, even though the opposition has not published a concrete plan for what it intends to do once in government – which is also one of the reasons the opposition remains almost as unpopular as the government – individual statements by opposition leaders indicate that they would immediately proceed to implement a neoliberal economic program along the lines of President Michel Temer in Brazil or Mauricio Macri in Argentina. They might succeed in reducing inflation and shortages this way, but at the expense of eliminating subsidies and social programs for the poor across the board. Also, they would roll back all of the policies supporting communal councils and communes that have been a cornerstone of participatory democracy in the Bolivarian revolution.

So, instead of silence, neutrality or indecision from the international left in the current conflict in Venezuela, what is needed is active solidarity with the Bolivarian socialist movement. Such solidarity means vehemently opposing all efforts to overthrow the government of President Maduro during his current term in office. Aside from the patent illegality that overthrowing the Maduro Government would represent, it would also literally be a deadly blow to Venezuela’s socialist movement and to the legacy of President Chavez. The international left does not even need to take a position on whether the proposed constitutional assembly or negotiations with the opposition is the best way to resolve the current crisis. That is really up to Venezuelans to decide. Opposing intervention and disseminating information on what is actually happening in Venezuela, though, are the two things where non-Venezuelans can play a constructive role.

Gregory Wilpert is the author of Changing Venezuela by Taking Power: The History and Policies of the Chávez Government (Verso Books, 2007)

The evidence of economic war against Venezuela