“This could be heaven for everyone” 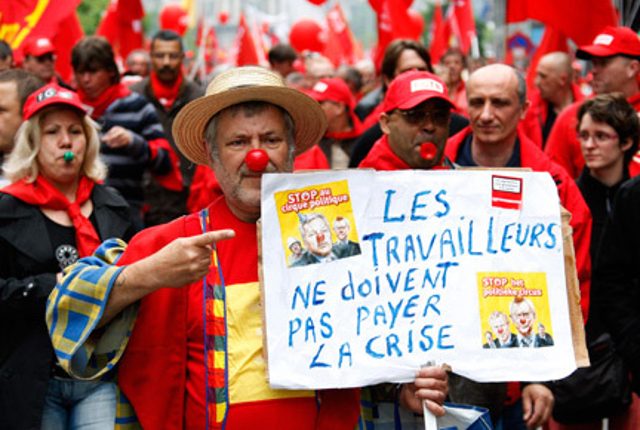 In Belgium, national wealth has reached unprecedented heights. Today, per capita, we are producing five times more than sixty years ago (1). This represents a potential income of € 8,650 per month and capital of € 785,000 for an average household of two adults and two children (2).

With such wealth, it should be obvious that we can all live without worry and in abundance. The material conditions for “heaven for everyone” are more than fulfilled.

But what does “heaven for everyone” mean?

Government benefits being raised above the poverty line. The daily fear of falling into poverty being a thing of the past. Today this fear affects 20% of Belgians!

Full employment and the unemployed no longer fearing that they will not make ends meet at the end of the month. In 2017, this remains a problem for 70% of the unemployed.

Ideally, the government mandated workweek would be 25 hours long with no pay cuts. But currently if actual employment were equitably distributed among the employed and jobseekers, then a 30 hour workweek would be needed to achieve this full employment. A private sector worker, other than those who work in finance, has a significant share of the value they create stripped away. It represents about 43% of the total value they create, which goes into the pockets of the employer or shareholders, with approximately a quarter to a third, going to the state, in the form of taxes on corporate profits. He or she then works fifteen hours “for free” for his or her boss. If we reduce these hours to ten—still good for profits and incomes for the employer or its shareholders—the workweek could be further reduced by five hours to a 25-hour workweek (3).

A 25-hour week is not at all radical. Maynard Keynes, one of history’s most famous economists, predicted as early as 1930 that his grandchildren would only need to work 15 hours a week to have a decent standard of living. (4).

People can retire at age 65 and there are dead-end jobs available for people 55 years and older. Increasing productivity can easily absorb aging. In the last decade, aging has cost 1.4 percentage points of GDP, around negative 0.2 percentage points per year. Annual growth is multiple times larger.

From now on, non-EU citizens living in EU countries no longer living in poverty. Today it is the case for 70% of them! There would also be no underemployment, or lack of services and housing, which would remove tensions between various population groups.

No more problems with healthcare bills. No one delaying visiting the doctor or buying prescription drugs for lack of money. Today, 26 and 88% of Belgians, respectively suffer from this. (5).

The “kiwi model” saves $2 billion in prescription drug costs (6). Remunerating specialist doctors in a “normal” way, for example by giving them the salary of a university professor, can save another $ 2 billion. Avoiding unnecessary hospital visits by abolishing the “fee-for-service” system could save an extra 0.8 billion. These measures would be largely sufficient to solve the medical deficit.

Public education having sufficient means and staff and again being at the top of the world rankings. The delay in building schools, which today amounts to 2,500 schools in Flanders, would be eliminated.

Everyone being able to pay their rent, heat their home and afford to prepare a meal every other day with meat, poultry or fish. Today this is not the case for 5% of the population.

Any household would be able to put some pennies aside for their old age or for the children. This is impossible today for 40% of households.

Everyone could go on vacation without worry. Currently 27% of households can’t.

The energy giants being held responsible for climate change goals. That’s why they would be in the public sector. They would have gone en masse with green energies. In addition, an extensive investment program—public transport, insulation, CO2 capture and storage, etc. would be working to achieve the climate goals agreed to in Paris in time.

Not enough money for all this?

Belgian corporations and the rich simply do not know what to do with their mountains of cash. In the last three years, they have moved more than 300 billion euros to tax havens (8). With 1 billion euros, one could employ 30,000 people for a whole year (9). Calculate what you could do with even a fraction of that amount. The 10 richest families in our country hold together a capital of 42 billion euros, almost as much as the 2 million poorest Belgians.

Never before has the gap been as large as today between what is possible and what is actually achieved. In other words, given the high level of prosperity in our society, it is a real scandal that so many people can’t meet their basic needs.

Indeed, this world could be heaven for everyone, but for many, for far too many people, it is unfortunately a hell on earth. It’s time to hit the reset button. Or in the words of Jacques Brel: “The greatest form of madness is to accept this world as it is and not to fight for the world as it should be” (10).

(2) Net disposable income in Belgium is $ 28,700 per person on an annual basis. For a household with two children and two adults, that net imposable income is 8,650 euro per month. http://www.oecdbetterlifeindex.org/countries/belgium/ The total net capital (financial and non-financial) amounts to some 2,220 billion euros. Figures are from 2014 and 2015. Sources: https://www.nbb.be/doc/dq/n/dq3/histo/nndc15.pdf p. 119 and http://moneytalk.knack.be/geld-en-beurs/sparen/in-deze-landen-hebben-de-inwoners-het-hoogste-nettovermogen/article-normal-755253.html.

(3) Source of the ratio between staff costs and “added value”: http://economie.fgov.be/nl/binaries/analyse-Structurele%20ondernemingsstatistieken_nl_tcm325-244851.pdf, p. 4

(6) The kiwi model is based on the New Zealand’s approach: public bids are issued for the best drugs. The full application of the kiwi model can lower the drug prices by 50 to 90% in Belgium. https://ptb.be/articles/le-modele-kiwi-pour-les-nuls

(9) A job costs around 50,000 euros a year. We come up with 20,000 jobs per billion euros. With the tax return effect, the social security levies on the one hand and fewer benefits on the other hand, we can easily reach 30,000 or more jobs. In addition, these new jobs are boosting the economy.

Translated from French by Stéphane Rouilly