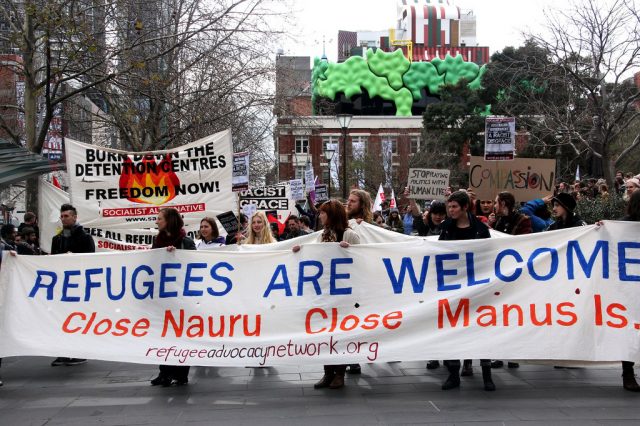 In 1951, member states of the United Nations approved a convention on refugees. The point of that convention was limited – to ensure that refugees from World War II were not treated unjustly. Gradually, the term ‘refugee’ would expand. The West began to use the term to define those who fled the USSR and Eastern Europe, but not those who fled colonial wars from Eastern Africa to South-East Asia. A 1967 Protocol set aside the limitations of space and time, calling for refugees to be defined ‘without any geographic limitation’.

Anyone who is displaced, by this logic, is a refugee. There are currently 66 million people who have been forcibly displaced, the bulk of them living in their countries of origin with 22.5 million registered formally as refugees. In 2016, a mere 189,300 refugees were resettled in other countries. The rest sit in camps or are at the edge of the international system.

It is well worth pointing out that each day close to 30,000 people are forcibly displaced from their homes.

The countries of wealth, the old colonial states, from the United States to Australia, have developed a common plan to deal with the refugee crisis. They are building off-shore camps, outsourcing the refugee problem to states that are willing to be paid to set up barriers for the free movement of people.

Take the cases of Manus Island (Papua New Guinea) or Penas Blancas and Paso Canoas (Costa Rica), or indeed of the Sahel region of Africa and Turkey. In all four places, the West has financed the creation of military forces and concentration camps to hold desperate migrants who are fleeing hunger and war.

Manus Island: Since 2013, the Australian government has forcibly transferred asylum seekers to Manus Island, which is north of the main island of Papua New Guinea. On this island, the migrants are held in camps, where – as the UN Refugees Agency (UNHCR) put it – the migrants suffer high rates of depression and PTSD. Torture is apparently rife at these camps, as is shown by a Human Rights Watch report from last year. When New Zealand offered to resettle the migrants who are in these camps, Australia declined. It said that if it sent the migrants to New Zealand, this would provide a ‘back-door way to get into Australia’.

Penas Blancas and Paso Canoas: Makeshift camps and a Red Cross center hold undocumented migrants in Costa Rica. The conditions in these camps are, as the International Organization of Migration shows, abysmal. These are migrants who want to travel to the United States, but are being blocked from entry into Nicaragua. Why is Nicaragua not allowing them into the country, since they are merely seeking to transit its territory? US Ambassador to Nicaragua Laura Dogu said, ‘Each country controls its borders and as we are doing that in the United States, Nicaragua has a right as well and we are supporting Nicaragua in this regard. That is a political decision’. This is a revealing statement. The United States supports – even encourages – Nicaragua to shut its border to these migrants. It is far easier for the US to have Nicaragua be its border guard than ‘build the wall’ on the US-Mexico border.

Sahel: France’s G5 Sahel Initiative brings five African countries (Burkina Faso, Chad, Mali, Mauritania and Niger) into a project to block migrants who are seeking to cross the Sahara Desert and the Mediterranean Sea to reach Europe. The point of the Initiative – helped along by a US drone based in Agadez (Niger) – is to stop the migrants far from the actual border of Europe, to keep these people out of sight. A new Cambridge University study by Paolo Campana finds that the UK’s attempt to stop migrants in the Mediterranean Sea is futile. Since it is futile to build the barrier in the Mediterranean, the European states have sought to build it on the other side of the Sahara.

Turkey: Over the course of 2015 and 2017, several countries in Eastern Europe began to construct fences and to refuse to allow migrants to go through their countries. Hungary and Slovakia took the European Union to court for not going along with the border closure option. Countries along the Balkan route from Turkey to Germany took the strongest position against the migration. Although even here, the rest of Europe was not entirely open to refugees and migrants. France’s crackdown at the Calais Jungle camp in October 2016 sent a strong message that these refugees and migrants are simply not welcome. Europe signed a deal with Turkey for the latter to hold these refugees and migrants rather than deliver them to the rest of Europe. The European Union promised to pay €3 billion to Turkey, but these funds have not been turned over. Nonetheless, they reveal the general strategy: pay for the countries on the perimeter of the West to hold the refugees and migrants.

What the countries of Europe, the United States and Australia have done is to export their borders far from their own territory and to make sure that the harsh interdiction of refugees and migrants is done outside the light of their own media. This is a kind of arms-length outsourcing of the refugee crisis: the West gets to drive its terrible anti-migrant policies, but it at the same time gets to appear innocent as its subsidiaries do the dirty work for it.

It is time for the countries of the Global South – the G77 bloc in the United Nations – to call for a new convention on refugees. Too much is left out of the current global framework, too little importance is paid to it. This policy of outsourcing the refugee crisis and using armed force to tackle the migrants needs to be stopped. The spirit of the 1951 Refugees Convention is no longer being honored.

The right to peace, the right to wage war and the ‘law’ on warfare: Western amnesias and fluctuations