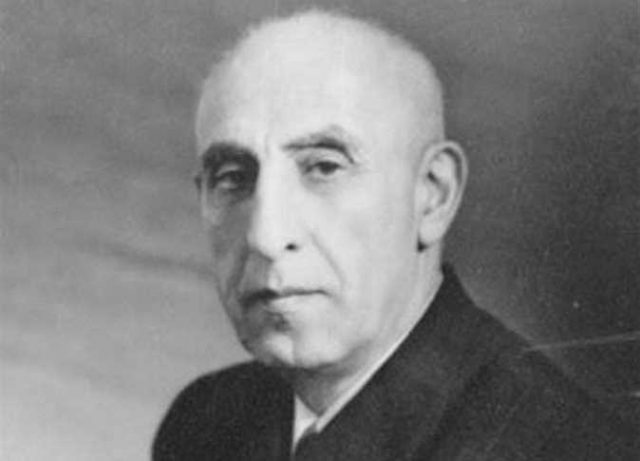 After WWII, the West had one huge ‘problem’ on its hands: all three most populous Muslim countries on Earth – Egypt, Iran and Indonesia – were clearly moving in one similar direction, joining group of patriotic, peaceful and tolerant nations. They were deeply concerned about the welfare of their citizens, and by no means were they willing to allow foreign colonialist powers to plunder their resources, or enslave their people.

In the 1950’s, the world was rapidly changing, and there was suddenly hope that the countries which were oppressed and pillaged for decades and centuries by first the European and then North American geopolitical and business interests, would finally break their shackles and stand proudly on their own feet.

Several Communist countries in Eastern Europe, but also newly liberated China, were actively helping with rapid de-colonizing process in Africa, Asia, the Middle East and other parts of the world.

Those developments were exactly what the West in general and both the U.K. and the U.S. in particular, were not ready or willing to accept. ‘Ancient’ belief in some sort of ‘inherited right’ to colonize, to loot and to control entire non-white world, was deeply engraved in the psyche of the rulers in both Europe and North America.

Peaceful, tolerant and socially oriented Islam was seen as a tremendous threat, at least in London, Washington, and Paris. It had to be stopped, even destroyed – resolutely and by all available means. Only the pre-approved Wahhabism, which was collaborative with the West and from the onset at least partially ‘co-produced’ by the British Empire, was singled-out and allowed to ‘bloom and succeed’.

Actually, it did not fall; it was brutally destroyed.

According to the logic of the Empire, Iran had to be derailed and ruined, in order to prevent so-called ‘domino effect’.

As written by Irfan Ahmad, an Associate Professor of Political Anthropology at Australian Catholic University, Melbourne and author of “Islamism and Democracy in India”:

“…Major theatre of de-democratization was Iran, whose elected government was overthrown, in 1953, by a US-UK alliance. Mohammad Mosaddeq was Iran’s elected prime minister. He enjoyed the approval of Iran’s parliament for his nationalization program. The US and UK organized a CIA-led coup to oust Mosaddeq – because Iran refused make oil concessions to the West. During World War II, the UK had taken control of Iran to prevent oil from being passed to its ally, the Soviet Union. Through the Anglo-Iranian Oil Company, the UK continued to control Iran’s oil after the war. The French-educated Mosaddeq was highly critical of Iran’s draining of resources to the West. Soon after getting elected as prime minister in March 1951, Mosaddeq and his National Front alliance had moved to nationalize Iranian oil and throw out foreign control of oil fields. One such was the Abadan refinery, then the largest in the world. The UK retaliated by imposing economic sanctions, backed by its heavy naval presence in the region. Mosaddeq, however, was undeterred; his popularity only increased among the Iranian people. Faced with Mosaddeq’s resistance, the UK-US alliance staged a coup to over throw Mosaddeq’s government.”

Egypt was next. France, the U.K. and Israel attacked it, in 1956, during so-called “Suez Canal Crises”. Although the invasion eventually ended and Canal stayed in the hands of Egypt, the country never fully recovered. There were further Israeli attacks and invasions, and after President Gamal Abdel Nasser passed away in 1970, gross meddling in Egypt’s internal affairs by the Western countries. Gradually, Egypt was turned into an impoverished client state.

In Indonesia, a progressive and religiously tolerant President Ahmed Sukarno was overthrown more than a decade after Mohammad Mosaddeq in Iran. The coup took place in 1965, with direct involvement of the United States. Between 1 and 3 million people were brutally slaughtered.

Sukarno’s main ‘sins’, at least in the eyes of the Western Empire, consisted of strong left wing, patriotic stands, which included nationalization of almost all natural resources. Sukarno was also one of the founding fathers of non-aligned movement.

By the end of the 1960’s, socialism in the Muslim countries had been almost thoroughly demolished. Dark era of collaboration, particularly in the [Persian] Gulf region, arrived. 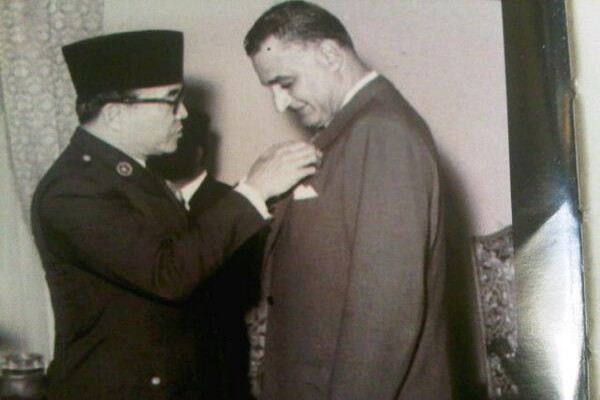 The 1953 coup in Iran was later replicated in various parts of the world, even as far as Latin America.

For years it is has been no secret that the U.S and the U.K. planned and executed this deadly event.

In its article, CIA admits role in 1953 Iranian coup, published on 19 August 2013, The Guardian reported:

“The CIA has publicly admitted for the first time that it was behind the notorious 1953 coup against Iran’s democratically elected Prime Minister Mohammad Mosaddeq, in documents that also show how the British government tried to block the release of information about its own involvement in his overthrow.

On the 60th anniversary of an event often invoked by Iranians as evidence of western meddling, the US national security archive at George Washington University published a series of declassified CIA documents.

“The military coup that overthrew Mosaddeq and his National Front cabinet was carried out under CIA direction as an act of US foreign policy, conceived and approved at the highest levels of government,” reads a previously excised section of an internal CIA history titled The Battle for Iran.”

Declassified, U.S Department of State “Top Secret” documents from 1952, also clearly demonstrated great appetite of the U.K. to perform the coup in Iran:

“Subject: Proposal to Organize a Coup d’etat in Iran

“The British foreign Office has informed us that it would be disposed to attempt to bring about a coup d’état in Iran, replacing the Mosadeq Government by one which would be more “reliable”, if the American government agreed to cooperate…”

Although the U.S. government was originally hesitant about supporting the U.K. in planning to overthrow Prime Minister Mohammad Mosadeq, it soon changed its mind and allowed the CIA to plot and execute the coup.

What followed was 26 years of perversely brutal rule of Shah Reza Pahlavi, as well as of the British-US control over almost all great natural resources of Iran.

In brief: the West performed an experiment on Iran and on its people: how would the country react to a bloodbath, to overthrowing of its popular leader, to a theft of its resources? 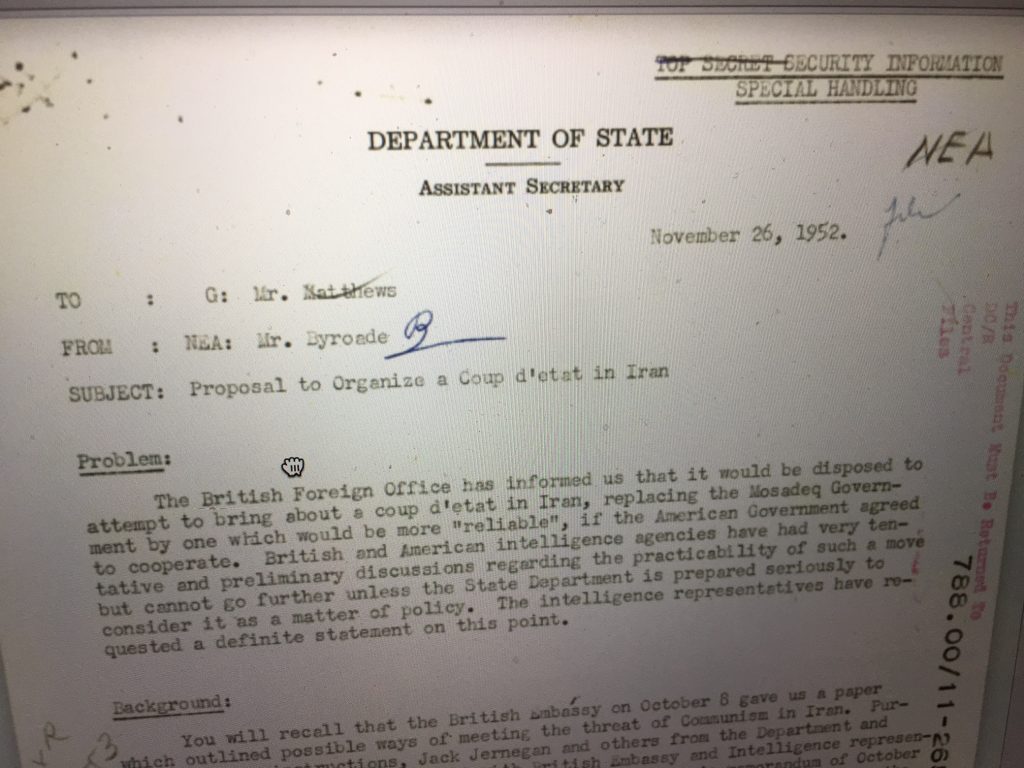 As it did for centuries, the U.K. ‘scored’: it correctly predicted that it would be able to ‘get away with murder’. It managed to convince its offspring, the United States, that huge international crimes pay, as long as they are committed barefaced.

And the US industrialized these crimes, as it earlier did production of automobiles or radio sets. Crimes got mass-produced. One ‘inappropriate’ government after another got overthrown, destroyed; all over the world: Congo, Dominican Republic, Guatemala, Chile, Brazil, Indonesia, Vietnam… Crimes were piling up, and still are.

1953 in Iran marked the beginning of a ‘new chapter’ in the world history – a terrible and brutal chapter.

Iranian people and Iranian leadership are well aware of it. The country that suffered so much, the country which lost hundreds of thousands of its sons and daughters to Western imperialism, geopolitical games as well as naked greed, is now standing tall and strong, unwilling to surrender or to even budge.

It wants to go forward, it is going forward, but in its own direction, at its own pace, for the benefit of its people.

Iran is not alone. There is now an entire powerful alliance in place, consisting of countries from all over the world: an alliance of those who are not afraid to confront deadly expansionism and consequent terror. From Bolivia to China, from South Africa to Russia, Syria, Venezuela and the Philippines, people are remembering Iran of 1953, determined to defend their countries and the world against the greatest evil, which is imperialism!