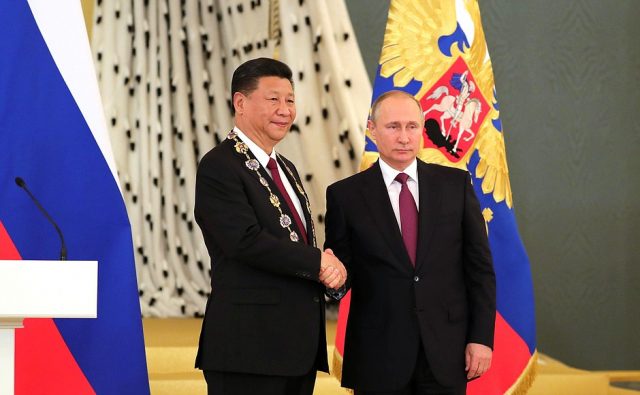 The insanity and vileness of Western anti-Chinese propaganda used to make some of my Chinese friends cry late at night. But things are changing. The lunacy of what is said and written about China (and Russia, of course), in the US and Europe, is now clearly reflecting frustration and the bad manners of sore losers. One could almost be inclined to pity the Western empire, if only it wasn’t so violently murderous.

The Empire’s propagandists are pitying nobody – they are now shooting like maniacs, but without any coherent plan.

Various Western ‘experts’ and journalists cannot really agree on the basics: ‘what is really wrong with China’. But they are paid extremely well to find new and newer skeletons in the huge Chinese closets, and so they are constantly competing with each other, looking for the juiciest and the most scandalous stories. Often it appears that it pays to assume that absolutely everything is flawed with the most populous, and on top of it, Communist (with the ‘Chinese characteristics, of course) country on earth!

China will end extreme poverty by 2020, but do not look for cheers and applause from Berlin, Paris, London and Washington. China is far ahead of all the large countries on earth in building a so-called ‘ecological civilization’, but who is willing to notice? China is constructing public parks, boardwalks and playgrounds, the biggest on earth, but who cares? The Chinese government is introducing sweeping educational reforms, while flooding the entire nation with concert halls, museums and theatres. But that’s not worth mentioning, obviously!

Western propaganda tries to discredit China literally from both ‘left and right’, sometimes accusing it for being too Communist, but when it is suitable, even for ‘not being Communist enough’.

The New York Times ran a cover-page story on October 5, 2018, “Unlikely foe for China’s leaders: Marxists”. For this highly sarcastic piece, a reporter visited the Chinese city of Huizhou, from where he wrote about a group of over-zealous young Marxists who are demanding things to be as they were in Mao’s days:

“But the Huizhou activists represent a threat the authorities did not expect.”

Seriously? A threat? China is moving towards Communism, again, under the current leadership. We are talking about democratic, socially-oriented Communism. But let us not argue with the official U.S. newspaper. It is definitely not a pro-Communist publication, but they had to show some sympathy (by running a cover story!) to a small bunch of over-zealous ‘opposition’ Marxists, just to spread doubts among the readers, suggesting that the Chinese government is not that Red, anymore.

The next day (Saturday-Sunday edition, October 6-7, 2018), the same New York Times published two cover stories on China. One was along its usual anti- Chinese and anti-Russian conspiracy lines “Will China hack U.S. mid-terms?”, but the other basically contradicted the story from the previous day, accusing Beijing this time of cutting the wings of private companies: “Beijing is pushing back into business”, with a sub-title:

‘Wherever it can hurt China, just write it’, could be the credo of thousands of European and North American journos: ‘as long as the news about or from China is bad, really dark and negative, anything goes!’

Too much Communism, or too little… As far as the West is concerned – China can never get it right! Because… simply because it is China, because it is Asia, and because it waves the red flags.

And so, The New York Times ran two totally contradictory stories. An editorial blunder, or a pre-meditated attempt to inflict maximum damage, by kicking ‘left and right’?

It is, of course, fun, to follow this propaganda trend, ‘from a safe distance’ (meaning: ‘not believing a word of what it says’). But what is happening is not a joke. What is being done can actually be deadly. It can trigger, unexpectedly, a chain of events that could truly hurt China.

‘An explosion’ could originate in Taiwan, in Southeast Asia, or from the PRC territory itself.

Look at Brazil, look at Venezuela! Look at all those Color Revolutions, Umbrella Revolutions, ‘Springs’ from Europe to Arab countries. And look at China itself: who triggered, who sponsored the so-called Tiananmen Square events? There is clearly enough evidence, by now, that it was not some spontaneous student rebellion.

The West has convinced several countries such as the Philippines, that they should confront China, through various territorial claims in which, honestly, almost no serious Filipino historian or political scientist is ready to believe (unless he or she paid royally from abroad). I talked directly to several top historians and political scientists in Manila, and I got a clear picture of whom and what is behind those territorial claims. I wrote about it in the past, and soon will again.

China is too big to tolerate dangerous subversions from abroad. Its leadership knows well: when the country is in disarray, hundreds of millions of human beings suffer. To preserve the nation’s territorial integrity is essential.

So, what is China really in summary?

It is a Communist (or you may call it a socialist) country with thousands of years of a great and comparatively egalitarian history. It has a mixed economy but with central planning (government tells the companies what to do, not vice-versa). It is clearly the most successful nation on earth when it comes to working on behalf of, and for the benefit of its citizens. It is also the most peaceful large nation on earth. And here are two more essential points: China is at the forefront of saving the world from the looming ecological disaster. And it has no colonies, or ‘neo’-colonies, being essentially an ‘internationalist’ state.

Its political system, economy, culture: all are diametrically different from those in the West.

China has millions of things to say about how this planet should be governed, how it should be marching forward, and what is true democracy (rule of the people).

Now honestly: does Western mainstream, which manufactures ‘public opinion’ all over the world, allows many Chinese (PRC) patriots, Communists, thinkers, to appear on television screens, or to write op-eds?

We know the answer. Almost exclusively, it is the Westerners who are, (by the Western rulers) entrusted with the tremendous task of ‘defining what China is or isn’t’. And what the entire world is or isn’t.

If China says that it is ‘socialist with Chinese characteristics’, they say ‘No!’ with their perfect Oxford accents. And their arrogance from telling the greatest civilization on earth what it actually is or isn’t, gets accepted because of the fact that most of them are white, and they speak perfect English (paradoxically, still a seal of trustworthiness, at least in certain circles).

The West never hears what the Chinese or Russians think about the world. While the Chinese and Russians are literally bombarded by what the West thinks about them.

The spread of Western propaganda and dogmas used to appear as a battle, an ideological combat, for Chinese and Russian brains (if not for hearts). Or at least it appeared as such, to many naïve, trusting people.

Now it is all much simpler and ‘in the open’: the battle continues, but the frontlines and goals have shifted. How?

What is taking place these days, is simply an enormous clash between Western imperialism plus its propaganda, versus the determination of the Chinese and Russian people to live their own lives the way they choose. Or to put it into even simpler terms: the battle is raging between Western imperialism on one side, and democracy with ‘Chinese and Russian characteristics’ on the other.

The West is bashing China and Russia ‘left and right’, literally. But it is definitely not winning!

Propaganda! Pardon me, is mine really bigger than yours?

Why the West cannot stomach Russians

Even in revolutionary countries, mass media is still in the hands of the right