The Venezuela ‘Opposition’ We Never Hear About 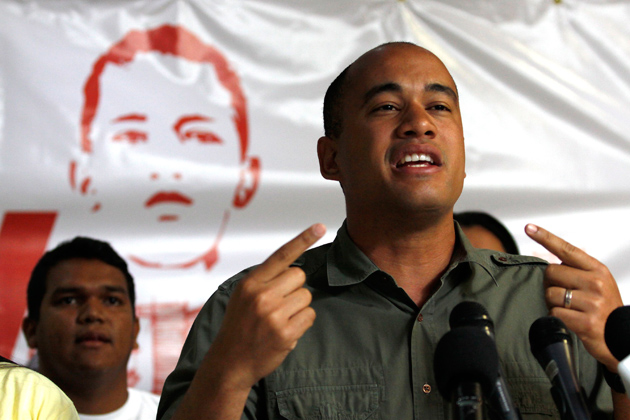 This “opposition” has loyalties that lie with the Bolivarian Revolution and nothing else.

At 35 years of age, he is tall and slim, and his imposing stature moves about in a subtle swagger that exudes confidence tempered with a humility that does not succumb to his good looks and natural charisma. As a deputy, he is the leader of a block of 55 deputies in the Venezuelan National Assembly. From all appearances, his personality and the important position he holds should attract the sensation-seeking U.S. corporate media that hangs on to every word and is so eager to capture images of the deputies and their supporters to make a “story.”

There is, however, a problem for them and for Washington. Héctor Rodríguez is the leader of this minority block of 55 Chavista-led deputies, Bloque de la Patria, which is an outcome of the Dec. 5, 2015 legislative election that saw the ruling socialist party, the PSUV, lose its majority in the National Assembly.

Rodríguez opposes the majority in what has become a bourgeois national assembly, to paraphrase the words that Nicolás Maduro used in a talk in Caracas to national and international guests on March 7, 2017.

In the U.S. Congress, depending on its composition, the minority Democrats or Republicans oppose the majority. However, this “opposition” is always within the framework of the capitalist status quo, preserving the racist state as a vestige of slavery, negating the genocide of the Indigenous peoples (which is still under way in different forms) and sacrificing the working people on the altar of capitalist globalization, which itself is a key component of a foreign policy based on imperialist aggression and wars.

In parliamentary systems, such as in Canada and Britain, the establishment consensus adds a shameful British slant to the “opposition” charade, which would be a comedy if it were not so tragic. In these other countries in the North, the “loyal opposition” (as they are actually formally recognized) can feel free to oppose as long as they are loyal to the head of state, which in both Canada and Britain is the Queen of England. 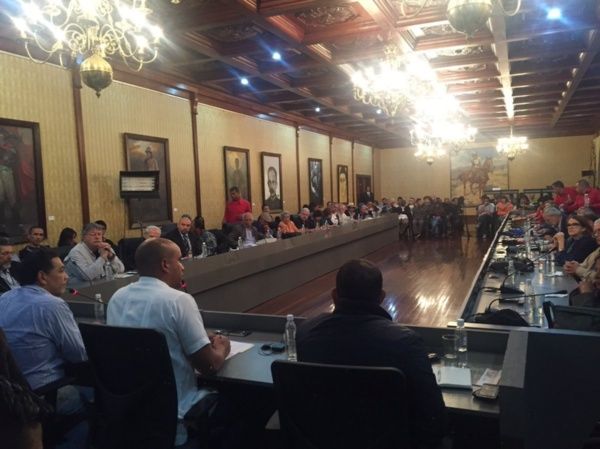 “Extraordinary meeting with leaders of different nationalities! Only united will we build a just world! Count on our solidarity!” Source: Twitter of Hector Rodriguez

However, Rodríguez’s loyalty lies with the Bolivarian Revolution and nothing else. On March 6, in Caracas, he participated in a more intimate meeting with delegates of the international Network of Intellectuals, Artists and Social Movements in Defense of Humanity. It took place in a small hall in the Foreign Affairs building. During the course of this encounter, an exchange between the participants and the deputy naturally evolved. It was so engrossing that the banal act of taking notes would have failed to do justice to the content or the style in the best Chavista tradition exhibited by Rodríguez, which is also increasingly being demonstrated by President Nicolás Maduro and other leaders.

The discussion covered many themes. One, for example, was an incredibly lucid explanation of the view that the Bolivarian Revolution, which the block of deputies are part of, is based in words and deeds on opposition to U.S. imperialism and capitalism. While the Revolution is flexible in terms of tactics, for example, in negotiating with the majority pro-capitalist, pro-U.S. force in the National Assembly in order to strive for a peaceful solution to the crisis, when it comes to the question of principles and objectives, there is no compromise possible.

No wonder that those in the North, who rely on the corporate media, never hear about this “opposition” as personified in Rodríguez. This censorship takes place even though the establishment media must be in dire straits in the hunt for a new face to replace the bland dinosaur-type politicians in the National Assembly. Washington and its media would rather sink into the swamp of Venezuelan political oblivion, even though they should pay formal attention to the “opposition” as they do so faithfully not only in other countries but also, of course, in the U.S. Congress. If they ever decide to focus on Venezuela’s opposition to the National Assembly majority, Rodríguez and other such deputies would no doubt steal the show.

Another distinguishing feature of the Bolivarian Revolution opposition is that its rejection of the status quo is defined more by what it is in favor of than what it is against. The goals of the Bolivarian Revolution comprise social and economic equality, housing, food, health, education, culture, sports and a participatory and protagonist democracy, the very essence of which is blocked by imperialism and the neoliberal status quo.

Those of us who came of political age in the 1960s felt right at home as the deputy zeroed in on the imperialists, gringos and Yankees while making crystal clear what we already know. The conflict is not with the people of the U.S., who were duly represented in red those days in Caracas, but rather with the ruling circles who, as Martí and Bolívar said in their own respective ways, are destined to plague the peoples of Latin America and the Caribbean with hardship and misery.

Moreover, the U.S. is doubling-down on its reprehensible destiny as the peoples in the South strive to finally break free from the shackles of the most forceful and aggressive military and economic power in the history of mankind (or surely since the fascism of WWII), represented by Republicans and Democrats. Thus, it was encouraging to hear President Maduro on that memorable evening in Caracas telling the truth: Venezuela has not been attacked by any U.S. president as much as during the eight years of Obama. Let that sink in.

In this context, the intransigent Bolivarian opposition to U.S. imperialism is no small matter. Venezuela, at the forefront of anti-U.S. imperialism today, is thus writing another chapter in modern world history, as the Cuban Revolution and Fidel Castro have done in safeguarding their sovereignty, dignity and the social system they have chosen.

For his part, Rodríguez walked the audience very carefully and deliberately, repeating as if to test our determination (and looking us in the eyes), that while the battle is at present still mainly in the realm of ideas, if necessary – if necessary – Venezuela will also fight militarily. There is no doubt that if forced to do so, the Bolivarian Revolution will resist in this way as well. This is why all of humanity must today more than ever stand with Venezuela

During the course of the exchange with Rodríguez, what stands out is his deep political conviction illuminated by clarity in theory. This is not merely manifested by ideas and words. When ideas and words combine with action, they become a material force in society. Material force means that the ideas become an organic part of society: the ideas in the minds of individuals such as Rodríguez and other leaders and activists at all levels are socialized and thus evolve into a common movement replete with diversity. Yes, diversity – but always and only within the wide framework of broad-based Chavismo.

Thus, the minority in the National Assembly — and perhaps still a minority of 40 percent, or even half of the population in the shifting sands, of Venezuelan society – represents the future of Venezuela and that whole region. A material force such as the Bolivarian Revolution cannot be snuffed out. Yes, it can suffer setbacks, but it cannot be eliminated.

Nevertheless, Chavismo is not an electoral movement but a revolution in the making and constantly redefining itself. It does so to the extent of fearlessly organizing revolutions within the revolution, striving to carry this out in conjunction with the people and activists at all levels. With this fresh approach so singularly characteristic of the Bolivarian Revolution, the irresistible material force of socialism to replace capitalism and foreign dependence increasingly takes root and grows in Venezuelan society and on its political scene.

Arnold August, a Canadian journalist and lecturer, is the author of “Democracy in Cuba and the 1997–98 Elections” and, more recently, “Cuba and Its Neighbours: Democracy in Motion” which explores Cuba’s relationship with the U.S., Venezuela,Bolivia and Ecuador. He is a collaborator of teleSUR English. Arnold can be followed on Twitter @Arnold_August and Facebook.