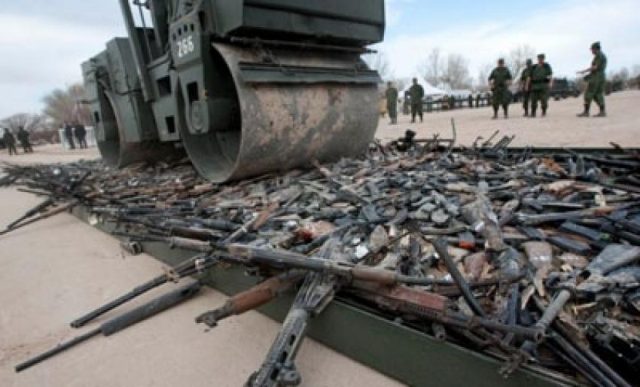 I live next door to the world’s largest gun manufacturer. Here in Mexico, the murder rates are close to civil war levels.

They broke records last year, with 41,217 homicides and 25,339 first degree murders over the course of the year. And those are the official figures — which, if anything, tend to under-report reality.

United States President Donald Trump has labelled Mexican migrants heading to the US as “criminals”, but has ironically overlooked the fact that 70% of the guns coming into Mexico originate in the US.

With the recent shooting in the YouTube headquarters in San Francisco, the inspiring movements of young people demanding gun control, and Black Lives Matter protesting police impunity, the issue of systemic, deathly violence in the US is receiving important attention.

But the impact of that violence outside US borders largely goes under the radar.

In every measurable way, the US is head honcho of the global violence industry. It is the biggest arms exporter, it dominates global military spending, and it sold the majority of guns, globally, in 2016 (Britain comes second with just under 10% of gun sales). It has been the leading arms dealer in the world for 25 of the past 26 years.

It is hard to estimate how many deaths the US is responsible for overseas, especially indirect ones and those that have resulted from illegal gun trading.

It is important to consider how the US’s violence overseas contributes to a culture of violence and a glorification of murder within its borders. It is also important to remember how profitable the arms industry is. Like the drug trade, US companies have every interest in a strong demand for guns in and outside US borders.

An IBIS report on the guns and ammunition manufacturing industry noted: “In response to a weakening domestic military market, industry players have increasingly sought growth in exports”. That growth in exports has been a key factor in the percentage of murders committed in Mexico with guns increasing from 15% in 1997 to 66% last year.

Now, there are about 300 million guns in Mexico — despite the fact that the country has just one shop (hidden discretely down a small lane in the capital) where they may be bought.

Indeed, the Western media focuses on the drug trade across the Americas, but ignores the gun traffickers coming from the US who are exploiting US gun laws to sell guns over the border.

Tamara Pearson (@pajaritaroja) is a long time Latin America-based journalist and author of The Butterfly Prison. She blogs at Resistance Words.