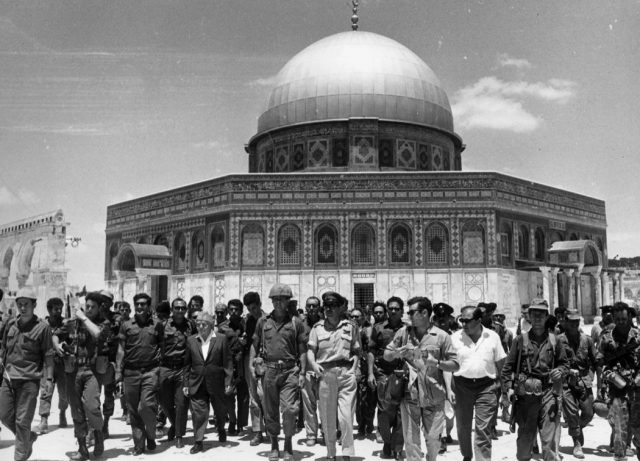 There is a saying that goes: “Be careful what you wish for, for you may get it.” This has been Israel’s dilemma from the very beginning.

The Zionist movement, which held its first conference in Basel, Switzerland 120 years ago, wanted Palestine but not the Palestinians. They achieved this objective 50 years later, in what Israel termed as its ‘war of independence.’

Then, in 1947-48, the Palestinian homeland was captured, but millions of Palestinians were cruelly evicted following a harrowing war and many massacres.

That dynamic was not at work when the rest of historic Palestine was occupied during the war of 1967.

Ali Jarbawi, a professor of political science at Birzeit University, told the Economist that Palestinians were ‘lucky’ that they “were defeated so fast and so massively.”

The rapid events of the war made it too difficult for Israel to ethnically cleanse East Jerusalem, the West Bank and Gaza, as it did to hundreds of Palestinian towns and villages, during what Palestinians call the Nakba of ’48 – the ‘Catastrophic’ loss of their homeland.

Well, perhaps ‘lucky’ is a bit of a stretch, since the last 50 years of military occupation has wrought untold pain and misery on occupied Palestinians. It has been a period in which international law has repeatedly been broken by Israel. It has been a period in which Palestinians escalated their resistance, non-violent for most of it, but violent at times. The price was, and remains, terribly high.

This resultant reality drove Israeli commentator, Gideon Levy, to declare in a recent article in Haaretz that in the “terrible summer of 1967,” Israel had “won a war and lost nearly everything.”

The loss that Levy refers to is hardly material. “A state that celebrates 50 years of Occupation is a state whose sense of direction has been lost, its ability to distinguish good from evil, impaired,” he wrote.

The loss for Palestinians, however, was far greater. They watched as Arab armies were either defeated on a massive scale, or simply evacuated their positions, conceding East Jerusalem without much fighting.

Indeed, the defeat brought shame, but also the realisation that Palestinians must claim their own position at the center of the fight. The events of the war made that realization quite effortless.

On the morning of June 5, 1967, the entire Egyptian Air Force was destroyed, its entire fleet still sitting on the tarmac. Within the next 24 hours, the air forces of Jordan and Syria were also pounded.

By June 7, Jordan had ceded Jerusalem and the rest of the West Bank.

By June 10, Israel had captured the Gaza Strip and the entire Sinai Peninsula, from the Suez Canal and down to Sharm-el-Sheikh.

Syria was forced to concede its strategically and economically prized Golan Heights.

Thanks to American and Western support, Israel soundly defeated the Arabs. Within days, Israel had occupied three times more territories than it did post-1948.

While Palestinians experienced another ‘Nakba’ as a result of Israel’s occupation of the West Bank, Gaza and East Jerusalem, Israel celebrated its ‘liberation’ of Jerusalem, and the redeeming of biblical ‘Judea and Samaria’.

In Israel, and around the world, Jewish nationalism took on a new meaning. Israel’s ‘Invincible Army’ was born, and even cynical Jews began to view Israel differently, a victorious state, maybe once an impulsive colonial gambit, but now a regional, if not international, force to be reckoned with.

So much had abruptly changed during those short, but painful, days of war. The existing refugee problem was now exacerbated and compounded by the war and the creation of 400,000 new refugees.

The international response to the war was not promising. The United Nations Security Council adopted Resolution 242, on November 22, 1967, reflecting the Johnson administration’s wish to capitalise on the new status quo, suggesting Israeli withdrawal “from occupied territories” in exchange for normalisation with Israel.

The rest is history, and an agonising one. Israel entrenched its occupation; built hundreds of illegal settlements and is yet to implement a single UN resolution pertaining to the Occupation, or previous violations.

The Washington-led consensus on Palestine perceives no other solution to the conflict but the two-state solution; it deems armed resistance as a form of terrorism; and it sees the Right of Return for Palestinian refugees as impractical.

Palestinians who dare operate outside this “acceptable” paradigm are to be ostracized, boycotted and forced to change.

But the war and occupation has also entrenched the sense of nationhood among Palestinians. Prior to the war, the Palestinian people were fragmented between those who remained in their original homeland – later renamed Israel; those who lived in the West Bank and Jerusalem under Jordanian control, and those in Gaza, under Egyptian administration. Indeed, the Palestinian identity was in tatters.

The 1967 war united Palestinians, although under Israeli political and military control. Within years, the Palestinian national movement was thriving and its leaders, mostly intellectuals from all Palestinian regions, were able to articulate a new national discourse that remains in effect to this day.

On June 7, 1967 when Israel’s Prime Minister at the time, Levi Eshkol, learned that Jerusalem was captured he uttered his famous quote: “We’ve been given a good dowry, but it comes with a bride we don’t like.” The ‘dowry’ being Jerusalem, of course, and the ‘bride’ being the Palestinian people.

Since then, that unwanted ‘bride’ has been shackled and abused; yet 50 years of such mistreatment are yet to break her spirit.

And in that, there is a source of hope. Now that Israel, rich and powerful, has control over the whole of historic Palestine, it also controls a Palestinian population nearly of the same size as the Jewish population living in that same land.

The land is already shared between two people, but under entirely different rules. Jews are governed through a democratic system almost exclusively tailored for them, and Palestinians subsist under an Apartheid regime designed to keep them marginalized, occupied and oppressed.

50 years later, it is crystal clear that military solutions have failed; that Apartheid can only contribute to further strife, bring more pain and misery, but never true peace.

The 1967 war is a lesson that war is never the answer, and that a shared future is possible when we all understand that violent occupation can never bring a just peace. Only co-existence, based on equal rights for both peoples, will.

Dr. Ramzy Baroud has been writing about the Middle East for over 20 years. He is an internationally-syndicated columnist, a media consultant, an author of several books and the founder of PalestineChronicle.com. His books include “Searching Jenin”, “The Second Palestinian Intifada” and his latest “My Father Was a Freedom Fighter: Gaza’s Untold Story”. His website is www.ramzybaroud.net.

Source: Politics for the People