Interview of A. Vltchek: The United States, police brutality and the possibilities of a fundamental change 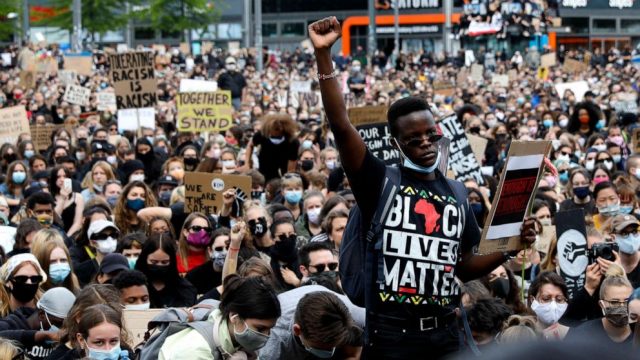 Erkin Oncan interviews Andre Vltchek on the nature of the protests in the US and on the possibility to bring a fundamental change of US society.

EO: How do you evaluate the George Floyd protests? Do these actions lead to a positive permanent change in the country? Is there a possibility like that?

AV: George Floyd’s death was the last drop, at least for many. The country has exploded. Or more precisely, many of those who were, for years and decades oppressed, left voiceless and humiliated, rose, and demonstrated their indignation. I strongly believe that the United States cannot be reformed, anymore. It is constructed on absolutely despicable foundations: the genocide of the native people, slavery, racial discrimination, and finally, on imperialism and neo-colonialism.

On-going protests could draw attention to horrors through which non-white inhabitants of the USA have to live in the country which is calling itself, cynically, “bastion of freedom”. But in reality, free only for a certain type of people.

As long as it exists in, the regime which is governing the country would never permit any fundamental or what you call ‘positive’ changes.

EO: Are protests just anti-racist or if they have anti-system dimensions? For the demands and participants, what is the nature of the protests? Does it have a class dimension?

AV: I believe that these protests are anti-racist, full stop. More precisely, in their essence they are anti-racist. But, some individuals and groups are also trying to address deep class divisions inside the United States.

Let’s not forget that the entire Western system is endemically racist, so, ‘anti-racist’ is synonymous with ‘anti-system’.

Surprisingly and encouragingly, many protesters are now demanding justice not only for their brothers and sisters but also for the people all over the world; those who have been brutalized and oppressed by Western rulers. This is something that you hardly hear from the US white middle class, which is still generally enjoying privileges of a ‘colonialist master’ and does not want any essential changes in the way our world is structured.

This, in a way, supports my theory that for the Empire, there are only two recognizable races: white and “the other”. And what is happening now on the streets of the American cities – it is all about the race, although many Western political figures and intellectuals are screaming loudly that it is not. For 500 years it has been, and it remains so now.

EO: The harsh attitude of the US administration towards the protests and the statements of Donald Trump have been widely discussed. Is this part of a particular strategy or is it just about the rightist character of Trump?

AV: Singling out Donald Trump as some sort of anomaly in US politics is thoroughly hypocritical. Was the murderous foreign policy of Obama really much better? Did Obama improve the lives of African-American people? Of course not! And Clinton? Yes, both Obama and Clinton had a certain charm, and that is precisely what Europeans loved. Murdering innocent millions in Africa or the Middle East, no problem. As long as the U.S. Presidents know about (Western) etiquettes, table manners, all the rest is forgiven.

Of course, such individuals like Donald Trump or George W. Bush are dangerous brutes, but in general, their deeds are the same as those who are, in front of cameras, behaving in a much more suave manner.

What you are asking could be easily answered: “harsh attitude” would be applied against the protesters under any U.S. administration. Brutality is essentially used by Washington, since the birth of the nation. Protesting native Americans were slaughtered in what could be defined as genocides. Rebelling slaves were raped, tortured, and killed. Students protesting against the wars were fired at and killed. What is happening now is bad, terrible, but not at all new.

EO: Some analyzes, especially in the western press, have taken the protests together with the Hong Kong riots. As if they were part of the process of action. Is this true?

AV: Some, in fact, many analyses, are manufactured simply in order to confuse the public. Events in Hong Kong and Minneapolis are diametrically opposite.

In Hong Kong, where I spent weeks and weeks analyzing the situation, mostly young people got derail by the British education system, by Western propaganda, and by direct involvement of the European and North American embassies and organizations. Foreign interests have been obvious: to damage China, to discredit its leadership, and to cause as much harm as possible. There has been nothing even remotely ‘spontaneous’ when it comes to the riots which erupted in Hong Kong.

In the United States, police brutality and awful death of Mr. George Floyd, brought instinctive indignation and rage to the countless communities and cities, all over the country.

In Hong Kong, anti-Beijing riots are based on speculations such as “what if China acts a certain way, and uses absolutely legitimate laws in a certain manner?” While in the United States, fears are not just fears – they are reality: overcrowded, often privatized penitentiaries, holding the highest number of prisoners in the world! Unimaginable police brutality. Thousands being gunned down by police, many of them members of the ethnic minorities.

And if you take it to the global level: millions directly and indirectly, through proxies, butchered in all corners of our Planes, to satisfy political and economic interests of the Western Empire: in places like DR Congo (watch my film Rwanda Gambit on the topic), West Papua, the Middle East to name just a few. Because human lives in those places matter nothing. Because they are not white.

The United States and Europe are creating or at least supporting genocides. China does not. China is building hospitals, schools, railroads, highways, and factories. It is obvious which system is scarier. And against which our planet should be rebelling against!

EO: What happens next in Floyd’s actions? What predictions can we make?

AV: Protests may eventually wind-down. Or they may not. It depends on who will join; how many people will get inspired.

Death of Mr. Floyd is both real, terrible death of a human being and a symbol.

Recently, I wrote an essay “The world cannot breathe!” Squashed by the US – A country built on genocide and slavery”. Murder in the city of Minneapolis became a big international issue. It appears that it could trigger a global uprising against Western imperialism.

Of course, the United States and Europe will do all in their power to trivialize the rebellion.

Many of their citizens are now talking and writing banalities: about “peace”, “love”, and that “race does not really matter”. Of course, for the ruling race and ruling culture, the status quo is the most desirable outcome: People protest, then they go home, and everything remains as before. Black men and women continue getting tormented. The world, basically the non-white world, is forced to live in subservient conditions. Millions will continue dying, so the privileged ones could live their fortunate lives.

History of over 500 years, in which the white Western powers have reduced the rest of our Planet to a concentration camp, is being swept under the carpet, and thoroughly censored.

One day, this kind of arrangement of the world will collapse. One day; either very soon, as a result of what we are witnessing now, or in a not so distant future. It is because such ‘arrangement’ is morally wrong and unsustainable.

Revolution will not come from the West. Not even from the Western so-called Left. Western Left is now up to its neck in conspiracy theories, blaming Soros and others for ‘financing the African American “riots”’.

Revolution will come from the outside – from the oppressed world. And the minorities in the United States will join because they are part of both the ‘outside’ and the ‘oppressed’ part of our Planet.

[First published by Sputnik, in Turkish]

Andre Vltchek is a philosopher, novelist, filmmaker, and investigative journalist. He has covered wars and conflicts in dozens of countries. Six of his latest books are “New Capital of Indonesia”, “China Belt and Road Initiative”, “China and Ecological Civilization” with John B. Cobb, Jr., “Revolutionary Optimism, Western Nihilism”, a revolutionary novel “Aurora” and a bestselling work of political non-fiction: “Exposing Lies Of The Empire”. View his other books here. Watch Rwanda Gambit, his groundbreaking documentary about Rwanda and DRCongo, and his film/dialogue with Noam Chomsky “On Western Terrorism”. Vltchek presently resides in East Asia and Latin America and continues to work around the world. He can be reached through his website, his Twitter and his Patreon.

In almost all western colonies no alternative views allowed, victims blame themselves

Borneo – not just nature, a great ancient culture has also been destroyed