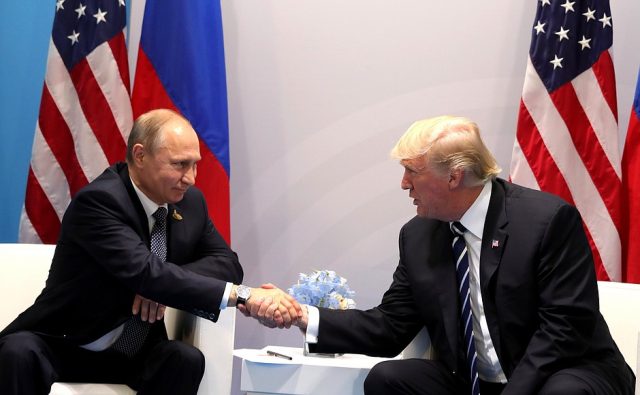 After six solid months of co-ordinated allegation from the mainstream media allied to the leadership of state security institutions, not one single scrap of solid evidence for Trump/Russia election hacking has emerged.

Truth disappeared so long ago in this witch-hunt that it is no longer even possible to define what the accusation is. Belief in “Russian hacking” of the US election has been elevated to a generic accusation of undefined wrongdoing, a vague malaise we are told is floating poisonously in the ether, but we are not allowed to analyse. What did the Russians actually do?

The original, base accusation is that it was the Russians who hacked the DNC and Podesta emails and passed them to Wikileaks. (I can assure you that is untrue).

The authenticity of those emails is not in question. What they revealed of cheating by the Democratic establishment in biasing the primaries against Bernie Sanders, led to the forced resignation of Debbie Wasserman Shultz as chair of the Democratic National Committee. They also led to the resignation from CNN of Donna Brazile, who had passed debate questions in advance to Clinton. Those are facts. They actually happened. Let us hold on to those facts, as we surf through lies. There was other nasty Clinton Foundation and cash for access stuff in the emails, but we do not even need to go there for the purpose of this argument.

The original “Russian hacking” allegation was that it was the Russians who nefariously obtained these damning emails and passed them to Wikileaks. The “evidence” for this was twofold. A report from private cyber security firm Crowdstrike claimed that metadata showed that the hackers had left behind clues, including the name of the founder of the Soviet security services. The second piece of evidence was that a blogger named Guccifer2 and a website called DNC Leaks appeared to have access to some of the material around the same time that Wikileaks did, and that Guccifer2 could be Russian.

That is it. To this day, that is the sum total of actual “evidence” of Russian hacking. I won’t say hang on to it as a fact, because it contains no relevant fact. But at least it is some form of definable allegation of something happening, rather than “Russian hacking” being a simple article of faith like the Holy Trinity.

But there are a number of problems that prevent this being fact at all. Nobody has ever been able to refute the evidence of Bill Binney, former Technical Director of the NSA who designed its current surveillance systems. Bill has stated that the capability of the NSA is such, that if the DNC computers had been hacked, the NSA would be able to trace the actual packets of that information as those emails travelled over the internet, and give a precise time, to the second, for the hack. The NSA simply do not have the event – because there wasn’t one. I know Bill personally and am quite certain of his integrity.

As we have been repeatedly told, “17 intelligence agencies” sign up to the “Russian hacking”, yet all these king’s horses and all these king’s men have been unable to produce any evidence whatsoever of the purported “hack”. Largely because they are not in fact trying. Here is another actual fact I wish you to hang on to: The Democrats have refused the intelligence agencies access to their servers to discover what actually happened. I am going to say that again.

The Democrats have refused the intelligence agencies access to their servers to discover what actually happened.

The heads of the intelligence community have said that they regard the report from Crowdstrike – the Clinton aligned private cyber security firm – as adequate. Despite the fact that the Crowdstrike report plainly proves nothing whatsoever and is based entirely on an initial presumption there must have been a hack, as opposed to an internal download.

Not actually examining the obvious evidence has been a key tool in keeping the “Russian hacking” meme going. On 24 May the Guardian reported triumphantly, following the Washington Post, that

“Fox News falsely alleged federal authorities had found thousands of emails between Rich and Wikileaks, when in fact law enforcement officials disputed that Rich’s laptop had even been in possession of, or examined by, the FBI.”

It evidently did not occur to the Guardian as troubling, that those pretending to be investigating the murder of Seth Rich have not looked at his laptop.

There is a very plain pattern here of agencies promoting the notion of a fake “Russian crime”, while failing to take the most basic and obvious initial steps if they were really investigating its existence. I might add to that, there has been no contact with me at all by those supposedly investigating. I could tell them these were leaks not hacks. Wikileaks. The clue is in the name.

So those “17 agencies” are not really investigating but are prepared to endorse weird Crowdstrike claims, like the idea that Russia’s security services are so amateur as to leave fingerprints with the name of their founder. If the Russians fed the material to Wikileaks, why would they also set up a vainglorious persona like Guccifer2 who leaves obvious Russia pointing clues all over the place?

Of course we need to add from the Wikileaks “Vault 7” leak release, information that the CIA specifically deploys technology that leaves behind fake fingerprints of a Russian computer hacking operation.

Crowdstrike have a general anti-Russian attitude. They published a report seeking to allege that the same Russian entities which “had hacked” the DNC were involved in targeting for Russian artillery in the Ukraine. This has been utterly discredited.

Some of the more crazed “Russiagate” allegations have been quietly dropped. The mainstream media are hoping we will all forget their breathless endorsement of the reports of the charlatan Christopher Steele, a former middle ranking MI6 man with very limited contacts that he milked to sell lurid gossip to wealthy and gullible corporations. I confess I rather admire his chutzpah.

Given there is no hacking in the Russian hacking story, the charges have moved wider into a vague miasma of McCarthyite anti-Russian hysteria. Does anyone connected to Trump know any Russians? Do they have business links with Russian finance?

Of course they do. Trump is part of the worldwide oligarch class whose financial interests are woven into a vast worldwide network that enslaves pretty well the rest of us. As are the Clintons and the owners of the mainstream media who are stoking up the anti-Russian hysteria. It is all good for their armaments industry interests, in both Washington and Moscow.

Trump’s judgement is appalling. His sackings or inappropriate directions to people over this subject may damage him.

The old Watergate related wisdom is that it is not the crime that gets you, it is the cover-up. But there is a fundamental difference here. At the centre of Watergate there was an actual burglary. At the centre of Russian hacking there is a void, a hollow, and emptiness, an abyss, a yawning chasm. There is nothing there.

Those who believe that opposition to Trump justifies whipping up anti-Russian hysteria on a massive scale, on the basis of lies, are wrong. I remain positive that the movement Bernie Sanders started will bring a new dawn to America in the next few years. That depends on political campaigning by people on the ground and on social media. Leveraging falsehoods and cold war hysteria through mainstream media in an effort to somehow get Clinton back to power is not a viable alternative. It is a fantasy and even were it practical, I would not want it to succeed.

Clinging to Collusion: Why Evidence Will Probably Never Be Produced in the Indictments of ‘Russian Agents’