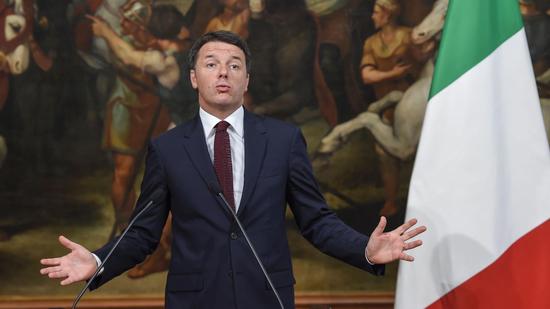 Investig’Action : One week ago, former Italian prime minister Matteo Renzi announced his resignation following his referendum debacle. Over 60% of voters (with a record turnout of 68%) rejected Renzi’s proposed changes to the Constitution, one of the most progressive constitutions in Europe and throughout the world, borne out of anti-fascist resistance. This widespread popular rejection is a consequence of the ultra-liberal, reactionary drift of the social-democratic government of the Democratic Party (PD), in line with EU diktats. This vote follows the NO of the 2015 Greek referendum and Brexit. Progressive and left-wing forces should now get to work in order to stop this extremely heterogeneous space of popular dissent from falling into the hands of populist right-wing forces. For genuine leftist forces, it is crucial to seize this moment and bring forward a coherent, class-based argument that sets them apart from right-wing populist groups, and take back their place alongside the popular interests of the oppressed classes.

On the 4th of December, the Italian people, including those living abroad, will have to decide whether or not they approve Matteo Renzi’s Constitutional Reform. A broad coalition is asking the Italians to say « no » to the social-democratic PM’s proposition. The « No » coalition is worried that a it would give more power to the Government, thus helping the EU to impose its diktats.

According to Renzi, the Constitutional Reform should simplify political decisions by erasing the equal power of the two Parliamentary Chambers – the Senate and the Chamber of Deputies. The Senate would lose some of its competencies and wouldn’t be directly elected anymore, and according to the Government this would save 50 million euros.

Many experts strongly believe that this statement is incorrect. For them, abolishing the Senate altogether would be much more efficient, if simplifying political decisions is the goal, thus saving 540 millions euros saving and stopping any conflict between the two Chambers from occurring.

The anti-reform forces say that the aim of this political maneuver is actually different. Beyond any simplification of the administrative machinery, it is meant to give more power to the Government.

In fact, Renzi wants to triple the number of citizens required to propose a bill to parliament, from 50.000 to 150.000. To opponents, it clearly shows that there is a link between the reform project and the new electoral law. This new law, which Renzi and Berlusconi elaborated together, gives a bonus to the largest political party. It would allow a party with only 24% of the vote to grab the majority of the seats in the Chamber, and elect the Presidents of the Republic and the Constitutional Court. Also, Italians living abroad would lose a big part of their electoral rights.

This concentration of power in the hands of the Government is an old dream of Italy’s right wing. For at least twenty years, the top circles of Italian politics have been trying to reform the Constitution. Created after the Second World War, the text contains many progressive aspects thanks to the influence of the anti-fascist resistance.

In 2006, the former PM Silvio Berlusconi tried to make a reform which was prevented by the Italian people in a referendum. Matteo Renzi’s government and his Democratic Party (PD) are now putting forward a proposal which is very similar to Berlusconi’s. Some « Yes » supporters have used this similarity to convince the right-wing electoral base. Employers associations such as Cofindustria, corporate banking institutions, Chancellor Merkel and even the American Ambassador in Rome are also in favour this initiative. The EU, for its part, hopes that it will make the introduction of antisocial reforms easier.

Renzi’s reform was endorsed by a large majority in Parliament, where any debate with the opposition was kept to a minimum. To avoid any dissent in Parliament, Renzi’s PD even changed the composition of a parliamentary commission to ensure a quick approval of the measure.

Against this majority, a broad « No » coalition, composed by labour unions such as the CGIL, regular trade unions and leftist political parties like Rifondazione Comunista, Sinistra Italiana or the new Italian communist party, was formed. Pepe Grillo’s Five Star Movement and a left-leaning part of the Christian Democrats are also calling for a « no » vote. Moreover, the coalition is running a campaign against the reform in other EU countries since Italian nationals living abroad who are members of A.I.R.E. (Association of Italians living abroad) will be able to vote by mail during the first two weeks of November.

This large coalition now hopes to defeat this reform. For its part, the EU worries that a « No » victory would mean the end of Renzi’s reign and bring to power a coalition which is much more critical of the EU.