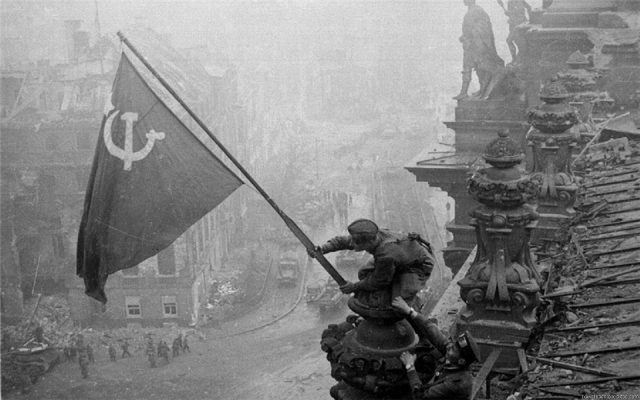 How could the Great Patriotic War in which the Soviet people (including many members of my own family) lost at least 25 million lives, have anything in common with the latest outbreak of the novel coronavirus?

You think this is an absolutely insane question?

However, before you dismiss it, think twice. There are similarities how they are being portrayed. There is a dangerous, even deadly pattern.

The storylines of both monumental events have been shamelessly kidnapped, and perverted by Western propaganda!

Those people and countries that fought hard and heroically, have lost the narrative. At the same time, those who negotiated, to twist and to delay their involvement, have managed to re-write history and to even give themselves the credit for ‘saving the world’.

The greatest sacrifice in human history, that made by the Soviet people who fought for the survival of mankind, defeated Nazism, and later helped to de-colonize the world, has been belittled by the professional masters of disinformation in London, Paris and New York. The Soviet Union itself was first smeared, its history rewritten in hostile foreign countries (to the extent that even the Soviet people themselves began doubting their own past and present), its internationalist duty discounted and dragged through mud. In the end and mostly as a result of such intellectual aggressions, a tremendous country and the bulwark of anti-imperialism, suddenly collapsed.

No shots were fired, except in Afghanistan, which was virtually sacrificed by the West. It has been converted into a playground of radicals and religious fundamentalists. In the end it broke the spine of the Soviet Union, the country that had been skillfully maneuvered into the conflict by Washington, and which, against all practical sense, decided to rush to the rescue of the Afghan people.

This, last chapter of Soviet history, has been twisted and perverted, too, in Washington and London.

In fact, everything pure, heroic and positive that the Soviet Union represented, was spat on.

The anti-Soviet, and even anti-Russian narrative has become absolutely bulletproof.

Manipulative documentary films, books, school curriculums in Europe and North America; they all pass off as facts in simple propaganda gigs, without offering any evidence. Very often, they take historic events and data, twist them, turn them around, and repeat the consequent fabrications again, again and again.

There are thousands of mass media outlets participating in the project. It definitely works. Such an approach is effective. Deadly effective.

China is now being beaten with the same stick as the Soviet Union, and Russia.

The most populous, successful, and enthusiastic Socialist country still does not fully comprehend, what is being done to it. China is trying to be a good world citizen. It does its best to show kindness and solidarity. And yet, the more positive its deeds, the more it gets antagonized, accused of selfishness and malignancy.

The Western propaganda apparatus is now determinedly smearing the Chinese revolution, the Chinese Communist Party, and the Chinese system. Tiananmen Square ‘events’, which were invented by thoroughly hostile Western mass media outlets, are used as proof of China’s “evilness”. Present-day Hong Kong events, a direct attack on China and interference in its internal affairs, are turned upside down. Beijing is being portrayed as the aggressor, not as the victim!

Newspapers like The New York Times or The Independent have absolutely nothing good to say about the socially most successful country on Earth.

That is quite an impressive show of one-sidedness.

Before Western propaganda got involved, kicking into top gear, people in all corners of the world were tremendously impressed with the rapid and determined response of the Chinese system. China isolated one province, quarantined it, and defeated the pandemic within a few weeks. Almost immediately, it began helping the rest of the world.

The Chinese government, Chinese scientists, and the Chinese population in general, had no idea what were they up against. They were all alone, facing the new virus. Intuitively, in a socialist way, they mobilized, won the battle and defeated the pandemic with minimum losses and in the shortest possible time.

While several Chinese officials and scientists believed that the virus was injected into China by the United States, Beijing decided to adopt a conciliatory tone, suggesting there should be cooperation, instead of confrontation.

That is the Chinese, but not Western way.

The Western approach towards the COVID-19; from Italy, UK, Spain to the United States across the Atlantic Ocean, has been grotesque, inconsistent, disorganized and for the common people, deadly. In short, it has been a total fiasco.

Therefore, using its traditional methods, Western propaganda system began doing what it does the best: attacking those who are fighting for the survival of the world. Attacking relentlessly, aggressively and often, vulgarly.

If the numbers were to be compared, the entire affair would look ridiculous, even grotesque. The West would soon run out of arguments. The same, if the Chinese and Western general approaches were placed next to each other and analyzed.

But they are not. What is done in Europe and North America is not really reporting or comparing facts. Instead, it is a constant flow of an ideological, propagandist narrative, of disinformation, full of sarcasm, double speak and mud.

The discourses of the U.S. politicians are increasingly racist, perverse and full of spite. When it comes to China, Western leaders lie, they present no proof, but in this ‘game’, all the above is obviously allowed. One after another, they get on the proverbial podium and spit at China: all of them do – Trump, Pompeo, Navarro, Rubio, and others.

The better China does, the more they shout and spit.

The better the Soviet Union did, the louder the accusations against it were, the more brutal the insults.

Now China says loudly and clearly: “We have pulled almost everyone out of poverty. We are a real Socialist country with Chinese characteristics, governed by the Communist Party of China. We are helping the struggling part of the world through the BRI (Belt and Road Initiative). We fought hard and defeated the new and terrible pandemic.”

Western ideologues shout back: “No you are not helping anyone. You are selfish. You are not even socialist. You misinformed us about the pandemic.”

The problem is, the Western regime owns and controls incomparably more media outlets than do China and Russia combined. And both the Russian and Chinese media outlets, including this magazine – New Eastern Outlook – are constantly censored and blocked in the Western countries, on-line and otherwise. It goes without saying, that the Western propaganda is the biggest, and the mightiest disinformation system on the planet.

In the meantime, tens of thousands are dying from the COVID-19, but now especially from the economic and social manipulation, in Europe, North America and their client states in the poor parts of the world.

The contrast is tremendous, if one is allowed to the see that contrast.

It is obvious which system is better for humanity, but the more obvious it gets, the more disinformation blurs the picture; the compliments of the Western media outlets and ‘educational’ institutions.

While all this is going on, people in the West are increasingly complacent, sheepish, and indifferent.

In his recent interview for the RT, the legendary German film director, Werner Herzog, brought up some essential and relevant philosophical points:

“The atrocities carried out by the Nazis were the result of a lockstep narrative of “demonization” which replaced facts.”

“It is not so much what is factually happening, it’s who owns the narrative. And we have to be very, very careful and watchful about looking at the media. What are the media doing? Is there some sort of almost collective brainwashing going on or not? … [W]e have to be quite vigilant and we should think on our own.”

What we are witnessing or participating in, is a horrific, ideological battle. Not just for China, not just for Russia and for the memory of those who gave their lives for the survival of our human race.

Right now, everything is at stake. Perhaps the very essence of mankind.

It is still possible to win. Partially, because Western propaganda, while effective, is not necessarily innovative. It is relatively primitive. It can be exposed. While it repeats its lies, relentlessly and religiously, we have to repeat that the lies are lies, and offer proof.

Let us do it with determination, and in full voice.

“75 years ago, it was the Soviet Union who defeated Nazi Germany, and saved the world, at an unimaginably high cost!”

Andre Vltchek is a philosopher, novelist, filmmaker and investigative journalist. He has covered wars and conflicts in dozens of countries. Five of his latest books are “China Belt and Road Initiative”, “China and Ecological Civilization” with John B. Cobb, Jr., “Revolutionary Optimism, Western Nihilism”, a revolutionary novel “Aurora” and a bestselling work of political non-fiction: “Exposing Lies Of The Empire”. View his other books here. Watch Rwanda Gambit, his groundbreaking documentary about Rwanda and DRCongo and his film/dialogue with Noam Chomsky “On Western Terrorism”. Vltchek presently resides in East Asia and Latin America, and continues to work around the world. He can be reached through his website, his Twitter and his Patreon.

Why I Reject Western Courts and Justice